ST:HMB Phantom of the Cybersphere, Part 8

One of the great things about having talented friends is that they can make your characters sound smarter than I am. Many thanks to Karen Ullo for helping me with Enigo. 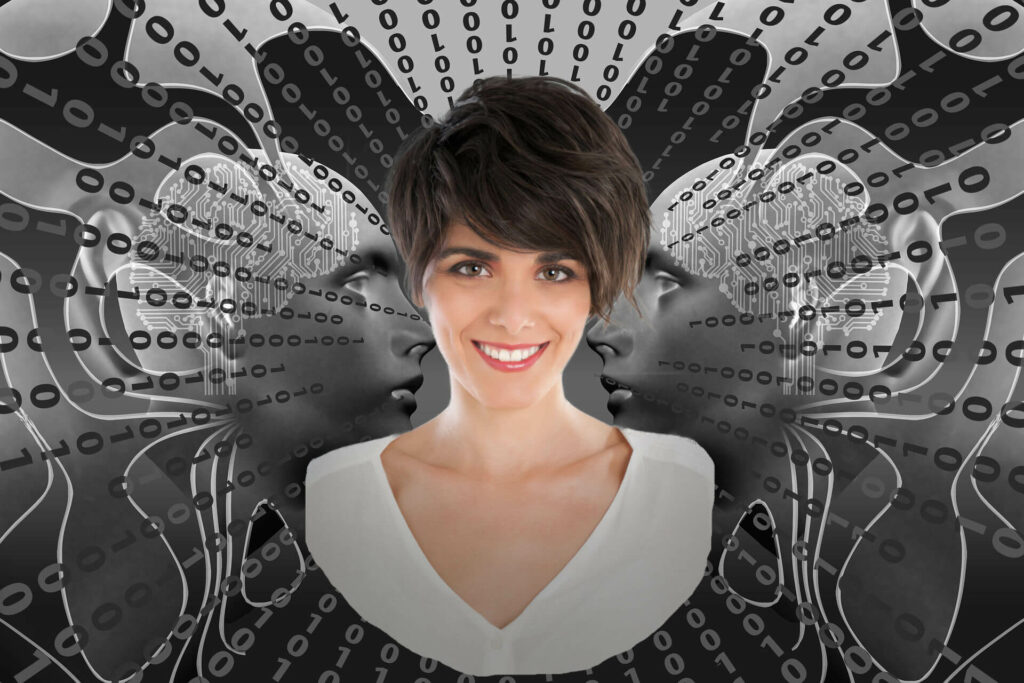 Ellie nodded and smiled at Enigo as she entered the lazivator and asked it to take her to the Bridge. He had his guitar, so he must be going to play somewhere. How nice that he and his cousin got to have fun while the rest of the team was working so hard.

She squashed the annoyed thought from her mind, determined to let nothing ruin her good mood. She’d had a great afternoon with Raoul in which they’d used an Altonian Schrodinger code to compensate for the stacked overflow of stringly typed Heisenberg algorithm. And to think that only yesterday, she didn’t know what half of that meant.

In her mind, the phantom sang, I told you that you were a genius.

It seems so easy when I’m learning with you.

“Who are you talking to?” Enigo asked.

Ellie blinked, thrown from the world of her mind. “What do you mean? I didn’t say anything.”

“No, but you’re humming in conversation.”

He hummed the phrase the phantom sang to her. “D-Flat Major, tempo Andante. Then you follow up with -” He hummed her phrase. “F Major, tempo Allegro. It’s not the same song, and it’s not a mash-up. It’s a musical conversation.”

She felt her mouth fall open. She heard the phantom whispering to be careful, to deny everything. “Wow. You really did major in music.”

His eyes narrowed. “Don’t change the subject. You’ve been doing this for three days, ever since you got unnaturally smart about programming.”

“Unnatural? Really?” She tensed up, waiting for him to tell her there was no way she could be so smart. After all, she wasn’t smart enough to save Loreli, right? Or maybe he would bring up some story his precious prima had told him about how she screwed up on the Mary Sue.

The phantom sang: They don’t know you, Ellie, like I do.

Instead, he said, “Doall, you’re not acting like yourself. I know it’s not Raoul. He’s as surprised by your insights as the rest of us. He’s not spending extra time with you – for teaching or anything else.”

The lazivator started a reggae beat.

ELLIE (Tune of Little Mermaid, “Under the Sea”)

Is this what you all think of me?
Is this why you spy on me?
Do you think I am that stupid?
You think that I can’t study?

“Uh, uh! This is not about how smart you are, and you know it.” Enigo said, and grabbing his guitar, strummed in C Major, tempo Lento.

ENIGO (Tune of Angel of Music from Phantom of the Opera)

How did you gain this Cyber insight?
Really, it’s unexpected
Does it involve this conversation
Going on in your head?

The power of his song wiped away her bright tune. She couldn’t even hear the phantom’s voice. Despite herself, she answered in the same song, instinctively taking on the second part.

ELLIE
I know that this will sound crazy
I hardly believe it myself.
I’m falling asleep while I study.
I can’t help myself!

Then, when I dream
I dream of coding
I dream that he’s there beside me.
He nudges my thoughts and guides my theories
He’s the key to my genius.

ENIGO
Ellie, this dream man’s suspicious
The fact you don’t see it is, too.
Ellie, we’re going to Sickbay.
He’s manipulating you.

ELLIE
Enigo, the Chief of Paranoia!

ENIGO
Chica, that is my job!

ENIGO
Yet, have I ever been wrong?

The doors opened then but to the bridge, not Sickbay. It was a sea of calm after the stormy argument. Misha was warming up on her harp and everyone was quietly attending to their tasks, conversing normally. Ellie strode out. Maybe Enigo would show some decorum and leave her alone now.

Instead, he said, “Captain, Ensign Doall needs to go to Sickbay.”

“I’m fine!” she snapped even as the Captain and First Officer were rising from their chairs to look at her.

“Captain,” Enigo pressed, “I believe an unknown entity may be influencing Ensign Doall through her dreams or the Cybersong. We should sound Intruder Alert.”

“That’s ridiculous!” Ellie shouted. “I’m fine. He’s just jealous because I’m going to kill this Cybersong virus while he plays around with his music major!”

The harp was between her and her station. With a roar of frustration, she lashed out. The harp topped out of Misha’s grip and fell to the ground with a musical cry.

All conversation stopped. Everyone stared at Ellie.

The Captain broke the silence. “All hands. This is the Captain. Listen up:”

CAPTAIN (To the Tune of Beverly Hillbillies)

Let me tell you all a story about the Impulsive
Damn Cyber virus has made our brains a sieve.
And it’s getting worse because now it seems
A Cybersong may have access to our dreams
To manipulate our minds.
Guard your thoughts.
Intruder alert.

The next thing you know, we could be going mad.
Take precautions – any to be had.
And if you’ve found you’ve been dreaming about the job.
Alert your supervisor and the doc.

The Captain clicked off the intercom. “Ensign Doall, report to Sickbay and get checked out. Let’s not take any chances. Lieutenant, escort her if you would.”

“I can go by myself,” Ellie protested.

His tone was so fatherly and kind, any argument would have made her seem more a child than she’d already been acting. Misha was picking up the harp. A string had broken.

People were still staring at her.

“Yes, sir,” she murmured and returned to the lazivator. Once the doors had closed, her anger returned, and she rounded on Enigo.

ELLIE (Tune of “Track Down This Murderer” from Phantom of the Opera – start at 2:08)

Enigo! You have betrayed me.
Enigo! Why do you hate me?
And to think I thought that we were friends.

ELLIE
Your prima! I know she hates me.
Your prima’s turned you against me!

ENIGO
Now I know you’re off the deep end.

ELLIE
Enigo! Enigo! If we are friends, then just let me go.

JANBOT
Come to me. Come to me, Ellie…

The lazivator doors opened, and she rushed out, but naturally, he was faster. He grabbed her and pulled her toward Sickbay. She dug in her heels and twisted her hand in the move he’d taught the crew for breaking a hold. Desperation gave her strength. He let go, and she ran down the corridor, but not fast enough. He caught her by the shoulder. Before she could react, he’d spun her around and scooped her over his shoulder in a fireman’s carry.

ENIGO
We’ll discuss this later
‘Cause you aren’t thinking clearly
But of course, I’m your friend
And the ship’s family.

As you know, the Emergency Photonic Medical Technician, known as Doc Sorcha, has never felt the need to embrace humanity and makes good use of the fact that she’s an artificial intelligence part of but separate from the Impulsive. Therefore, as soon as Enigo had entered the room, Ellie pounding on his back and demanding to be let go, she had already done a preliminary scan of both humans, found Ellie to be in neurological distress while Enigo was just extremely annoyed, and gotten a medical bed ready. Nonetheless, it didn’t stop Enigo from voicing the problem even as he dumped her patient on the biobed.

ENIGO
Order up a brain scan now!
There must be something in Doall’s head.
Ellie, just tell her – there’s no need to shout.
When the exam is all done, you can go home and pout.

Ellie, it’s me. Relax, lay back now.
Tell me what you’re thinking.

DOCTOR
This scan will show…

ELLIE
All around me.