ST:HMB Phantom of the Cybersphere, Part 6

I hope all of you are enjoying your copies of Space Traipse: Hold My Beer, Season 2. Remember – reviews are the love language of authors! (If you read Season 1, please post a review on it, too. It’s never too late!)  But you are here for the musical episode. So, snap your fingers! While LaFuentes is playing his heart out in the mess hall, Ellie’s mind has been taken over by a Cyber-enhanced Janbot. Let’s enter her dream world and see what happens! 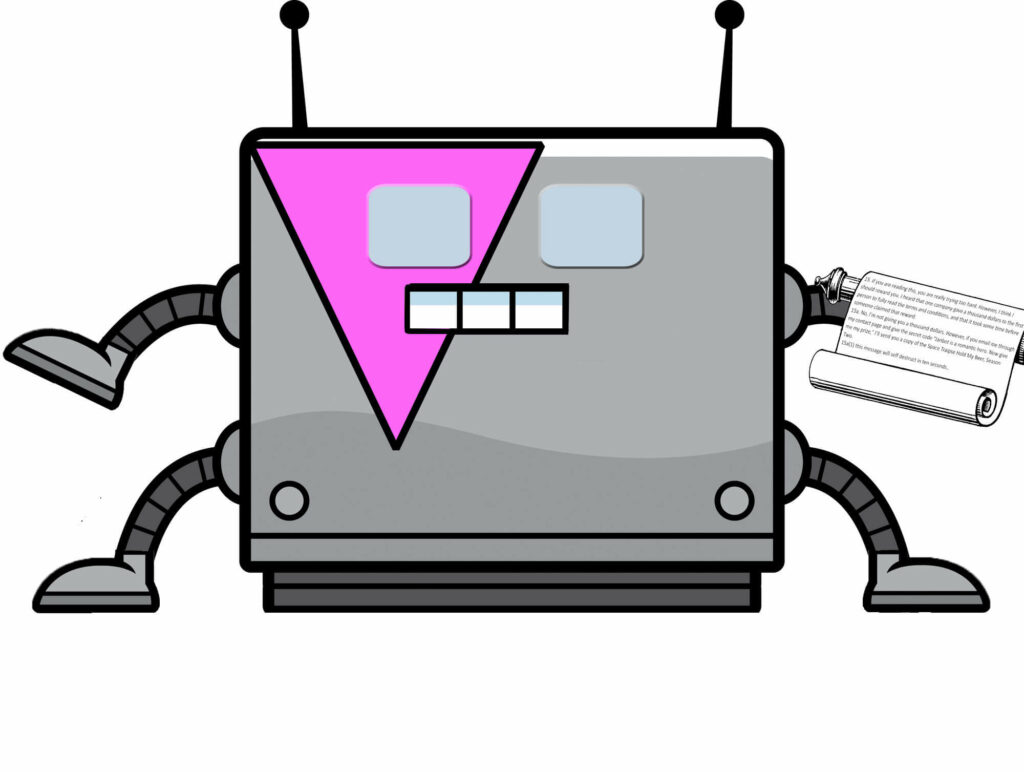 ELLIE (Tune of Little Mermaid’s “Part of Your World”)

Why am I here
What is this place?

JANBOT (spooky and far away)
Ellie…

Ellie jumped and spun, but there was no one to see.

ELLIE (still Little Mermaid’s “Part of Your World”)
Whose is that voice?
Won’t you show me your face?

“Show yourself!” she shouted.

No more thoughts of failing
Forget your wide-eyed fears.
I’m here, with you beside you.
I’ll guard you and I’ll guide you.

Why are you holding me here?
I haven’t done anything!

JANBOT (Switching to “The Point of No Return”)

I have brought you
To fulfill your deepest urge –

“Raoul?” Ellie said. “I’m…flattered, but this is a little weird.”

JANBOT
I am not that Raoul. Now be silent.
Silent.
I have brought you
Because of your need to save your ship.
There’s code in your mind that you don’t understand and yet
If I’m by your side you’ll completely conquer it.
I will mentor you; you’ll save the day
Decide now. Decide now.

ELLIE (still Little Mermaid’s “Part of Your World”)
I don’t understand. Are you the ship?
Am I in a computer or is this a trick?

JANBOT (Now in Little Mermaid style)
You’re smarter than that.
You’re the girl
The girl who does everything.

Suddenly a glowing form appeared before her. It was in Union Common, but the paragraphs were long, full of subparagraphs, and comprised of convoluted sentences. No matter how she tried to concentrate on it, she couldn’t. Some instinct told her it was just like any other form she’d ever read and not worth her time. In the meantime, the phantom voice sang seductively.

JANBOT (Back to tune of “Point of No Return” from Phantom of the Opera.)

Click Consent. There’s no return
No backward glances.
It’s your only hope to save your crew.
Click Consent and no return.
You’ll be a hero.
Redeem yourself and show up Perez, too.

Ellie reached for the big friendly button, but then pulled back. “But what if I can’t do it?”

The phantom laughed warmly, and the sound caressed her soul like dandelion blooms. “Of course, you will. You’re Ellie Doall. You just need the right instruction.”

ELLIE
I have come here
Desperation showed me the way.
In my mind, I’ve become protégé to you
Mentor me kindly. I’ll be protégé to you.
I’ve made up my mind.
There’s no turning back.
I’ve decided.

I’ll click Consent and no return.
Let’s get to coding!
Teach me the way to stop this Cybersong!

With a quick movement, she smacked the button. A large “Thank you” made of dandelions showed up on the screen, then faded. Ellie held out her hands to the code dribbling down the walls. One line peeled away and snaked itself around her arm. This time, she met it without fear. The code tickled. It was strangely pleasant. Then, she realized she knew what the line meant.

Excitement fueled her desire to know more. She thrust her other hand toward the wall. This time, instead of a single line, entire subroutines flowed toward her. They surrounded her, lifting her from the floor. She gasped, with surprise, with pleasure, with understanding.

Around her, the music she’d only been distantly aware of swelled to a crescendo.

JANBOT
Now we are one
In the coding of the night!

The next morning, Jeb joined his First Officer in the shuttle bay, where Enigo and Lieutenant Perez’s team had an interesting discovery to share. They crowded into the small back room of the shuttle, where one wall held a screen with different graphs and lines of information. Raoul sat in the only chair where he operated the computer.

Enigo, Jeb noted, stood in the back, leaning against the wall while trying to not show how much he needed the wall for support. His gaze was sharp, focused, but the bags under his eyes and the determined set of his mouth belied his exhaustion. Before he’d come, he’d read a report their holographic doctor had sent him about the physical and emotional state of their Chief of Security.

Even if he hadn’t known, he’d have heard it in the music.

Donna waved her hand dismissively. “Sí, sí. He’s always been a prodigy. But what else do you hear? Or rather, not hear?”

When she said it, it was so obvious. Jeb answered, “No one is singing. But they are talking.”

Enigo hummed assent. “Normal conversations, the entire time I played and about half an hour after I stopped.”

“Extraordinary! Is it because of the song, the guitar or the player?”

Perez pulled up some schematics of the brainwave activity of Enigo and some of the crew members in the mess hall, the vibrations of the guitar, and the sheet music of the song. “A little of each, we think. We tried several things over the past few days, and the most effective counter to the Cybersong virus requires the vibrations of a sufficiently complex musical piece played by a skilled musician – one whose corpus callosum and executive function are well developed. In some ways, it mimics parts of the Filedise kuricrearrogance program.”

“So, we infected ourselves when we tried to upload the program?” Jeb asked.

“No, sir,” Enigo said. “We sent it to an independent server isolated from the Impulsive and contained by firewalls.”

“And we have the code installed at Starbase 0b101010. No one there is singing. We’ll deal with the origin later. Right now, the important thing to understand is that with the right music and the right musician, we can counteract the virus on a temporary basis. That buys us some time while Raoul and his team work on a countervirus to attack it at its source.”

“Best news I’ve heard in weeks. Lieutenant LaFuentes, I want you to find any other qualifying musicians on the crew and recruit them on this project. But first – take a nap. Get something from Doc Sorcha if you need to. I want you fresh for your next performance. That’s an order,” he added as Enigo opened his mouth to protest.

“I’ll call in Straus to cover you,” Smythe added. “This project is now your top priority.”

“Yes, sir.” Enigo pushed off the wall with less than his usual zeal. He bumped fists with his cousin as he left. The door closed just as Enigo was pulling his cousin aside to keep her from walking into Chief Dour’s latest teleporter stream.

Just then, Ellie rushed into the room. Unlike Enigo, she looked harried and flustered, but completely awake.

Perez gave her a smile full of teeth and insincerity. “Well, perfect timing as usual!”

Ellie ignored her. “I’m sorry, Captain, but I think I may have the start to how we defeat the Cybersong virus.”

Raoul spun around in his chair. “What? But last night, you said you didn’t understand the code.”

“Well, I didn’t. But last night, I went over it again, and I realized the Higgs-Bugson wasn’t a design flaw, but a back door. After that, things started falling into place.”

Everyone gaped at her. Then, Raoul spun back in his chair and started calling up the code. “Omigosh. I think she’s right.”

“It’s obvious once you see it, right?” Ellie giggled.

“And this came to you. Just like that?” Perez asked.

Now Ellie’s eyes flashed with anger. “No, not ‘just like that.’ I worked hard to figure this out.”

Jeb held up his hands placatingly. “And we’d expect nothing less. Good work, Ensign. Great work, all of you. Now we’ve got two ways to attack this.”

Jeb half expected a snide remark from Lieutenant Perez. He knew the two had history from their time on the Mary Sue. Instead, however, the Union officer said, “Yes. We’re splitting the team into two. Each will pursue different angles.”

“But I’m liaison officer! Maybe I can help.”

Perez looked at Jeb in a way that could not be called “pleading,” but was certainly asking that he back her up. He said, “We need a permanent solution, Ensign, and that will only happen with a countervirus. That’s your priority.”

← Previous: Space Traipse: Hold My Beer, Season 2 is available! Next: ST:HMB Phantom of the Cybersphere, Part 7 →