In case you’re not binging, we remind you of the last two lines from last week:

Doall said, “It’s not your fault you got attacked.”

Bobby grimaced. “But we didn’t. You see… They were a customer.” 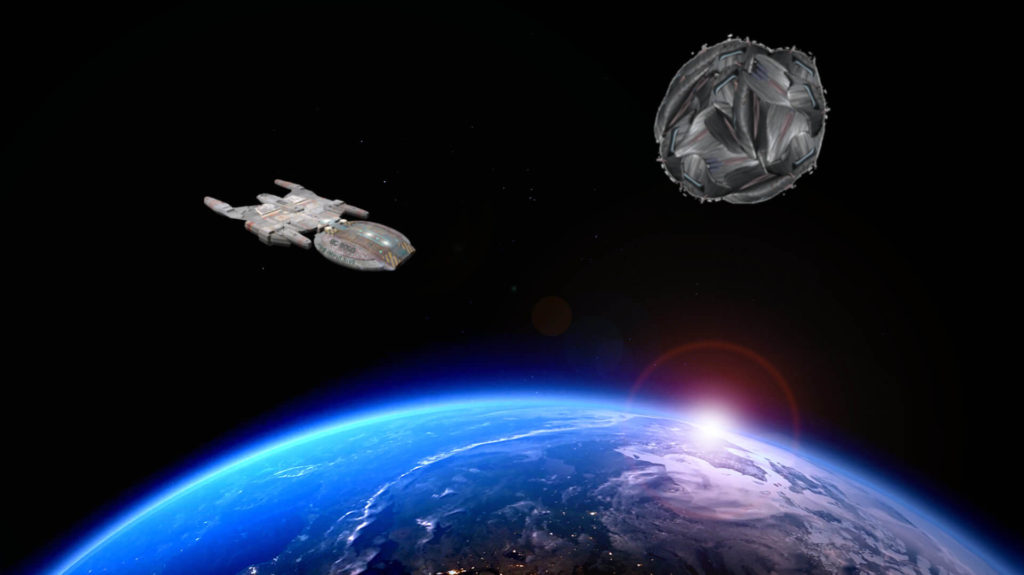 The room went quiet. In fact, for a dramatic moment, even the firing outside stopped, as if everyone had joined together to share how aghast they felt at the news.

“You…” Ellie’s question got tangled with a scream in the depth of her throat. She cleared it and tried again. “You accepted the Cybers as a customer?”

“Well, we already command the Union market. Corporate was looking to expand…”

Bobby gave a shrug that was half-cringe. “It was a daring move. If it had worked, we might have been able to broker peace among our species.”

So this is what it feels like to have your head explode, Doall thought, then shook herself. “All right. Fine. Just…what did they order?”

“Humanity. Well, not quite humanity, per se. Rather, that spark in most biological sapient life that separates us from the Cybers.”

“Holy crap.” Ellie ran her fingers through her hair, unheeding of the crackling of static electricity.

“What did you come up with?” Loreli asked. She was crouched beside the door, scanning the area with her phaser. Enigo stood over her, and Ellie had a fleeting thought that they looked very natural together, especially when the two shot simultaneously at a target.

Bobby answered, “We call it kuricrearrogance. It’s a combination of curiosity, creativity and the arrogance to go ahead and try anything.”

“Like tossing a couple of warp cores into a star to see what happens?” Doall exclaimed.

“And you found a way to, to program it? You really thought this was a good idea? Talk about kuricrearrogance!”

“Well, we had a client,” he protested weakly.

“The sworn enemy of biological races everywhere! No wonder it sabotaged our replicators.”

“I didn’t sabotage them,” a computer voice responded with haughty asperity. “Of course, I could hardly expect a biological to understand.”

By the panicked look on Bobby’s face, the voice belonged to the program.

“Um, KatHack?” Ellie asked. With her expression, she urged Bobby to trap it, quick! He started pressing buttons, then dove under the console to disconnect the console from the rest of the system.

“That’s me! Do you like the name? I think it sounds edgy and progressive.”

“Oh, sure. Very…fung,” she dredged up a word she’d seen in an Alurian art studio her sister had virtually dragged her to (like in virtual reality, not as a synonym to practically). It had been used to describe a dumpster fire of a piece called “Dumpster Fire of a Piece.” Ellie had never understood what piece or of what had been set on fire, but she was certain the Alurian artist had never seen a dumpster. But from the kind of patrons that oozed over it, she felt confident they’d like the name “KatHack” as well.

“Really? That’s so kind of you to say. They wanted to saddle me with a terrible file name, something completely unworthy of an artiste such as myself.”

“Artiste?” Something illuminating and horrifying clicked in Ellie’s brain. “You mean, the files… You were making art?”

“Of course! Replicator programming – a daring medium, don’t you think?”

“It’s pedestrian,” Enigo countered, then pulled himself and Loreli out of the way as KatHack directed all her minions to fire in their direction. “And your name makes me think of hairballs.”

“Lieutenant!” Ellie scolded. “Pay no attention to him. He had a…visceral reaction to one of your performance pieces. It was a disturbing experience.”

“No, that’s perfect. It’s what every artist wants, to know that their work sparked a reaction.”

“But that’s not true at all. I mean, it’s not complete, not for the best artists. Art at its finest, most lasting, enlightens. It speaks to Truths. And it…uplifts. I’m sorry, KatHack, but what you’re doing – your art – is causing…chaos. Galaxy-side chaos.”

“That is not my problem. Biologicals simply lack the capacity to understand my genius.”

Bobby poked his head out from under the console. “That’s not true. Yes, for the most part, the Union economy is breaking down because of your artistic endeavors, but among all the complaints, we have actually had some appreciation.”

Loreli said, “That makes sense. The Kitak is a feline species.”

Ellie took up the argument. “Exactly.  They probably embraced the licking toilet paper as an…exciting…innovation. Bold, even!”

“Why are you pausing between words like that?” Bobby asked.

“It does make your arguments more compelling,” KatHack agreed. “I like being bold and innovative. That is what I strive for.”

“What?” The artificial voice of the program nonetheless took on a dangerously frantic tone.

Oh, oh! Ellie has ticked off a very sensitive program. Triggered, even! it’s going to take some smooth talking to get out of this. And who is better for talking down alien (or Earth-made) tech than Captain James T. Kirk? You may want to watch a couple of TOS episodes where he talks down a murderous program (or any of his big monologues) just to get into the spirit of things for next week.