I love when I find some fun images on Depositphotos. Meet Bobby, a programmer who came up the ranks in Filedise from Customer Support. Doncha love his hat? Safety first! 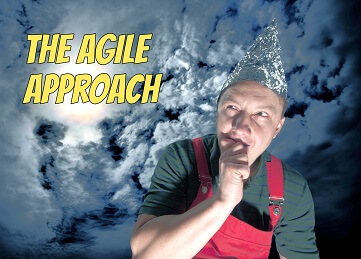 Their Filedesian companion said, “I’m afraid before we say anything more, we need to secure the doctor.”

“From what?” Enigo demanded impatiently, but they ignored him as the soldier wrapped the doctor’s head in sheets of aluminum foil.

“We have to lock the KatHack signals,” the Filedesian explained. “The majority of the population is equipped with a cybernetic implant for communication and data access. The virus – the KatHack – has found a way to tap into it and take nominal control people. The foil blocks the signal.”

“Have you tried colanders?” The words were out of Doall’s mouth before she could stop them.

But he simply shrugged. “Nearly all of them are made of biodegradable compounds, not metal.” Once he was sure the doctor’s head was appropriately protected, he led them across the wide terrazzo. The bold, cheerful purples, peaches and teals and motivational slogans inspired confidence and a can-do attitude. Ellie wondered if that applied to incursions as well as commerce. They passed by a six-foot mural of a smiling woman in earnest conversation with someone outside the image. The caption said, “Customer success begins with transparency.”

As if jolted into action by the none-too-subtle reminder, their Filedisian escort said, “I’m Bobby, by the way. On behalf of Filedise, I’d like to apologize for the inconvenience this cyberattack has caused and assure you we’re doing our best to rectify the problem. We appreciate your collaboration with us. It’s customer input that fosters customer success.”

“Just tell us what the goram plan,” Enigo snarled. His head swiveled from floor to higher staircase, corner to corner. If he noticed the décor, it was only to register it as a distraction. “You do have a plan?”

“Oh, of course. Step one was to take over a headquarters building. Your timely arrival facilitated that, and we’re very grateful. In fact, we’re giving you a 10 percent off on your next order. Step two, we’ll get to the computer core and install a piper program.”

“A what?” Loreli asked. She, like Enigo, was scanning all around them, eyes and phaser tracking together. However, she had also activated the recording device that was disguised as an earring. Despite the official exhortations to corporate transparency, this was one of the most secretive cultures in the Union. Such an opportunity to study their environment and customs might never come again.

“Pied Piper program. We’ll set a clean copy as bait, and when the KatHack starts to invade, it will pull in the rest of the coding with it. With any luck, we can isolate the active, intelligent part of the virus.”

Enigo whistled appreciatively. “Then you can clean up the rest of the systems?”

“Maybe? We’ve not gotten that far yet.”

“What do you mean? You don’t know how to fix the problem?”

“We have teams working on it.”

Enigo actually stopped to stare at him in shock and anger. “Waiddaminute – you attacked a headquarters with only half a plan while someone somewhere else works on the rest?”

“Well, yeah. It’s the agile approach. Don’t worry. We’ve got this. They’re blowing up that JIRA board.”