Last episode took us back to the planet to catch up on Enigo and Loreli. Meanwhile, back on the bridge, Lieutenant Tonio Cruz had moved the Impulsive out of the collision course and activated the tractor beam to catch the Lone Star. He didn’t get any orders to do this; it just came naturally. Where Tonio grew up in rural Southern Italy, “playing chicken” usually meant capturing the fattest one so Nona could stew it that night. 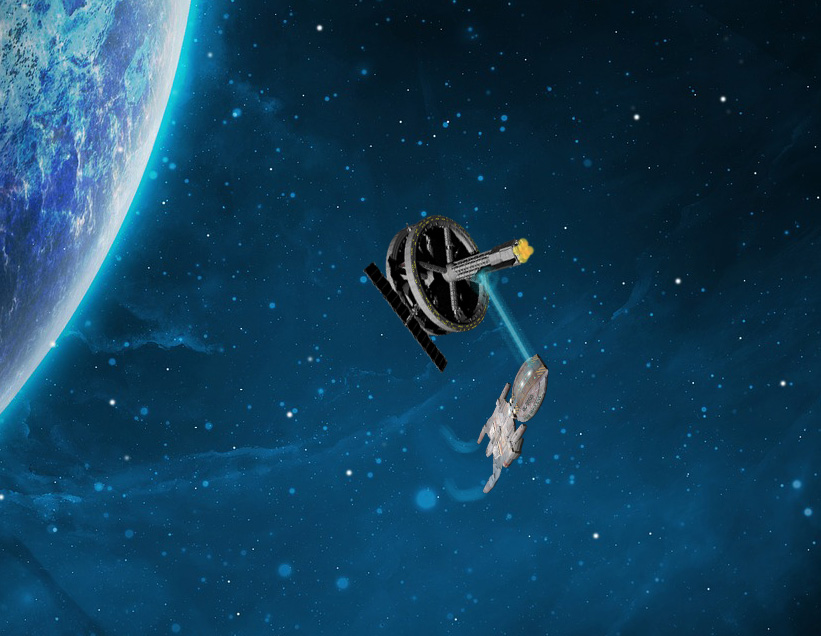 Tonio opened his mouth to report his move, but Gel spoke first. “Captain! CompuSec reports a cyberattack originating from Sickbay. Countermeasures in progress.”

Suddenly, a voice sounded over the intercom. “Fools! Do you think I’m so easily thwarted?”

The Captain groaned. “Oh, come on? So you have psychic abilities now? How’d that happen?”

“Like I should tell you… But why not? Liquid unobtanium is a treasure, sure, but what that mountain did to the Paleos? Imagine if we could do that to already evolved humans! With the Evolved Paleos, I took their secret and made it mine.”

“Well, why’d it turn you into a loon instead of nice, peaceable type like the Paleos?” Jeb asked. As he did so, he pointed at Gel, then the vent.

Gel gave a gelatinous equivalent of a nod of understanding. His brain was so completely different from a humanoid that they were psychically incompatible. He waved a pseudopod at the bullpen and the relief Security Officer leaped out of his seat and hurried to the Security console, staggering on the way to demonstrate his sense of urgency. From the bullpen, more than one junior officer sighed admiringly. Gel oozed into the nearest vent.

Meanwhile, J.R.-through-Nurse-Bradshaw snarled. “You insult me? When I can control your ship and your people?”

“It relieves the stress. Look, cousin: I don’t want to be stuck here and I definitely don’t want to be killed, so how about you give us our nurse back, take a nap and let us capture the Lone Star and we’ll discuss this on the other side?”

“I need that mountain! Humankind needs that mountain if we are to ascend. If we cannot have it, I will destroy it. Now, give me control of this ship, and together, we can conquer the Paleos and take their secret for ourselves. With both our crews Evolved humans, then we will conquer the galaxy!”

“I thought you knew the secret,” Jeb said.

“Metaphorically, fool! There is something in the atmosphere when mixed with the unobtanium as it is processing–”

Jeb interrupted. “Yeah, right. But I thought you said you control my ship?”

J.R.-through-Bradshaw made an impatient sound. “I meant I could! It’d be faster is you’d cooperate. Must I explain everything? Are you truly so dense?”

“Stalling? What do you possibly think – glurb!” Over the intercom, they heard gurgles and grunts. Then, Minion Gel said, “I’ve got him, sir, but he’s fighting me. J.R. has a strong hold on him. I wouldn’t let any other humanoids in here.”

From Security, the acting bridge officer said, “Activate a Level Five psychic disruption field, sir? It could affect anyone within 20 meters.”

“Engines are back online,” Engineering said a moment later.

The Impulsive said, “Listen up, apes and other life forms! We got 4 minutes to be on the other side of that breach. Do you want to be stuck here? Because I don’t. Move, move, move!”

“Shit! Did the Lone Star impale itself on our shields?”

Lieutenant Cruz said, “No, va bene, Capitano. I moved us out of the way and caught it in a tractor beam. Lone Star’s engines are still engaged. It’s orbiting us, which is making us spin in circles, if anyone wants to feign dizziness. Problem is, I can’t move the Impulsive until we can point the right way.”

From Security, the officer said, “The EMP torpedoes! How about if we teleport one into the engines? The blast should knock them out without destroying the ship.”

“All right then. Beer me. Bridge to Teleporters. We got all our people?”

“My Mistress has welcomed Loreli and LaFuentes. They were the last.”

“Excellent! Loreli, get to Sickbay and knock out my cousin by whatever means necessary. Dour, send some torpedoes into the Lone Star’s engines.”

“Are we still under attack?” Dour asked.

“No, but we’re tethered to it, and it’s spinning us in circles.”

“I shall feign dizziness and overcome it to do your bidding.”

“Done. I would lean against the console in exhausted relief, but Lt. LaFuentes has taken that role.”

Doall said, “Lone Star engines are down and we have them within our shields. We are being hailed by the Impartial Brilliance. I told them logic dictates they get the hell out of our way.”

“Great work! Cruz, get us out of here, maximum warp. Break some speed records. Doall, open comms to Chi Nikki Chawa. Ready? Chawa, we’re heading out. Don’t suppose you’d give us an extra couple of minutes?”

Chawa replied, “We cannot pause what we have set in motion, but fear not. Prophecy says you will escape.”

“Well, I don’t know what kind of pretzel that poor girl had to tie herself into to get that, but we’ll take it. About J.R….”

“We can only offer regrets. We had thought the Gift of the Mountain would make him a kinder, wiser man. Instead, his cunning and arrogance dominated. We should not have forced the Mountain to reveal its secrets. Farewell.”

“Two minutes to the anomaly. Warp Eight and increasing,” Cruz reported. In the bullpen, the crewmen were harmonizing a high whine to simulate the strain of the engines.

The viewscreen flickered to life to show the anomaly in front of them, growing bigger on the screen. And on the other side, also gaining on the anomaly, was the huge hull of the Impartial Brilliance.