When last we left, the Lone Star had fired thrusters and was on a collision course with the Impulsive. Now, this is not as bad as it seems – for the Impulsive, that is. With the Wikadas shields in effect, even at low levels, the Lone Star would most likely destroy itself against them before it got to our valiant ship. And if the shields failed, a quick skip in warp would get them out of harm’s way.

Of course, the Impulsive’s pilot, Lt. Tonio Cruz, wasn’t taking any chances. He moved the ship over and caught the Lone Star in a tractor beam as it passed just to be an overachiever.  With the special effects systems still down, there was no surge in ship’s “gravity” or the whine of engines to show it. In fact, the only way Tonio knew it was by the graph on his console which showed a squiggly line a centimeter to the right. Of course, his extreme pilot’s confidence would have told him he succeeded, regardless.

I only tell you this now because I don’t want you to worry while we switch gears and take you back to the planet with Lt. LaFuentes and Loreli. Surely you’ve been wondering what they were doing for the past two and a half hours? 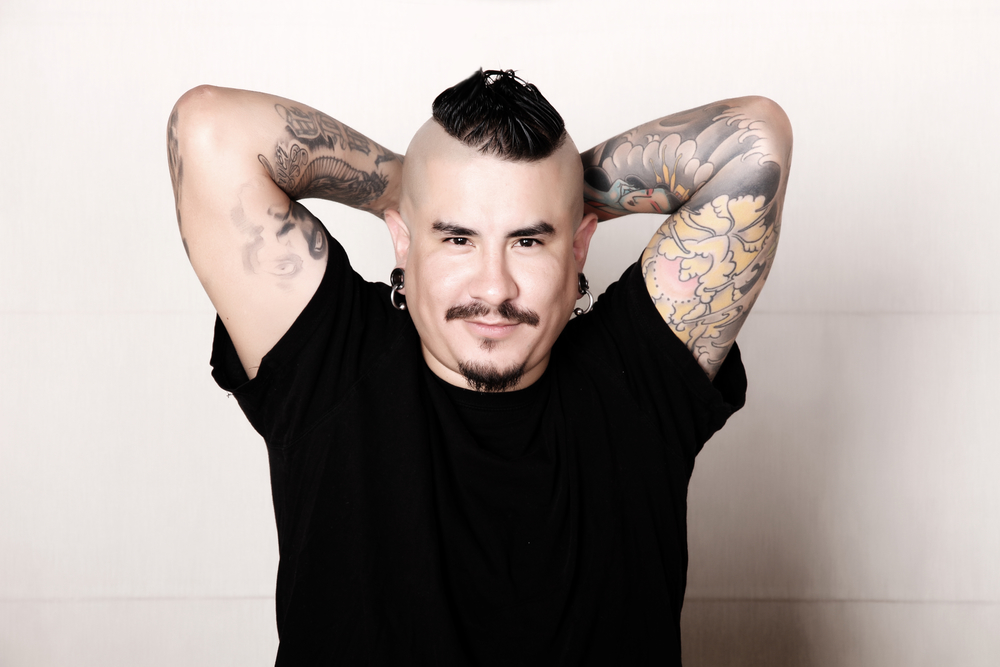 Loreli watched in sympathetic fascination as Chi Nikki Chawa and his cousin continued to torture Enigo.

“No, no, no!” Ta Pala Chawa said. “You flex here!” She poked Enigo on a freshly tattooed spot on his pectoral, just below the armpit.

“Yes! Good. Now hold!” She twisted his arm slightly, the pointed at the line that flowed from his chest to his bicep. “No fist! Loreli, see? ‘Hero of near past.’ Now, fist, Enigo. See? Thick line, ‘Hero of far past.’”

“You’d better be getting this,” Enigo hissed. His face was red and sweaty from effort and pain, and the complex tattoo that ran down the left quarter of his side and much of his upper arm was tender and swollen from Ta Pala Chawa’s prodding and manipulations. This had long since stopped being fun.

“I am, Enigo, and I am recording. Chi Nikki Chawa, if you’d just postpone closing the anomaly, we could take time to learn your language more thoroughly, and with considerably less pain for Enigo.”

Chi Nikki Chawa gave her a sympathetic smile. “It is not for me to decide, Leaf Lady. J.R. himself set these happenings into motion when he made us steal the secret of the Mountain for him. But we would have your people know about ours. Enigo LaFuentes will carry the stories of our people.”

“We could have recorded our cousin.”

“Now, you mention this?” Enigo exclaimed, then yelped as Ta Pala Chawa manipulated his into an awkward angle.

“The Lone Star has, in fact, many recordings of my cousin that I hope they will share, but our history is living, our legends grow – and, as you have seen, the future is foretold in the movements of the history bearers. It is our hope that Enigo LaFuentes carry this gift as well.”

Chi Nikki Chawa started to protest that that wasn’t how it worked, but when his eyes fell to the pattern of lines and he fell silent. His cousin gave a delighted squeal.

At that moment, the communicator chirped with a “Prepare for Teleportation” signal. Chi Nikki Chawa gathered Eigo’s shirt and their equipment and thrust them into Loreli’s arms. He gave her a gentle push toward Enigo.

“Be good to each other!” Ta Pala said as the world around the Enigo and Loreli dissolved to be replaced by a crowded transporter room.

“Aw, man!” Enigo whined as the teleporter effect faded, and then the pain and fatigue hit. His knees buckled. Loreli caught him and eased him to a sitting position at the foot of the teleporter pad.

“I’m okay. I’m okay,” he muttered. Nonetheless, Loreli continued to support him. It was kind of nice. He let himself lean on her. She smelled like a meadow. He closed his eyes and sighed. He’d started the day with a firefight and ended it in the arms of a beautiful woman – and he had a wikadas new tatt. “This was a good day you know?”

Chief Dour leaned over the console to peer at them. “Are you drunk?”