This is the part where it would be a big help to have some awesome sound effects of phasers and photon torpedoes. So here’s a 10-second shot. Feel free to put it on a loop to play while you read. https://www.youtube.com/watch?v=eB8dN7pNJ1o

Realize, of course, that in space, no one can hear you shoot, and for that matter, on the bridge, no one was going to hear the phaser fire, so the computer supplies the sounds, occasionally accompanied by tense mood music, just for occasions like this.

You may not think that this is important, but every first-year Academy cadet knows the story of the HMB Oshittno, whose bridge speakers were knocked out during the first volley with the enemy (at an improbability factor that made the Actuaries swoon.) The bridge crew tried to make do with humming and pew-pews, but the resulting lack of urgency threw them off their combat readiness and they were destroyed before reinforcements could arrive and laugh at them.

They heard a whine as the ship simulated the effort of channeling light energy into the deflector ray to fire in a thin ray at the Lone Star’s shields.

Then, the sound died.

“Are you sure?” Dour asked.

Meanwhile, Jebediah demanded a system’s status on the Impulsive.

“Oshittno.” The captain voiced the thought of everyone on the bridge.

“Aye, sair. The backups, too. I can’t even pull up bagpipe music, let alone Wagner. It looks like sabotage.”

Around the bridge, a few people exchanged glances and shrugs.

“Look alive, people!” Smythe ordered. Immediately, station heads reported the impact to their departments while the second-string crew in the bullpen threw themselves to the ground to create a sense of drama.

The First Officer nodded approvingly, then asked the Captain, “You don’t think J.R..?”

Jeb’s scowl said that was exactly what he thought. “This time, he’s underestimated us. We’ll deal with the sabotage later. We have a mission to finish. Computer, this is Captain Jebediah Tiberius of the HMB Impulsive. Activate Improv Sequence One. Authorization, Code One, One A.”

“Computer, this is Commander Benedict Smythe. Improv Sequence two. Code One, One A, two B.”

A sigh from Engineering, then: “Computer, this is Commander Deary, Chief of Engineering. Improv Sequence Three. Code One B, two B, three.”

Without the special effects, there wasn’t even a beeping and flashing of lights to show the computer making its calculations. Instead, a male voice reminiscent of a twentieth-century country rock star said, “Y’all sure about this?” 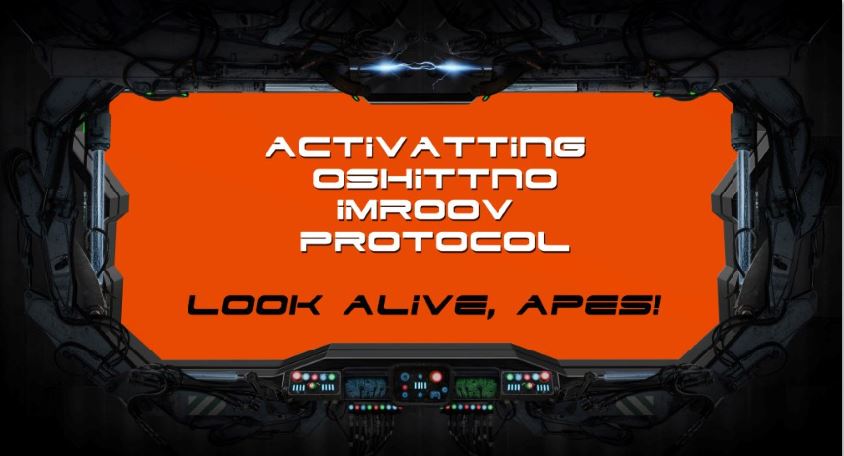 “You got it, Captain.” The computer’s voice grew loud and harsh. “Listen up, apes and gelatins! This is the Impulsive! We got a mission to do and ten minutes to do it in, and slackers are not going to be tolerated. Anybody who lets their reaction times fall below red alert standards is going to get zapped, so you keep your eye on your consoles and head in the game because I ain’t spending a week in dry-dock because you didn’t take things seriously enough. Is that understood?”

“Yes, Pulsie!” The words echoed off the hallways, but of course, the computer feigned deafness and everyone yelled louder…everyone, of course, except Doall, who was monitoring Captain Seip’s progress, the teleporter teams, who were already porting over non-essential people from the Lone Star, the confused Lone Star crew, and one guy in sensor operations who hadn’t really believed the Oshittno Improv sequence was a real thing. That poor minion got a zap to his behind that he would never forget.

And just in time, too, because what the sensor operator saw on his screen made him yelp almost as loud as the Impulsive’s high-voltage motivational goose.

On the Bridge, Doall saw the same thing, “Captain! The Lone Star has fired thrusters and is on a collision course with us!”