All right, people! It’s time to Get Naked and Get Looney! Star Trek fans know and love the episodes ST:TOS “The Naked Time” and ST:TNG “Naked Now.” It’s time for the HMB Impulsive to have its own wacky infection. If you don’t remember these episodes, you might want to go back and watch them. In the meantime, get ready to enjoy ST:HMB “Naked Impulse.” 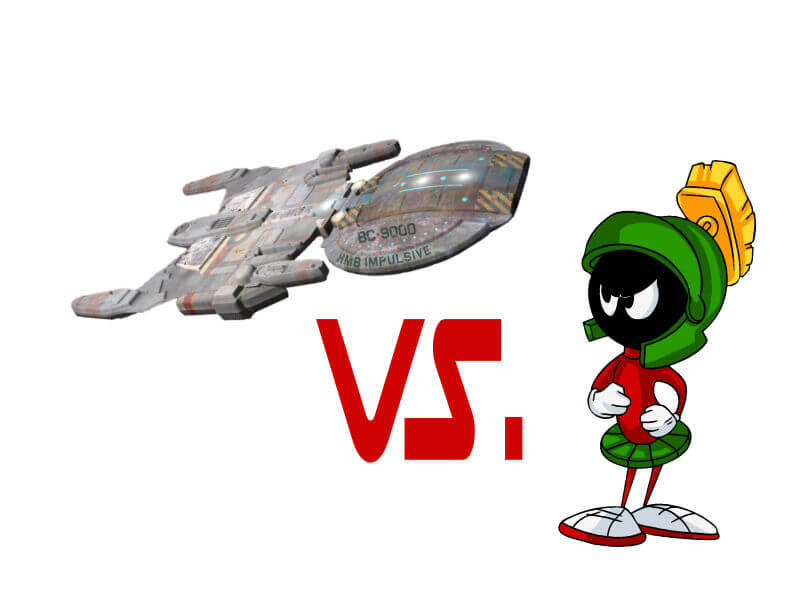 Captain Tiberius is recovering nicely from his concussion after single-handedly fighting the Sllth, a buff, lizardlike alien against whom he was pitted to prove which species was most worthy of getting away with kicking the other’s arse. Doc Sorcha has allowed him to return to his quarters to rest but will not allow him back on duty until he remembers how he tore his shirt.

In the meantime, the Union has noted the Arraganton’s conclusion that we “might be worthy of their friendship in a thousand years” and had flagged the species as DNE-GOT (Do Not Engage Until They Get Over Themselves).

We’re about to investigate the HMB Marvin, which failed to make its regular check-ins twice. Since it’s on the edge of the Cyber’s territory and the Cybers have been completely silent since the incident at Filedise, we’re expecting it’s just a technical error. But if not, we’re hoping that we will find some clue to lead us to our missing comrades.

We found the ship orbiting a red supergiant that is collapsing into a white dwarf. This was not where it should have been, and the only explanation for the change in mission was in the captain’s last transmission: “Watching it being disintegrated makes me angry. Very angry indeed.” We’ve found several airlocks open, and all systems shut down, but no other external signs of violence.

Commander Deary and his team went first and have restored basic power and environmental controls. I’m leaving Commander Paolinelli in charge while I join the team to investigate the ship.

The ship lacked a second bridge control, so everyone teleported to the engineering section. The air was cold enough to cause fog to come out of their mouths when they spoke, and even the special weave of their uniforms did not stop some people from shivering. However, the ghastly scene before them was as much to blame.

The Engineering section was littered with dead and frozen bodies, but not the kind of corpses you’d find if a hatch had been blown or there’d been a malfunction the crew had died trying to fix. Several bodies lay broken and tangled near the warp core; another slumped in front of an outlet. Two pairs of legs stuck out of a Jeffries tube. It wasn’t clear how they died, but there was no doubt what they’d been doing.

Toward the environmental section, another corpse slumped in her seat, as if she’d fallen asleep at her post after turning off the environmental controls. Doc Sorcha was examining the body. She alone of the Impulsive away team did not wear protective gloves. As a photonic being, she was not in danger of contracting any biological agents.

Trash littered the room, and not the kind of debris expected after a fight or a desperate attempt to save a ship. Rather, they saw bottles and sweets, toys, and abandoned articles of clothing.

Lieutenant Leslie Straus stepped up to one corpse and pulled something from his hair. She rubbed it between her gloved fingers, then wiped it off on the dead person’s uniform sleeve. She looked at her hands and did it again. She tsked with disgust when the shiny bits still didn’t all come off.

“Aye!” Commander Deary exclaimed. He sounded especially affronted, and with good reason. Any hint of the pernicious substance on an on-duty engineering crewman was grounds for court-martial. Yet, he had counted at least six people who sparkled.

Enigo was on the second-level section which opened to the warp core. “Commander Smythe,” he called out, “from here, it looks like those people jumped.”

“Suicides?” Smythe asked. That didn’t match the profile of the average HuFleet spaceman, much less a handful all at once and on the same ship.

LaFuentes pointed to one. “I dunno. If they’d wanted to off themselves, they could have jumped straight into the warp core. Instead, they all have partial burns. Look how that one’s hands are reaching out. It was like he was trying to jump the gap and brushed against the shields.”

“So, this was a game?” Lieutenant Ellie Doall, the operations officer, asked. Smythe had brought her on the away mission because he’d hoped the challenge would keep her mind off the fact that she’d not been able to visit her fiancé as planned. Now, he wondered if she might not have been happier sulking on the Impulsive’s bridge. He was rather thinking he would. The whole scene was reminding him of one of the creepier episodes of his favorite show.

Smythe turned to Deary, “What do the engineering logs say?”

In response, Deary waved a hand at the charred corpse. “There arnae any. This walloper here made sure of that. We checked the environmental controls, however, and we didn’t see any indications of an airborne agent.”

Doc Sorcha left the body she was examining to join them. “I’ve not found any traces of viruses or bacteria, Commander. It looks like a bizarre case of mass hypoxia. There have been previously recorded incidents of similarly odd behavior, usually on smaller ships. The ‘space loonies,’ it’s called. However, I’ve only examined one body thoroughly, which is not enough to make a conclusion. I’d like to go to Sickbay and see if there are any medical logs, or better yet, patients I can thaw in quarantine and examine. In the meantime, I advise everyone to keep their gloves on and do not touch the bodies unless necessary. We should also do a full decontamination.”

“Is the bridge safe?” Smythe asked the chief engineer.

Deary nodded. “We’ve got a force field in place and it’s holding atmosphere, but I wouldnae trust it for long. Some radge blasted a hole through their dome. Why they put the bridge on the top of a ship is beyond me. Stupidly vulnerable, it is.”

Smythe nodded. “I couldn’t agree more. There should be copies of the logs in auxiliary control. Lieutenant LaFuentes, you and Ensign Becca escort the doctor to Sickbay. Straus, Doall, and I shall make our way to the bridge. The rest of you work with Commander Deary. Commander, can we make the ship tow-worthy?”

“Aye. We’ll check the status of the structural integrity fields, but it shouldnae take much.”

“Once you’re done, return to the ship and undergo decontamination and full examination. That goes for everyone. Let’s not take chances.”