Certainly, you remember Ellie’s almost love, Raoul. Yeah, she gets over him fast. 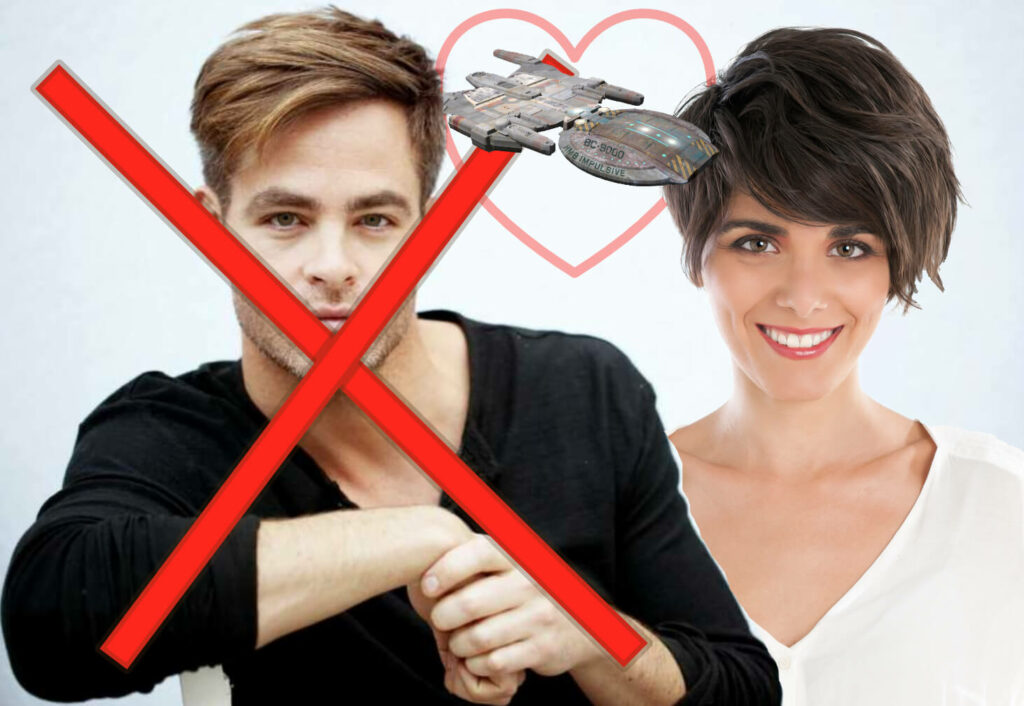 Back on the starbase, Ellie and Company were also enjoying a wide range of beings, having eaten, drank and flirted at several of the establishments on the entertainment ring. Around midnight, most of the party returned to the ship to sleep or sober up before their shift.

“I should go, too. I have that meeting tomorrow,” Ellie said, but for once, her heart wasn’t aligned with her sense of duty. The people responsible for programming the janbots were coming to get briefed and diagnose the security vulnerabilities that let the cybers in. For a few hours, she’d all but forgotten about how Janbot had somehow developed feelings for her and tried to trap her mind in a weird cybernetic universe.

Leslie, of course, picked up on her reluctance. “Oh, come on. It’s a meeting. Sisco is giving the briefing. You’re just there to answer questions about your experience. How much prep do you need for that?”

Misha took her arm. “Please? We’re having so much fun, and I’m not tired yet, and I want to go back to The Protector and do more line dancing. I was just getting the hang of The Thermian!” She let go, to demonstrate, marching along, hands rising along with her knees, as she badly sang a song they’d only learned a couple of hours ago. She managed to stay coordinated until the time came to change direction, in which case, she stumbled into Ellie. She latched onto her both to support herself while she caught her balance and to plead. “Please? We’ll have you home by 0200.”

(In case you forgot how Thermians move…)

Misha squealed with joy, and the three of them returned to their favorite spot of the evening – both for the music and the selection of potential dance partners. They took a table near enough to the floor to be inviting but far enough that they could still talk. Leslie ordered them three Digitizers. They slammed them down quick. Ellie gasped as the liquid fire struck her insides, making them feel like they’d been turned inside out and exploded.

Misha sputtered as she giggled.

Leslie may as well have chugged water. “All right. Now that it’s just the three of us. What the hell was this security report I saw about Dour materializing in your sonic shower?”

“I screamed, of course!” Ellie said, making Leslie bark out a laugh that drew looks from other tables. She waved at them, laughing the whole time.

Misha, however, had lost her giggles. “I didn’t think Dour was like that.”

“He’s not, and that’s what was so disturbing. I mean, he didn’t even look at me. He just stared at the drain and said, ‘The perfect metaphor,’ and then he dematerialized.”

Leslie smacked the table, as if the motion would help her catch her breath. “’The perfect metaphor’? Now that is exactly like Dour. Oh, wow. I wonder if he’s going to write a depressing poem about it. Before me, she stood/Naked in her fury/Out of my shower!”

“As suds flowed to their oblivion,” Ellie concluded, then snickered herself. The Digitizer must have caught up with her.

“Come on. It’s funny. Only Dour could be so oblivious as to ignore a naked woman, especially one as gorgeous as Ellie.”

“Aw, thanks!” Ellie clasped her hands to her chest to contain the swell of love and happiness she felt at the compliment. Or maybe it was the alcohol.

“It’s true, and you know it.” Leslie patted her shoulder, then seeing Misha’s incredulous look, turned serious. “Weird things happen in space, Meesh. Like with you and Gel. He’s still upset about it, you know. He never meant to go creepy ooze monster on you. The blook Vis drugged him silly.”

“What we discuss here stays between us three girls,” Leslie promised.

“We just hate seeing you two like this,” Ellie added.

While Misha decides what to say next, let’s do a quick catchup for those unfortunates who have not read “Amock Time” in Space Traipse: Hold My Beer, Season 2, and don’t know what’s going on. When Gel became an ensign, the ruling genetic authority on his planet decided it was time for him to come home and fulfill his procreative responsibilities. To ensure he did so, they slipped him a hormonal subpoena. (Yes, legally induced pon farr. You’re welcome.) However, his assigned mate, Vis Koos, manipulated the chemicals in the said subpoena to make him lose his self-control, hoping he’d make a fool of himself in front of everyone so she could reject him. If you want to know how things end, go read the story. (Hint: Gel made the Impulsive proud.) What you do need to know here is that Misha had gone to talk to him while he was out of his right mind and didn’t understand what was going on, and he tried to envelop her. Things have been tense between them since.

It’s a very unfunny part of an otherwise humorous parody of ST:TOS’s “Amok Time,” which is why we’re addressing it more now.

As the narrator provided backstory and Ellie squeezed Misha’s arm reassuringly, Leslie was giving the room a casual surveillance. Misha didn’t notice, and Ellie wasn’t insulted. She knew it was a habit ingrained in her friend after a year on the Impulsive under Lieutenant LaFuentes’s tutelage. When they first came in, Leslie had noted the exits, cataloged the potential weapons (bottles, chairs, a Raisian’s stunner – about as effective as watered-down mace would be on humans), and calculated the distance to the bar. Ellie guessed she was reevaluating the threat level – or maybe the party potential.

Leslie patted Misha’s hand, but with a subtle gesture directed Ellie’s gaze to a trio of guys a couple of tables away, also engrossed in conversation with one morose member. Nice looking, the lot of them.

Misha finally said, “He apologized, and I know he feels awful. It’s just… After it happened, every time I see him, I could feel goo oozing up my legs…”

“No, I get it,” Leslie said. “I have to train with him – or more to the point, against him. We all do. After the first couple of sparring sessions, I had to take a long shower. I think all of us did. If it helps any, I don’t think he’s always comfortable about dealing with solids all the time.”

Misha paused, considering. “That kind of does. And really, he wasn’t malicious or anything, just confused. I do forgive him. Problem is, even though I’m getting past the actual incident, things are so weird between us, I don’t know how to act. Seriously, where in HuFleet do they teach you how to handle it when one of your crewmates starts acting like carnivorous slime?”

“I think the L.T. is working on it,” Leslie said. She caught the attention of the waitress, an easy thing to do since she was a Pelotann and had three faces in her round head, and ordered three more drinks.

“A pool, you mean,” Misha said. “I heard. I thought about it, but let’s face it – our job is to explore the galaxy, and I’m an exobotanist. There’s a good chance I may one day get attacked by sapient slime. First time might was well be a friend.”

The waitress set three more glasses on the table, so they toasted to friendly slime and first times. Leslie must have ordered something different because this time, it just burned instead of reversing the polarity of her innards. Or maybe she was just getting inured. She was starting to feel pleasantly lightheaded, so that when the three guys introduced themselves and asked to join them, she was only too glad to make room. She turned to give one a perky, winning smile, and looked straight into the most beautiful, soulful eyes she’d ever seen.

“I’m Todd,” he said. His accent tickled her ears. His shy smile held a hint of sadness. She had the crazy urge to kiss it away.

“Oh.” The word came out as a small gasp. Her body felt like goo, and she totally wanted to ooze herself all over him. She mentally strangled the thought and the metaphor as a bad idea and held out her hand instead. “Ellie.” Despite the confidence cliché said came with alcohol and a promotion, she spoke at half her usual volume.

“It’s a pleasure to meet you, Allie.”

“Yes,” she agreed, and didn’t bother to modify her statement. She knew immediately that he understood her.