ST:HMB Phantom of the Cybersphere, Part 5

One of my fans asked that Janbot make another appearance. I’m not sure this is what he had in mind… 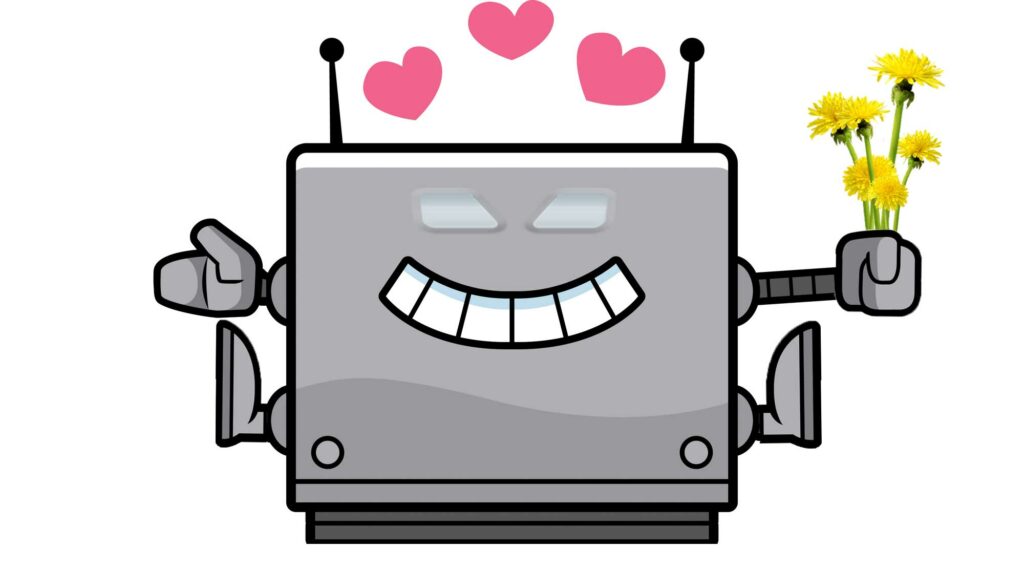 The biggest difference between the mess hall during mid-shift* was the lack of main characters. After all, they had to sleep sometime. They usually only came by when doing a morale walkabout for their subordinates or when the plot called for one to make an appearance.

Enigo pushed back the urge to rub the sleep from his eyes. To do so would show weakness, and he’d never do that around anyone from the Hood, even if it was his own flesh and blood. He hadn’t slept well since Loreli died. When he did nod off, it was to tortured dreams of Loreli being killed. Each time was a different way: phaser fire, spacesuit failure, a possessed lawnmower. Once, she’d even been pecked to death by one of LeRoy’s chickens.

The guitar on his back had felt heavy, and not because he was tired. He’d been trying to teach Loreli the guitar, but her fingers were too soft. He could still hear her laugh as she tried to play a chord, only to have the notes sound muffled and flat. Kind of how his life felt now.

Beside him, his cousin surveyed the noisy mess. “This is perfect. You need an audience.”

“You sure we need to do this?” He scratched at the back of his ear where Doc Sorcha had put neurological sensors that fed his readings into Donna’s tablet. About a third of the crew wore them now.

She looked at him like he’d gone mad. “Are you the same primo Enigo who never said no to a public performance?”

“That was college. And bars. I was mostly anonymous. These are my shipmates.”

“There I played to show up rivals and woo women. I ain’t doing neither now.”

Her expression softened in sympathy. She set a hand on his shoulder. “I know. Lod siento, primo. Lod extrento siento.”

Then, her expression brightened and hardened. “But this is important, too, so suck it up, babimann. They need you.”

He looked at the diners – or rather, he listened. Conversations carried out in music of conflicting keys. Tempos that never stayed steady – except for Gel’s, but Glop-bop had a rhythm foreign to human ears. He sounded like a boiling mud bath.

Everyone wants to be a lead, Enigo thought. No one has the skill or gumption to take over.

“Fine.” He crossed the threshold like he was going on stage as he swung the guitar into position. He stuck the chord, played three notes, then stuck two more chords.

The Cybersong virus had somehow affected people’s hearing as well. Heads turned even from across the room.

As he moved into a complex series of sixteenth notes played allegrissimo, he realized he did have rivals here – the virus, the Cybers. Grief and despair. He was going to show them all up. No one bested Enigo Guillermo Ricardo Montoya Guiterrez LaFuentes.

Soon, he was lost in the music. He didn’t notice as the cacophony of songs died out, and normal conversations took their place.

Ellie sat at her desk with three screens active in front of her: One held the code Raoul was working on. After Perez had left, he’d contacted her and tried to show her what they were doing. Perez was right. She didn’t understand 90 percent of it. Her second screen held multiple windows with their research so far. The last held a programming manual and a dictionary. Next to her keyboard was a box of tissues. There was a pile of used ones on the floor.

What is this line? What does it mean?
Why can’t I understand what’s on my screen?
Aren’t I known as the girl
The girl who does everything?

Raoul was so sweet as he taught me.
Why does he think of my idiocy?
He only knows me as the girl,
The girl who does everything.

‘Cause miracles, I have done plenty
I’ve taken on Cybers and more.
I’ve figured out subspace anomalies
But no big deal, no one cares
Loreli’s gone!

I need to save the ship one more time
I just want to stop
Stop everyone singing.
Raoul says the code’s apophasic
But what does that mean?

I’ve got to learn
And learn it fast!
The time of my failing must move to my past.
Impulsive needs me.
But I just don’t see
What this line means.

Outside her door, Janbot paused. The nanites had alerted him to Ellie’s distress. Now was the time to act – but not before it had its own musical introspection.

No more thoughts of dusting
Begone, those greasy floors!
She’s here! With me, beside me
I wish that she’d ally me
What if I could teach her
And gain her love that way?
Ellie! If only you’d see me
And hug and kiss and squeeze me!

Say you’ll share with me
Four-point-five times ten to the eighth seconds
Roughly till I’ve passed my warranty!
I would bring you bouquets full of roses
Unless you’d prefer the jerky blooms!
Oh, Ellie, if you’d just notice me.

As Ellie paused to blow her nose with an unmusical honk, the doors slid partway open and Janbot entered, a handful of dandelions in his hand. She looked guiltily at the pile of used tissues beside her seat.

“Oh, Janbot, I’m sorry. It’s just, I’ve been trying all night to figure out this code, and… Never mind. Are those for me?”

She reached out to take the flowers. Her fingers just grazed his metal hand, but it was enough. A small spark passed between them. Ellie’s eyes rolled into the back of her head, and she passed out.

Janbot caught her before she spilled out of her chair and leaned her against her desk.

*If this sentence seems incomplete, remember that there are two kinds of people: Those who can extrapolate from incomplete data.**

**Didn’t understand that statement? Remember: there are 10 kinds of people in the world: Those who understand binary.***

***OK, guys, this is just getting meta, now. If you still don’t get it, say something in the comments or catch me on Facebook.

← Previous: ST:HMB Phantom of the Cybersphere, Part 4 Next: Space Traipse: Hold My Beer, Season 2 is available! →