Last week, Doall explained that Commanders Deary’s and Jardin’s NO-BRAINR device was somehow causing physics to rewrite itself, and the captain agreed the best plan was to blast it into oblivion. He sent Lt. LaFuentes ahead to make the recalculations (remember the weird pockets of inertia and who-knew-what other changes in the laws of physics) while he set Deary and Jardin to figuring out what caused their device to go awry. Now, they are returning to the bridge. 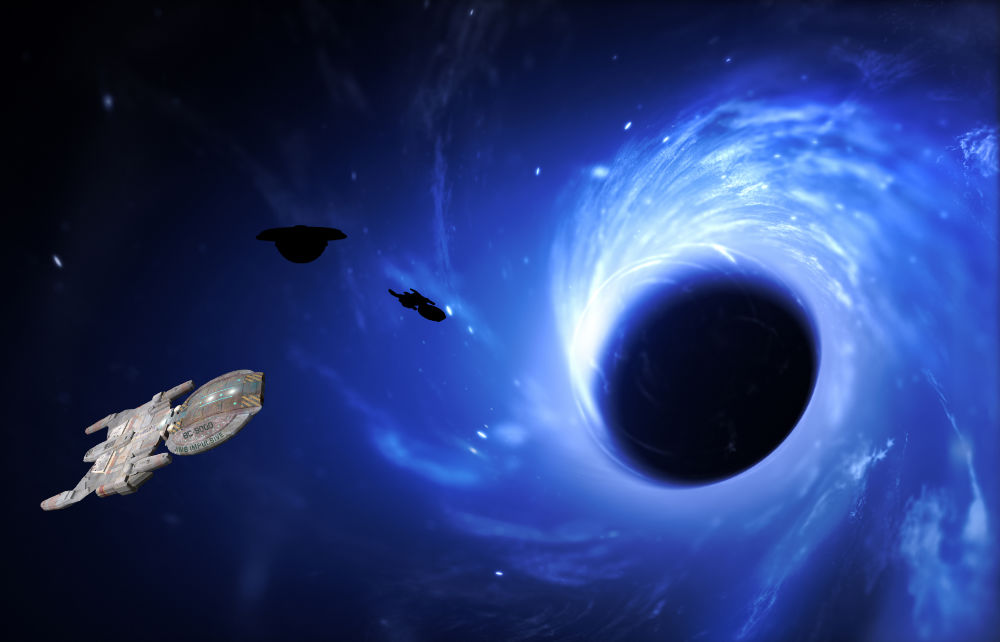 Captain Tiberius paused at the entry to the bridge and watched as his command team retook their positions – in particular, the pretty little ensign who had already tripped into him twice. Now that he understood that whatever the device had done was affected by human attraction, he understood why she always seemed to have a little extra pink in her cheeks when she spoke to him, particularly when apologizing for crashing into him. It wasn’t the first time he’d had to handle a crush by a junior officer, and he made a mental note to make sure she got put on an away mission. Odds were, she’d find a love interest to make her forget her puppy love.

That, or she’d be horribly killed in the line of duty.

He suppressed a sigh and concentrated on the crisis at hand. As he strode onto the bridge, he said, “LaFuentes, are we ready?”

“The area’s scanned and I’ve calibrated the phasers. Hold my beer?”

They watched the screen as the phaser blast left the Impulsive and headed to the NO-BRAINR. It looked like a perfect shot until it veered to the left.

LaFuentes took the miss like a pro. “Recalibrating…firing.  Another miss. Trying again. Dammit! Captain, the laws of physics are fluctuating. I get a lock, but the beam misses. Guided torpedo?”

The torpedo described a crooked and winding path, its programming treating every anomaly as an obstacle to be avoided, yet once it got close to its target, it came to a complete stop, smashed flat, then exploded.

LaFuentes swore again. “Are there defenses on that thing?”

On the Inconceivable, the captain answered. “Well, sure, but against what we expected to see from an exploding star. That it should use those against a planned attack? That should not have happened.”

Vizzini dashed to the nearest science console. He studied the readings, his brows narrowed with concern, then he broke into a smile. “You’re right! The physics is different, but it is, in fact, a black hole! Amazing!”

“And you’re celebrating?” Much as Jeb liked science, he was not happy to see this experiment suddenly act according to plan. “Vizzini, get out of there.”

Jeb pinched the bridge of his nose. “You’re still stuck?”

At his own helm, Cruz was pushing buttons, but he, too shook his head, adding, “And the tractor beams still aren’t working.”

“So also with us,” the captain of the Rational Plausibility added. “Estimate five minutes before the Inconceivable is irrevocably caught in the gravitational pull of the newly forming black hole – then we’re next.”