On the differences between science and engineering 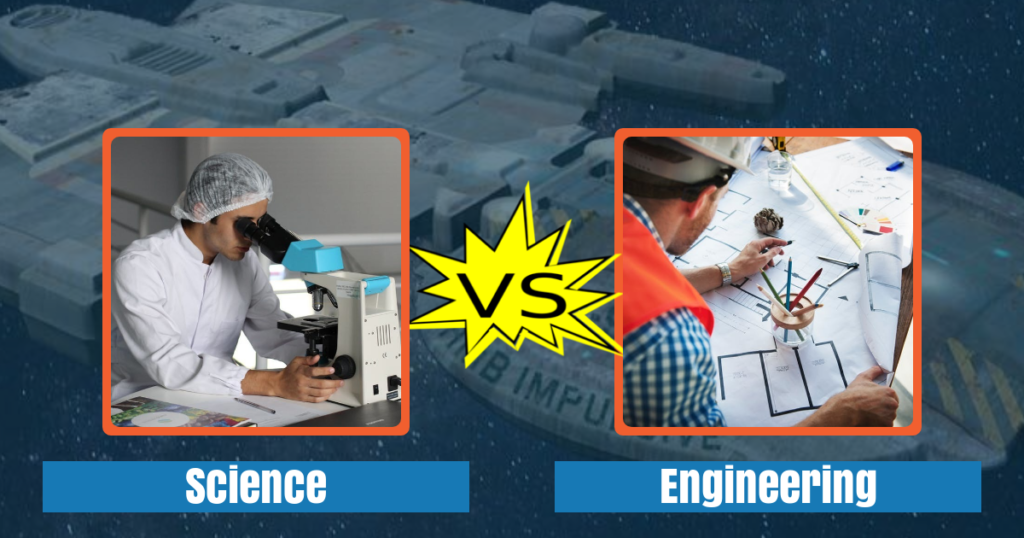 As expected when any two HuFleet ships have a get-together, the party was both raucous and within protocol. The Inconceivable won the coin toss and chose a lively soundtrack of Logic/Human mashups. Jeb was not a fan of Logic music, having had to endure a painful semester at the academy with a roommate who insisted on it for studying, but he had to admit “Standard Variations on Kol’nar’s Theory of Quantum Shearing” actually worked quite well on bagpipes.

One of the security team was discussing the replicator prank with the Logic first officer. Jeb wondered at the large crowd that had gathered. The mystery was solved when the unwary Logic asked if they had discovered the perpetrator, and his officer replied with a completely straight face that no, and they had nothing to go on.

Jeb sauntered past, feigning obliviousness to the Logic’s confusion as the conversation quickly deteriorated into a series of puns and one-liners, and joined another group. This, too, included a discomfited Logic, but at least it was a true discussion about their mission.

The small group centered around the Logic and Captain Vizzini who spoke with animated motions of his hands. He reminded Jeb of his own helm officer, and he decided if the two ever got into a discussion together, they’d have to warn everyone to give them a wide berth for fear of being smacked by an arm waved while emphasizing a point. Vizzni paused in his monologue to introduce Jeb to the Inconceivable officers as well as the Logic, Lieutenant Fle’ek.

“Well of course, we don’t know what’s going to happen,” Captain Vizzini continued after greetings were exchanged. “I mean, if we knew, it wouldn’t be science, now would it?”

“I do not understand. What else would it be?” Fle’ek asked.

“But the experiment itself does not make sense,” Fle’ek persisted. “We did verify the mathematics and the equipment, but it’s the underlying theory that continues to perplex us.”

“Yes,” Fle’ek responded with the patience his people were famous for but without the insufferable arrogance shared by most of his species. “One: The warp cores will fuel thread-level weaving processes, rebuilding the hydrogen layer and transforming the star from Class W to Class G or K. Two: the warp cores will overbalance the energy level, causing the star to collapse into a black hole, potentially taking your ships and ours with it. Three: The resulting explosion will cause a rip in the space-time continuum, dragging us into a mirror universe where we will all have to pose as evil representatives of ourselves in order to steal the technology we need to recreate the experiment and send ourselves back. To be completely honest, I am unsure how one came up with such a speculation in that level of detail.”

“Well, you know how theories are,” Vizzini bluffed. Members of HuFleet were well aware of the mirror universe but were strictly prohibited from telling any other species about it. Not only was it potentially dangerous for other species to know how the evil human empire had enslaved all the other sentient races in its known universe, their fashion sense was just embarrassing.

Fle’ek replied, “Apparently when it comes to the human use of the term ‘theory,’ I do not.”

“Well, you’re on the right mission to learn, then.”

Will Fle’ek learn the mysterious ways of human – or at least HuFleet – science? Will he notice Ellie’s attentions? Come back next week as we discuss the success of failures.