Need to catch up? Find episodes and installments here. Otherwise, as a refresher: The replicator practical joker is still at large, and the Impulsive is at the Pack Nebular, where it will join the Inconceivable and the Rational Plausibility in an experiment in stellar manipulation. 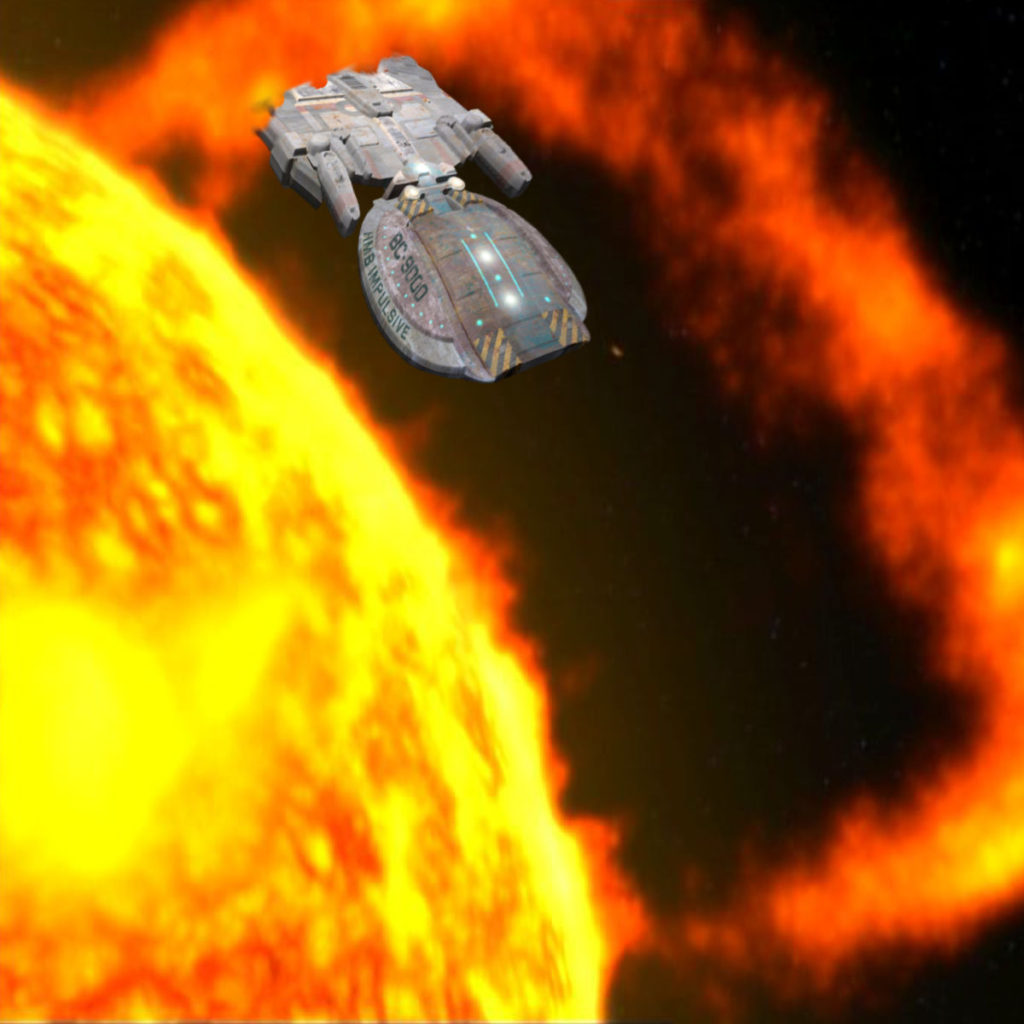 The Pack Nebula, of course, was not nearly as pretty as the viewscreens showed, at least not to human eyes. Wolf-Rayet stars burn blue and are best known for their lack of hydrogen, which astronomers believe was blown away by stellar winds. Thus, their hot helium cores are exposed, but since they are aging supergiants, they’re not embarrassed by it.

Normally, a nebula features one supergiant star, but in this case, there were fourteen Wolf-Rayet stars; hence, the name “Pack Nebula.” The astronomer in the author’s mind who so-named the nebula was exceedingly pleased with himself for this moniker and went further by naming the stars “Alpha Male,” “Alpha Female,” “Beta Male,” etc. His one regret was that normally, after Alpha, Beta and Omega, people didn’t get the reference.

Nestled in the far corner of the nebula, the HMB Inconceivable and the Logic science ship, Rational Plausibility, orbited Gamma Female. “Nestled” may seem a relative term, given the comparative size of the ships vs the incredibly huge distances between stars, and yet depending on the speed in which you traverse the distance, things are a lot closer than you think. Especially when your helmsman is a hotshot pilot who was raised by a feisty Italian grandma who at 110 was the oldest person ever to win the Solar 500. As the Impulsive threaded a solar flare, more than one officer in the bullpen wished the Captain had chosen the “scenic route.”

“Hey, flyboy!” the computer of the Impulsive barked. “I just had a full-body buffing. Don’t singe my hull.”

Captain Tiberius exchanged glances with his first officer. They’d been told that the Impulsive had been upgraded with enhanced initiative subroutines, but they hadn’t realized all the implications.

From Ops, Ensign Ellie Doall said, “We’re in communications range of the Inconceivable.”

Glad for the distraction, Jeb ordered her to hail them. The replay of the close call was switched for the bridge of the Inconceivable, where Commander Deary, Chief Engineer of the Impulsive, stood next to Captain Cary Vizzini. Vizzini was a small man with a round face, a high voice and an air about him that, even though the translight transmission, projected, “I love my job.” Deary, tall thin and black, was a stark contrast, especially since he was scowling.

“Oi, Cruz. I just had that ship buffed.”

Jeb stood and stepped forward. He didn’t need to, of course, but the cameras would take the cue and close on him, forestalling any further arguing between his officers. “Glad to be here, Captain. How’re the preparations?”

“Thanks to the assistance of your very skilled and creative chief engineer, we are on schedule and ready to go. The Logics team is double-checking our equipment and math.”

“Our science team has looked your calculations over as well,” Jeb said. “They didn’t understand all of it, but they’re very excited.”

“They did find where we forgot to carry the one, which resulted in an increased chance of punching a hole into a mirror universe where we’ll encounter our evil doppelgangers,” Vizzini said, wagging a finger at him and grinning.

“Which is why they’re excited.”

“Us, too! So, would you like to come aboard and see our work?”

“I’m sure some of my science and engineering teams would like to – and Ensign Doall – but I was a history major.”

“What if I said our ship was in imminent danger and you needed to come aboard with your senior staff?” Vizzini wheedled, and both captains laughed.

“Then Ensign Doall would have to stay behind in command of the ship. That’s hardly fair. How about after the tour, you bring your science team and your senior officers to the Impulsive for a little pre-experiment celebration? Might not get a chance if we create a black hole, after all.”

On that lame, yet popular, pun, they made arrangements and Doall left to join the science team in the transporter room.

When the door closed, Jeb said, “Well, we have some time to kill. Enigo, Loreli, since I am a history major, I’d like to hear more about what you’ve learned about the Paleos. Join me in my ready room?”

The couple kept professional demeanors as they followed the captain, but inside, their hearts were light. They knew the update was an excuse. Captain was going to interview them for their three-month secret romance renewal.