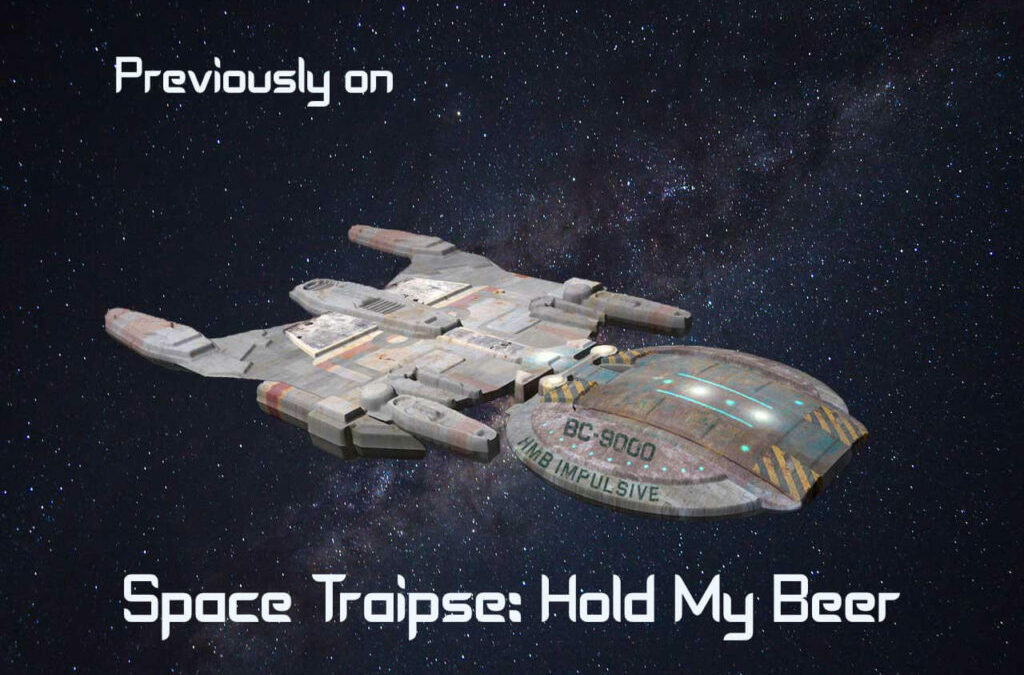 For those needing to catch up, start with part 1 here. For everyone else, here’s the “Previously, on Space Traipse: Hold My Beer.” 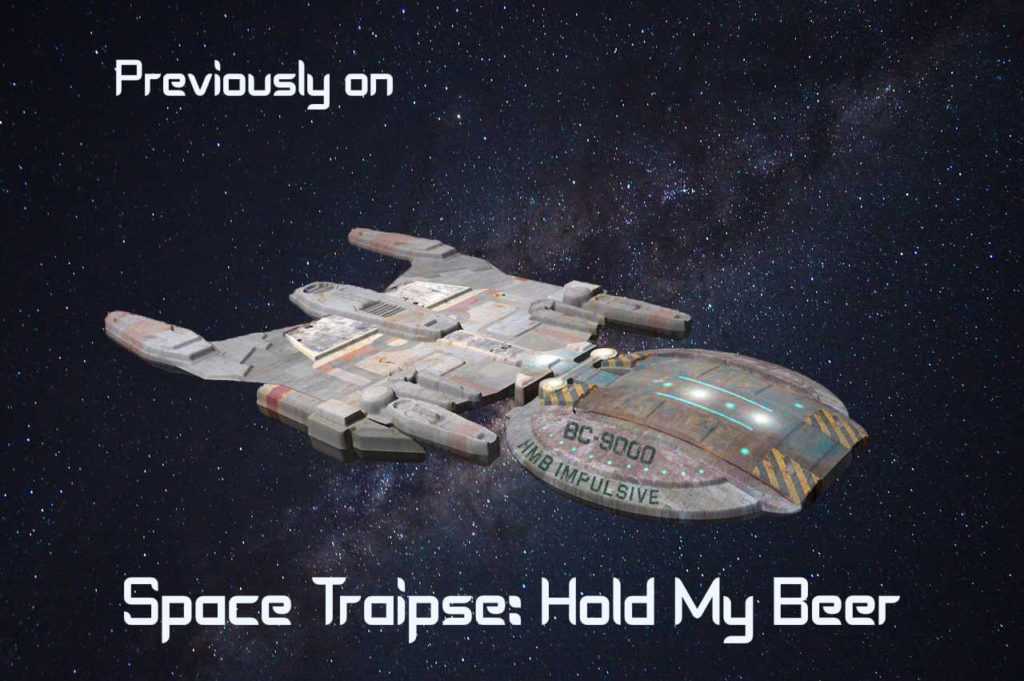 Captain’s Log: The Union is in chaos as replicators everywhere malfunction, and Filedise, the planet from where all replicator files come, has isolated itself to prevent further contagion.

Jeb briefs the bridge crew: “We are assuming that the virus may have affected more than the replicators. As of now, we are on communications silence. Lieutenant Cruz, I’ll need you to plot a path that takes us to Filedise space without encountering any ships, stations or planetary systems, inhabited or otherwise. Once we’re at the planet, we’ll need a plan. Doctor, work with LaFuentes, Doall and Loreli. I understand Filedise’s desire for privacy, but their survival could depend on us having all the information we can.”

Loreli toyed with a frond that passed for her hair. The tips were still pink. “Relationship Regulations 2-heart-shockface-smiley-point-a requires the big reveal be preceded by getting caught in a compromising situation resulting in rumors. Were we compromising enough?”

Wearing a grin that was both gentle and sly, Enigo pulled her into his arms. “Non te preocupara. All Ellie’s got to do is mention it to one of my security team, and they’ll put it together.”

The doctor said, “The planet’s on ECSOPs – Emergency Customer Success Optimization Protocols. They’re no fun. Everybody’s on lockdown – you work or go straight home. Everything gets audited – no file unchecked, no process unexamined…”

Ellie tries to break into the shuttle through the toilet. Suddenly, the fighting ends, and a man sticks his head under the shuttle. He has on an aluminum foil cap.

“You’re from HuFleet, right? Trying to stop whatever madness is coming from Filedise? We’re doing the same. We need your help as much as you need ours.”

The author decides a “previously on” collage of scenes recap works much better on TV.

The Filedisian gripped Ellie’s hand and pulled her out, then helped her to stand. He repeated the gesture with Loreli, though taking noticeably longer to release her and grinning widely the whole time. Ellie ignored him. It was a typical reaction for a heteromale who had not seen a ship’s sexy before. As the doctor and Enigo crawled out from under the ship, she surveyed their surroundings.

The grass around them was singed and smoking from where they stood to the wall and beyond. Tops of trees blazed openly. People littered the grounds, many of which also had their heads swathed in foil. The group of armed men and women were running toward the building in reasonably disciplined military fashion. The sunlight glimmered off their foil-wrapped heads, too.

Of course, what took you a minute to read only took her about seconds to take in. In that time, the Filedisian shook off his momentary distraction at Loreli’s charms and jerked his head at the damaged headquarters building. “Look, the KatHack will have more forces here any minute. We have to take over this building to have any chance of succeeding.”

“At what?” Doall asked, though she really wanted to know what was with the odd headgear.

Someone from behind them yelled, “Over there – the treeline!”

A Filedeisan security ship flew toward them, phasers blasting and the caption, “Customer Success is Job One” scrolling across its windshield.

With a snarl of frustration, Enigo smacked the side of the shuttle. The Kenival obliged by opening the compartment hatch, revealing a large phaser cannon. He snapped his phaser to his pants and grabbed the cannon. He fired at the incoming craft.

He hit it straight in the I.

People around them cheered, until they saw the craft veer straight toward the shuttle.

No one needed to say, “Run!” though of course, everyone did even though fear had already sent the command to their feet. They were halfway up the ramp to the headquarters when the ship crashed into the Kenival. The impact shook the ground, knocking them off their feet, as debris flew over their heads. Ellie covered her head with her arms, wincing in anticipation of torn metal piercing her skin, but instead, they were only showered with dirt and sod.

“What?” She glanced back to see the ships basically intact, and the dirt sliding off the enemy ship’s still-active shields before the power died.

They stood, and ignoring the dirt, hurried into the building, Enigo providing cover with the phaser canon.

Once inside, the Filedisian asked, “How did you know where to hit that ship?”

Enigo replied as he shouldered the cannon and grabbed his hand phaser. “The shields were thinner so they didn’t distort the words. Standard mistake by security forces on peaceable worlds.” He resisted the urge to spit. He didn’t have much respect for any world that valued image over defense, but Loreli was beside him, motivating him to better manners. “But when this is over, you owe us a new shuttle, comprende? Now, what exactly is this mission? We gonna take out this fracking virus?”

This was another firefight I wasn’t expecting. I think Enigo really wanted the phaser cannon. (Incidentally, I wrote this before I saw Men in Black: International.) I did not expect the Kenival to get splatted, though. I wish I could do animation. It’s so very funny in my head, the poor shuttle scrunched in the middle, the Filedisian ship sticking out of it, a dome sparkling as clods of dirt get zapped…