and Other Tales of the Undead 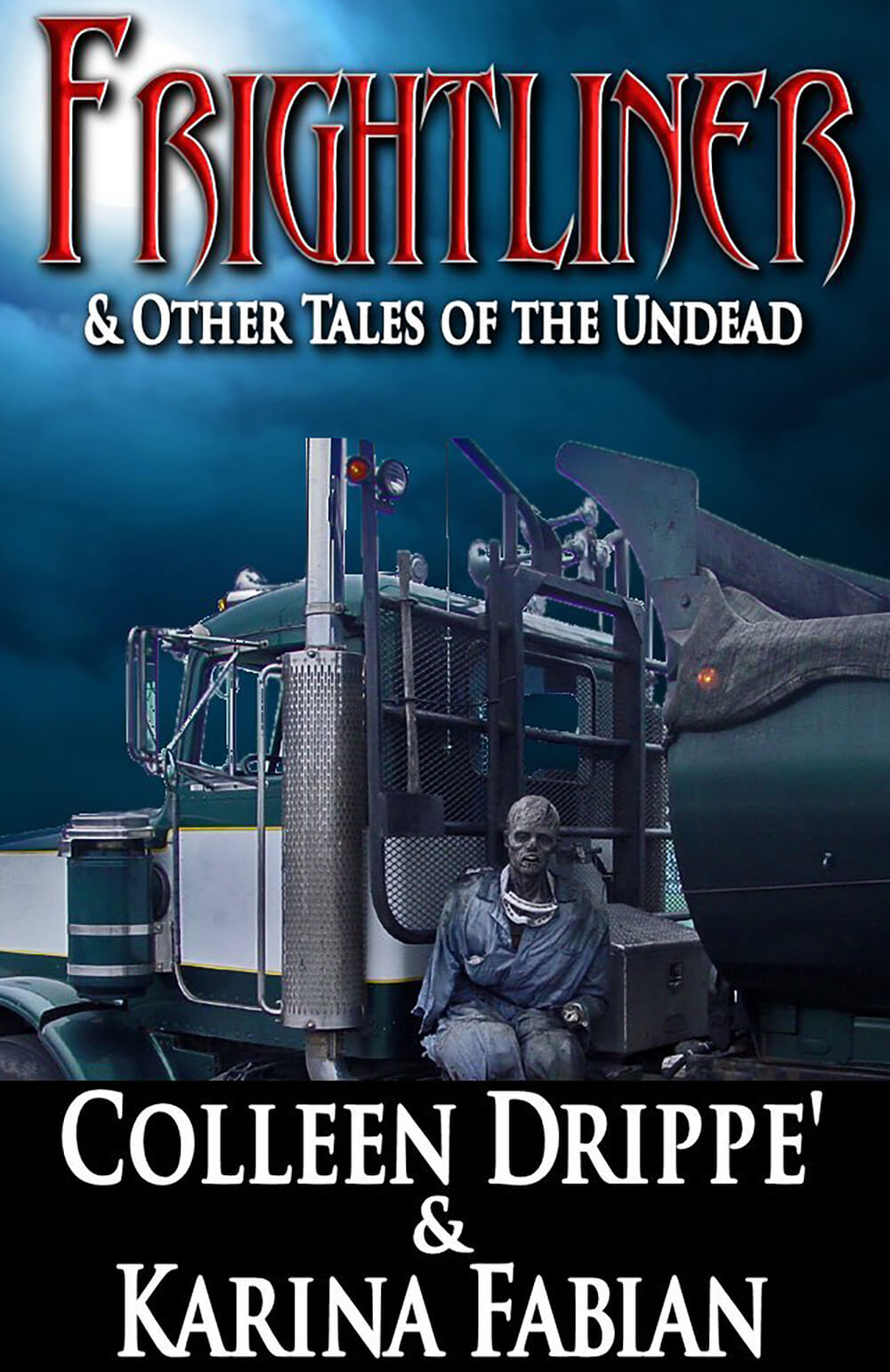 When Jay Carlson has a run in with a strange, dark truck on a lonely road, his life goes south. He sees things that others don’t see. He learns things he wishes he could forget, and he is drawn into an ancient battle he wouldn’t have believed in even a day in the past. This time, even country music and the open road can’t save him. In Frightliner & Other Tales of the Undead, join authors Colleen Drippe and Karina Fabian as they take you to the darkest places on the road. Also includes two extra stories and an excerpt from the novel Neeta Lyffe, Zombie Exterminator by Karina Fabian.

Jay Carlson’s head bobbed back and forth and he tapped the wheel of his 1997 Kenworth W900L as he cruised south on NM Highway 285. He was singing to some upbeat country song he didn’t really know the words to, just making them up as he went along. Nothing was going to break his mood. He’d been lucky this run–light traffic, no holdups–so he’d treated himself to a detour to Roswell, staying overnight there and checking out the museum before heading on his way. He was glad he did. The gift shop had been almost as much fun as the museum, he thought, as he grinned at the acrobatic alien perched on his dashboard, swaying with the bumps in the road.

Suddenly, a loud blaring, like a tortured water buffalo, followed by a whoosh! that shook even his fully loaded rig, jarred him out of his happy daydream. “Jerk!” he yelled at the taillights of the aged 18-wheeler that had just passed him. “What’s your hurry?”

For a moment, he considered increasing his own speed; any Smokeys in the area would no doubt get old leadfoot first, giving him time to slow to legal speed, but he decided against it. Sometimes, troopers here worked in pairs, and the chance of a delay and a ticket wasn’t worth the time he might save. Besides, he wasn’t sure he wanted to catch up with the truck. For some reason, the thought of seeing it again made him shudder.

He didn’t have much time to dwell on it. Here came more trouble–maybe a mile ahead, emergency vehicles were parked along the shoulder, their lights flashing. Traffic on both sides was stopped as a tow truck backed up to an old Honda. Jay slowed to a stop, taking the opportunity to check things out without rubbernecking as a couple of guys in faded jeans attached chains to the Honda’s front axle. The ambulance had its lights off, and as he watched, the attendants lifted a gurney up onto the street behind the ambulance’s open doors. A woman lay on it. He could tell it by her ample figure, but her face was covered by the sheet. Jay shook his head sadly. Funny, though. The Honda looked shabby, but not battered.

A knock on his driver’s side door interrupted his thoughts, and he opened it. “Hey, Dale,” he greeted his friend. “Long time no see. What’s going on here?”

Officer Dale Keun smiled slightly in greeting, but his eyes looked tired and the smile faded quickly. “Murder.” He didn’t seem to want to say any more, so Jay changed the subject.

“Wow. Uh, say, did you happen to catch that hunk of junk that flew by earlier?”

“What hunk of junk?”

“Oh, come on. He flew by me–must have been doing 90. It was–“ He stopped as he realized that he couldn’t even remember the color of the truck. “It was just a couple of miles back,” he finished lamely.

“I must have missed him. I was, um.” He grimaced and looked away, but Jay didn’t need him to explain. Dale was still looking a little green.

“Worse. I won’t be sleeping well for a while. Listen, there’s a real sicko out there, and it’s possible he’s targeting people alone on the road. You pull in for the night, you find a nice crowded truck stop, or better yet, spring for a hotel, got it?”

Jay’s thoughts flashed back to that creepy truck. “Hey, I’m always careful. I’ve got no illusions of being a tough guy.”