The truth is out there. The Truth is in you. 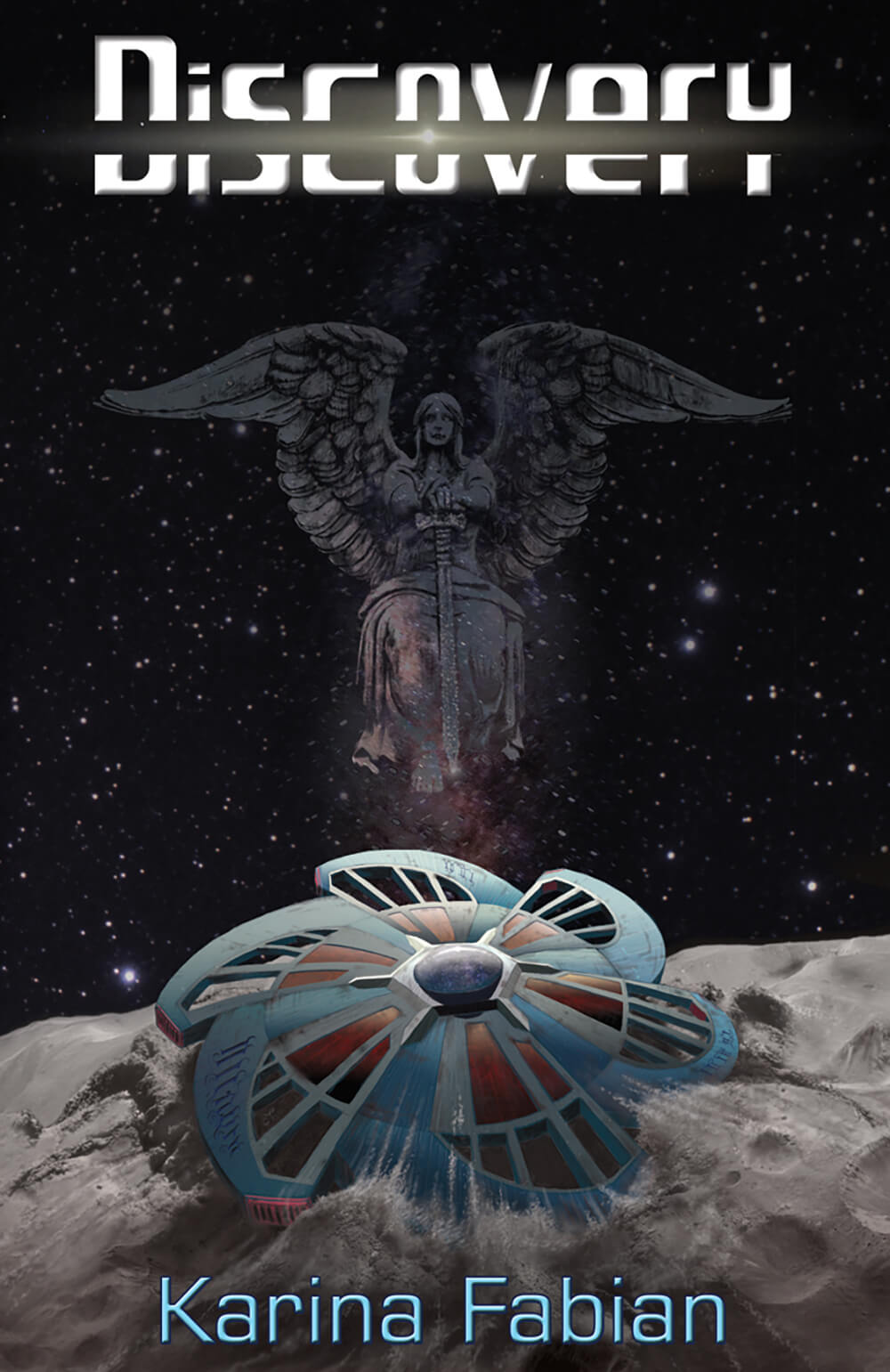 Sisters Ann, Tommie and Rita are part of a classified mission to explore an alien ship that has crash landed on an asteroid three billion miles from earth. Humanity’s first contact with beings from beyond the solar system is bound to unlock the mystery of life in the universe… but the crew have their own secrets; hidden fears, desires, horrible sins – and a mission to kill. Researchers discover something unique about the third arm of the ship: something wonderful, terrifying and…holy. This discovery challenges Rita and Ann to confront their own pasts in order to secure the safety of the mission and the very souls of the crew.

Rescue sisters?  Zero gravity quasi-humans? Dataheads and Rockhoppers? Karina Fabian’s Discovery is a suspenseful space adventure with deep roots that extend to questions about life, death, faith, and purpose. On this one of a kind mission to the outer fringes of the Solar System, characters discover more than secrets of the universe, they hold mirrors to who they are and what they believe. The crew members of the Edwina Taggert have radically different motives for embarking on a mission to explore what they believe to be an alien vessel. With the dexterity of an Isaac Asimov or Larry Niven, Fabian makes the science and speculative science of the story accessible, deftly weaving it into the fabric of the story.  Who is who they claim to be, pretend to be, profess to be? What the crew of Discovery finds when they arrive at their destination challenges their beliefs, aspirations, and schemes, and keeps the reader wondering to the last page.

Author, Toward the Gleam, Terrapin, Iota

There was just so much I enjoyed. I just love the concept of an order of Religious sisters dedicated to rescuing people involved in accidents in space (Our Lady of the Rescue). (Discovery has) an interesting premise, but what I think I loved most was the characters in the story. There is lots of tension involving competing groups and individuals with their own ideas on what first contact might bring. A clash of worldviews. There is some depth to the characters in the story. Various levels of brokenness among the crew and the sisters….Villians in the plot are not two-dimensional characters just to provide tension and to move the plot. They have a realism to their motives and for the Rescue Sisters there is more than just physical rescuing…As a SF novel I thought the story was quite good on its own merit. How character-driven this novel was enhanced the story. Discovery is a more serious SF novel, but her wit does poke through from time to time. I would certainly like to read more of the Rescue Sisters.

It’s hard to find good Catholic fiction nowadays, and Catholic science fiction is an even rarer breed. Enter Karina Fabian’s new space thriller Discovery, about an order of nuns devoted to space rescue and their mission to help recover an alien spaceship stranded in an asteroid belt at the edge of our solar system. Discovery is, quite simply, stellar (pun intended). Author Karina Fabian’s world-building is first-class. There’s enough hard science in Discovery to satisfy the geekiest astrophysics major…Discovery delves into all the best and most exciting themes of the science fiction greats. Although the book contains elements of romance, action-adventure, and even horror, it never shies away from the essential existential questions. Highly recommended.

Author and Blogger, The Four Keys to Everlasting Love

Augustus laughed and put a friendly arm around James’ shoulder, leading him down to the ship’s offices. He said nothing more until they got to the conference room. He held the door open for James, and when they had stepped through, announced, “Gentlemen, I’d like you to meet Dr. James Smith. He thinks I want him to find Atlantis.”

Two men sat at the table. The younger dressed in jeans and a gray collared shirt with the Luna Technological University logo over the pocket; his mousy brown hair and pale brown eyes combined with a tense, nervous posture reminded James of many worried grad students he had known. The older, a fifty-something man dressed in a similar shirt but with tweed pants, nodded James’ way. His relaxed full-throated chuckle was for Cole’s benefit.

Augustus continued, “James, this is Dr. William Thoren, Dean of Astrophysics at LunaTech, and this is Chris Davidson.” “My protégé,” Thoren added when Augustus paused.

The entrepreneur’s eyes flicked in annoyance. He hated having his dramatic moments spoiled. Nonetheless, he continued on as if the dean had not spoken. “Chris has been working on a rather uninspiring project for his doctorate that has had a surprising result. But wait!”

With that impish grin, he reached into his pockets and pulled out four small devices, which he set at four points of the room. When he pressed the remote in his hand, they heard a brief hum, then a shimmery fog formed a dome over them. No one outside the dome would be able to hear them and would only see vague shapes.

Scientists from the moon? Security fields? Well, if Augustus wants my attention, he’s got it. James took a seat at the table, and cocked a brow at Augustus. “So you’ve found the Lost City of Atlantis in space?”

Chris gave a brief glance at his supervisor, and Thoren nodded in a benign, “carry on.” He pulled out a handheld computer, set it on the small table, and pressed some buttons. A holographic map of the solar system from the Sun to the asteroid belt appeared, beautifully detailed and large enough that James had to sit back a bit.

“Sir, are you familiar with the Kuiper Belt?” Chris asked.

James shrugged. What’s going on? “Ky-per Belt? That’s not like the asteroid belt?”

“This is the asteroid belt.” Chris set his finger on the thin line of rocks just past Mars’ orbit. He slowly pulled his finger toward himself. As he did, planets rushed past James’ field of vision: Jupiter, Saturn, Uranus, Neptune, Pluto. A moment of black space, then the image stopped at a smattering of dots of various sizes.

“This is the Kuiper Belt. K-U-I-P-E-R, even though it’s pronounced ‘Kyper.’ It’s really just the rubble left over from the formation of the solar system. Most of it isn’t even rock, but ice. Comets come from here. We don’t hear much about it because the distances even from the Outer Planets mean it’s not really cost effective to live or work there. And since the commercialization of space, most people don’t even care…”

“Excuse me, Chris, but why am I getting an astronomy lesson?”

The entrepreneur grinned. “Give him a minute.” He jerked his head encouragingly at the grad student, who gave him a shy smile in return.

From the corner of his eye, James saw Thoren glower; then, the expression was smoothed away.

Chris didn’t notice. “Okay, the last time anyone has bothered to explore the Kuiper Belt was with the Seeker Probe of 2215. The American President, Linda Montero-Fadil, pretty much pushed it through on personality and stubbornness, but they called it Fadil’s Folly…” Thoren cleared his throat.

“Anyway!” Chris started, then floundered a moment, his train of thought derailed. He took a breath, touched an area of the map with two fingers and pulled it apart, expanding that area. He did it again and again, then rotated it and circled an object with a dark center. The rest of the map fell away.

“This is 2217RB86. Seeker did a flyby of it and its neighboring objects. That’s what you call, um, objects in the Kuiper Belt. Or Ky-boes. That’s what we call them at the university. So, this Ky-bo caught my attention because it’s got some very unusual readings, especially around this dark dot… I won’t bore you with the details. The point is, Dr. Thoren was able to get us some time on Old COOT — that’s a telescope on L5 Station – and um…” He stopped to glance around, as if making sure the security field was still in place. Then he pressed another button and pulled up a different, sharper image of the Ky-bo.

“Oh, my.” James leaned forward, his nose only inches from the image. The dark circle had resolved into six crescent arms jutting from a sphere. One arm was partially dug into the rock.