Review of The Haunted Cathedral by Antony Barone Kolenc

Tony is a good friend and a great writer of middle-grade books. He was kind enough to let me review his latest, The Haunted Cathedral. I enjoyed it greatly. Read on for a review. 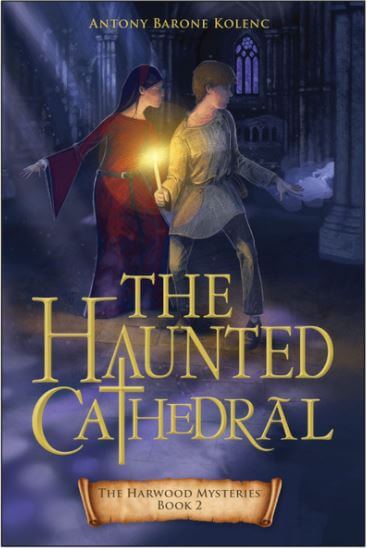 An ill-fated journey, a long-lost uncle, and a mysterious cathedral mark the next chapter in the life of Xan, an orphan in search of his destiny. For a year, he has lived in the care of Benedictine monks at Harwood Abbey. Now he learns that he has an uncle, said to live in the far-off city of Lincoln.

Will Xan survive the trip alongside the prisoner Carlo and his cruel guards?

Will he find Uncle William?

And why is Xan drawn to the spirit that haunts Lincoln Cathedral—could a ghost reconnect Xan with his dead parents?

Too often, the second book is not as good as the first. Tony breaks that with a second story that is even better. He takes his already rich world and likeable characters and crafts a great adventure. Catholics and history buffs will appreciate the realistic portrayals of feudal and monastic life. I liked that Tony did not glass over the realities of that era but let his characters live in them as anyone of that time would.

It’s great fun on many levels. BOY deals with problems that would challenge adults and ordeals of any growing boy – from bullies to girls. He makes new friends while reuniting with his best friend, Lucy. The mystery of the haunted cathedral rivals the Hardy Boys and Three Investigators novels I used to read my boys. Definitely recommended!

← Previous: Book Tour and Review: Shadow in the Dark by Antony Kolenc Next: Deadly Decorum by Jacqueline Vick →