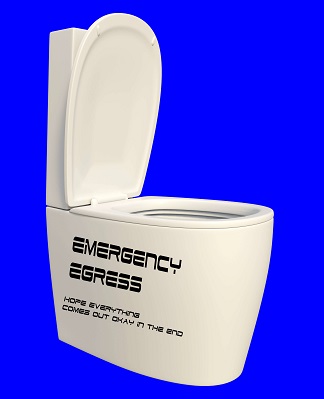 In the shuttle bay, the away team was preparing for its mission. Since they were not on the guest list, Enigo, Loreli and Doall were depending on some fancy technology to crash the party. The strapped on their utility belts and checked the equipment. One by one, they turned on their cloaking devices while an engineering minion pointed sensor equipment at them.

“Good to go; just stay quiet and don’t move around until you’re ready to jump,” she said.

They nodded; Loreli, with more trepidation than her human companions. Botanicals had an inherent fear of plummeting from great heights. No one was quite sure why. Nervously, she touched the bubble pack that would cushion her fall and reminded herself she was not in a pot on a shelf.

The engineering minion handed them back their comm badges. “We enhanced the signal so you’ll be able to reach the ship. Dour’s still trying to find a way to use them to cut through the teleporter scrambling signal. Your best bet is to all return via shuttle. Besides, I think we’d rather have the shuttle back, too.”

Ellie snickered at what she thought was a joke, but the master-minion-in-chief did not smile. Ellie cleared her throat. “Got it.”

“Good luck.” With a nod, she left. Guy took his place in the front where he could be seen, alone, through the viewscreen, while the others crowded into the head.

Once the doors shut, Guy pressed the communications panel. “Bridge, Filedise Control, this is Doctor Pasteur in the Impulsive shuttle, Kenival. Ready to launch.”

“Thank you,” the same femalish voice they’d heard before replied. “Once you have cleared the Impulsive, we will take navigational control and guide you to the landing zone.”

Three adults were two too many to fit in the tiny shuttle bathroom. Ellie stood straddling the toilet, crouched with her shoulders against the ceiling, trying not to stare down at Loreli’s cleavage or Enigo’s biceps or notice how comfortable the two seemed pressed together or think about how they were leaving the shuttle. She blew out a large breath of air from between clenched teeth.

“’Smatter, Doall? Didn’t go before we left?” Enigo teased in a whisper. When she couldn’t think of a witty reply, he got serious. “You can reach the flush button, right? Okay, when the doc gives the signal, we have maybe a minute, and we’ll be close to the ground. Jump and inflate your bubble. Don’t wait. Don’t freeze.”

“I’m not sure this was one of my better ideas,” she said.

“You kidding? It’s brilliant and hilarious – one to tell the grandkids.”

There was a knock and someone jiggled the lock.

Training took over. Ellie smacked the Flush button. The bowl of the modified toilet slid away, along with the shielding over that part of the shuttle. Ellie tucked in her elbows, gave a little hop and brought her legs stiffly together.

I should never have read Harry Potter, she thought as she dropped through the toilet and out the shuttle.

I don’t care how comfortable I got with magic. I do not see myself stepping into a toilet bowl in order to enter some magical headquarters.