issed an episode? Follow this link to catch up.

I’m not an artist. I lack the skill and the training. Sometimes, it takes me longer to find or make an image than it does to write an installment. This is one of those days, so here’s a Star Trek alien. Chi Nikki Chawa would have the same chiseled, heroic features, but lots more tatts. 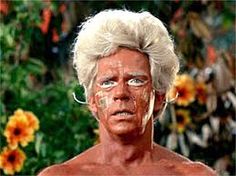 Lieutenant LaFuentes and his two security minions took position at the top of the hill – which is to say, they were scattered in strategic positions and crouched behind rocks just in case the approaching contingent of Lone Star members and aliens decided to start shooting. They watched as the other strode toward them along the saddle between hills. A couple of drones had preceded the contingent and overflown the camp. Since the drones weren’t armed, LaFuentes had let them pass.

When they got within shouting distance, LaFuentes called out. “That’s far enough! Throw down your weapons and state your business.”

“This is our planet!” a human with an accent to rival Captain Tiberius’s hollered back. “Who the hell are you to tell us what to do?”

“We’re the peacekeeping force from… Earth,” LaFuentes shouted back. He’d actually never been to humankind’s planet of origin, himself, but if these guys didn’t know about the Union, it was safer to give them something familiar to identify with.

However, the speaker latched onto a different detail. “’Peacekeeping’? You’ve gone and imprisoned my people.”

“The other side, too. Been pretty peaceful ever since. We’re tending your wounded, too. You’re welcome. I’m Lieutenant LaFuentes of the HMB Impulsive. Who are you?”

“I’m James Ray Seip, leader of Alamo. Beside me is Chi Nikki Chawa; he’s the elected leader of the Evolved Paleos.”

“That some kind of gang?” LaFuentes wished Loreli were there. She’d love this. He renewed his vows to bring some of them up conscious.

“No. I can explain everything, Lieutenant. My brother, Bobby, is trying to sabotage our only way home and is stopping the advancement of the indigenous peoples. I’m sure we can straighten all this out. Come down here and let’s talk.”

“We can hear each other just fine. But if you want to come closer, law down your weapons and put your hands in the air.”

Chi Nikki Chawa stepped toward them – but just one stride. Whether he was trying to upstage Seip or protect him, LaFuentes wasn’t sure but since he stopped at the single step, he held his fire.

Chi Nikki Chawa said in perfect English: “What kind of honorless coward are you, that you hide behind rocks and aim weapons at while we talk peace?”

LaFuentes laughed, loud, and he thought he’d heard his team chuckle, too. They both knew better than to fall for that bait; they’d seen his scars. “Man, the first and last time I fell for that line I was fourteen. I got no reason to trust you.”

“And what reason do we have to trust you?” Chawa retorted.

“We’ve held 200 of your people captive for over two hours, and so far all we’ve done is keep them quiet, given them a catch-up history lesson and fixed their injuries.”

For a wonder, Chawa seemed satisfied with the answer. He tossed down the primitive spear he’d been holding and followed it up with his pistol. James watched, then shrugged and tossed down his guns as well. Only the two of them, however. The rest took out their weapons and trained them toward the Impulsive team.

LaFuentes found that sensible and respectable. “Gracias, man. Okay, listen. Our captain wants to talk to you, so I’m going to toss you down a device.”

“Yeah, but it’s also a location beacon. We’re gonna teleport you to our ship. Your brother and some chica are already there.”

“She didn’t say her name. She just jumped in the captain’s arms as he was teleporting to the ship.”

“Ellie Sue,” the man concluded, and he didn’t sound too happy about it. LaFuentes sent a quiet warning to Gel to prepare for a potential domestic, then tossed down the extra communicator he’d brought. Chawa picked it up and looked it over curiously.

“Hold still. It may tickle. Dour, three to port up.”

As of the day, I’m loading this, I’m still searching for a wonderful full-time job. In the meantime, I’ve written three stories for Superversive’s Planetary anthologies – one by invitation, the other two on spec – and had a DragonEye story accepted for the Superversive Press anthology To Be Men. So, some forward progress, but much left to accomplish. The newsletter is still on hold, but be sure to sign up for the RSS feed for reminders about the next installment.