One day, I’ll learn how to do human models. I know there is software out there, but I’ve just not had the time. For now, here’s an image of Ellie Sue, our current femme fatal, in her glamor shot while competing for Miss Lone Star. I figure this is more than a beauty contest; the winner gets promoted to hospitality officer. They don’t have a ship’s sexy, like HuFleet, and this would be a gender-inclusive contest. Hot, extroverted guys can compete, too! 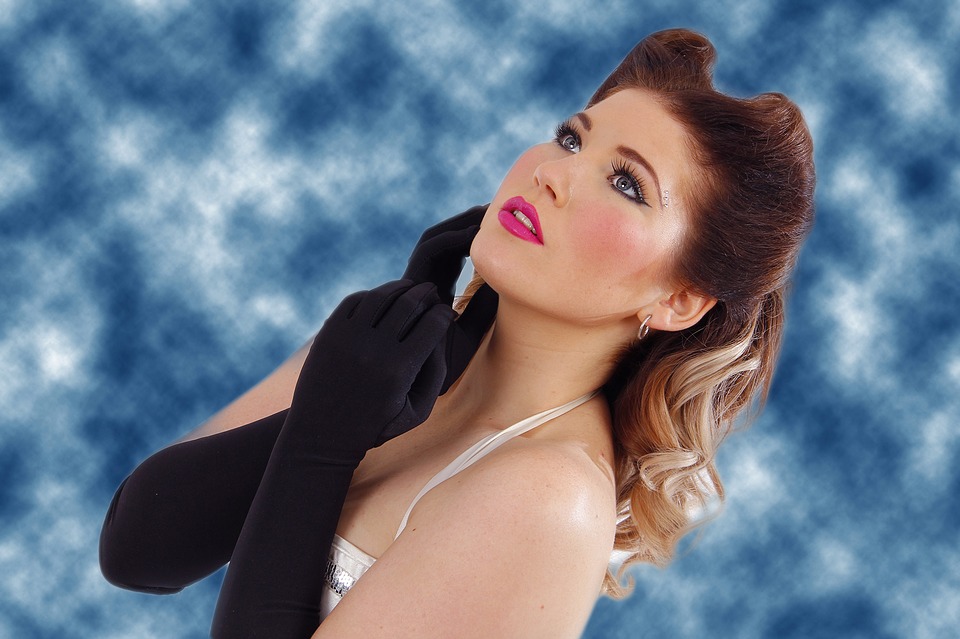 Captain Tiberius often led tours of the ship, but seldom did he have his visitor cling so tightly to him while trying to look around. He couldn’t say he minded, completely, though he wished the woman in question was not an in-law, no matter how far removed. It made thoughts of romance uncomfortable.

Most crewmen greeted them with studious ignorance, as if some kind of HuFleet training kept them from seeing how she arched her back so her bosom pressed against his arm. If he’d had that training, he could use a refresher, he decided. It was a relief when Minion Torez from Engineering greeted him by slapping his own butt.

“Fruliogri Kra, Torez,” he replied and slapped his own derriere. As they passed each other, they reached out to squeeze the other’s cheek. It was the right, not the left, but Ellie Sue was clinging to his left side. He was sure Keptar would understand.

“My goodness! What in the universe was that about?” she asked.

“Standard Keptarian blessing,” Jeb explained. “I and some of the crew converted to the religion after rescuing an alien vessel. “Keptar is the great force that spewed out the gasses of the universe that coalesced to become the stars and planets we roam today. Even we are the result of his great expulsion.”

“Fascinating! And the, well, butt-smacking?”

He grinned. He did so love this part. “The exact theology is complex. I’m still learning the intricacies. Think of it as part blessing, part witness, part call to action.”

He stopped in front of a viewport that showed an extrapolated panorama of the stars opposite the planet, and disengaged himself from her grasp to demonstrate. He smacked his own behind. “Keptar’s buttocks are the seat of life, get it? So we are called to keep our own seats firm, yet supple, as a reminder to keep our hearts and minds the same. As our behinds go, so shall our lives. So, when Kreptarians greet each other, we slap to show resolve and grab to support and to remind the other to stay worthy.”

Ellie Sue gave a small gasp. “That is so deep! But aren’t all worthy?”

“On this ship? No doubt. But everyone has the potential, even if it’s not fulfilled. Prayers are a workout, I can assure you.”

She giggled, then rubbed her own posterior thoughtfully. “Do you think…I’d be worthy?”

In the name of Keptar, he took hold of her left buttock in the ritual five-finger spread for evaluating a potential acolyte. He smiled reassuringly. “I don’t think you have anything to worry about.”

Then he offered her his arm and they started back along the corridor. “If you’re really interested, when we’re done with this mix-up, I’ll give you some literature. For now, why don’t you tell me what got this whole feud started?”

She pouted. “What always sets brother against brother? Desire for power and general pig-headedness. Bobby can tell you the details – from his side, anyway. Jimmy Ray will have his own story. And the truth will be somewhere between, if there is a truth. I’m afraid I’m not much help to you. I wasn’t involved, you see, with the behind the scenes of the settlement.”

“What did you do on the Lone Star?”

“Oh, I was Chief Hospitality Officer – you know, managing the activities and the upkeep and general morale-building? It’s a difficult job, even more so when the power problems started, and then the fighting… There’s only so much football and cotillions can do. I… Excuse me.”

She stopped and let him go to wrap an arm around herself. The other, she used to press her fist against her mouth. Her eyes started to glisten with tears she blinked back.

Jeb’s heart softened, and like a true Texan, he felt the urge to console her and beat some sense into the idjits who made this pretty filly cry. “Hey, now. It’ll be all right. We’ll talk some sense into both parties. In the meantime, we’re close to the Impulsive’s rec facility. Want to drop in and take a look?”

She wiped the single tear that escaped, then brightened. “I’d love to!”

Frugliori Ka, indeed! Hope Jeb’s evangelizing doesn’t come back to bite him in the butt. No, wait. I do. Makes for a fun story. Speaking of, have you signed up for my regular newsletter? I share news about my stories and sometimes a flash fiction. It’s intermittent, but when I have fun news, I share.