Brief recap: While the GONs want to chop down Loreli, who has rooted herself into the planet, Lt. LaFuentes as come up with a new plan: Use Minion Gel to create a kind of coating around her and then teleport her aboard. Gel is so excited for the next couple of installments. It’s not often a gelatinous-based life form gets to be a hero!

Need to catch up? Read part 7 here. Gets links to all the stories here. 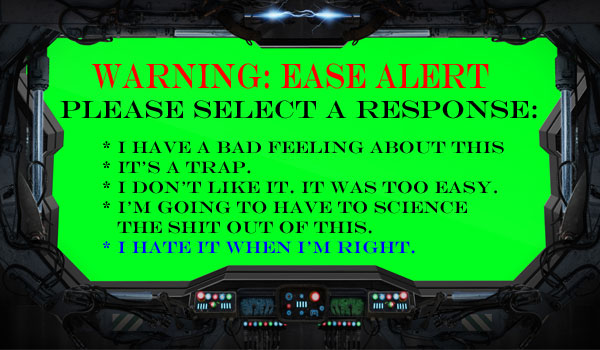 Hottdam if my security officer didn’t come up with an elegant solution to our conundrum. Never underestimate the inspirational power in a good workout.

We performed our little demonstration for the GON botany team, and after some careful measurements and a virtual sampling of Minion O’Tin’s bodily matter, they declared themselves satisfied that our plan will satisfy their requirements for environmental purity while letting us get Loreli out alive. The Impulsive’s own botany team has worked with Doctor Pasteur to create an optimal strengthening fluid for Loreli. Minion O’Tin has absorbed some of this into his own body so that he can share it with Loreli once he has enveloped her root system. He’s also absorbed some quantum trackers so that our teleporter chief can lock onto all of Loreli’s roots for teleportation.

The DipCorps has released the All Stop on my ship, and the GONs have stood down their planetary defenses.

The GONs have even set up a platform where we can beam down and oversee the process without stepping on their soil. Apparently, they are going to have some dignitaries there to talk about how this is a great step forward in Union/Keepout relations. Wylson will speak remotely on behalf of the Union, which is only fair since I did suggest taking an ax to one of said dignitaries.

So, it’s looking like All Systems Go for a nice, easy conclusion. Which is why the ship will be on Yellow Alert, and I’ve authorized Lt. LaFuentes to join us, and we’ll all go armed. I don’t want to say this has been too easy, but…

In the teleportation room, Lieutenant Enigo LaFuentes handed the Captain a weapon. Jeb checked the charge, ignoring his security chief’s frown. He’d authorized only energy weapons; they looked cool and ceremonial when paired with the formal dress uniform, and he didn’t want to chance spilling any blood. This close to the end of the mission, the last thing they needed was to mess things up by contaminating the soil, after all.

The doors slid open and Minion First Class Gel O’Tin oozed, sluglike, in. His normally green skin was more aquamarine due to the nutrient fluid he’d absorbed. Right behind him, the botany team trundled a vat containing the same fluid mixed with potting soil. It smelled vaguely of manure. Jeb felt a touch of homesickness, but all the same, he was glad his Globbal crewman had not absorbed the smell with the substance.

“I am so bloated!” Gel declared to the room at large. “I haven’t felt this full since Union Day.”

“That was a party!” La Fuentes agreed. The annual celebration usually included a great deal of alcohol and sometime well into the festivities, someone had suggested “Gel shooters.” Gel has obligingly absorbed an entire vat of tequila and offered teaspoonfulls of himself to the daring and adventurous. He’s even submitted to being salted so folks could lick him beforehand.

Then LaFuentes laughed. “Whodda thought it would be training for today?”

“Never waste an experience,” Jeb agreed. “Are we ready?”

The chief botanist said, “As soon as you transport away, we’ll set up the vat to receive Loreli.”

Chief Dour said, “Auxiliary teleporters are ready with Plan B.”

“Excellent. Let’s do this.”

Jeb led them to the teleporter platform, but Dour called for them to wait. He fixed LaFuentes with narrowed eyes. “Did you ‘go’?”

“What?” LaFuentes sputtered. “You’re seriously asking me that now?”

“I respect the GONs’ quest to preserve their purity. And your bladder is notorious.”

“Whoa, man! Personal!” Yet a couple of the botany team grimaced in agreement with Dolfrick.

“But he has a point,” the captain put in. “There are going to be several long-winded speeches.”

“I can inspire you, boss,” Gel said. “I’m carrying almost two extra gallons of fluids. I am the perfect balance of biological and technological requirements for this mission.” The Globbal stretched and lifted the bulk of his girth up in a simulation of sticking out his chest.

The three dissolved as Gel was saying he didn’t get paid enough to hold something LaFuentes couldn’t hold himself.

The teleporter chief’s aim was as true as his devotion to his Mistress of Teleportation, and they arrived on solidly on the platform, close enough to Loreli that Gel could stretch himself to her without ever touching the planet itself.

When Jeb saw her, he bit back curses the universal translator would have had to summarize as “expressing deep concern and alarm.” In the past few hours, her situation had gone from serious to critical. She had folded over, with what would normally be her knees on the ground and her seat on her heels. She was slumped, her fronds wilted in front of her face. She wasn’t even trying to make an affectation of breathing.

She was still surrounded by the force field.

Jeb gave a quick glance at his Security Chief, but LaFuentes was in mission mode, channeling his rage toward finding and cataloguing targets. Gel was subtly inching toward the edge of the platform closest to Loreli. Good.

He turned to the knot of GONs who were politely gathered to one side next to the projection of Wylson. The face toward the GONs expressed calm neutrality, but the one Jeb could see most plainly had his thin mouth compressed in fury. The GONs had decorated themselves with jewels and metallic ribbons on their carapaces and had a teleprompter in between them. They showed no concern at all for the alien dying only feet away from them.

Jeb didn’t bother to ask why the shield was still in place. He just demanded they lower it.

One of the GONs, some chief muckety-muck Jeb had not spoken to, stepped forward. “Welcome, crewmen of the Impulsive.” He did not sound sincere. “I’m Click-click-kritta-chitter. I’m the elected leader of this province. I’m sorry we didn’t speak earlier; I was attending the hatching of my larvae.”

“Thank you. I’m afraid I’ve assessed the situation myself and I cannot allow it. These are dangerous times for my constituents. You’ve seen for yourself what the terrorists are capable of, and they have the philosophical backing of the majority, even if we do not agree with their methods. It’s a difficult situation.”

“I cannot lower that shield. We will dig her up and transport her to a secure facility where we can carefully extract her under controlled situations.”

“But my planet will live contaminant free. You see the greater good here, yes?”

Gel spoke up. “Captain? What if they lower the shields partway, then I can get in and coat her? Their scientists already agreed that’s safe.”

“No!” another GON shouted. “It’s a trick. Look at him. He’s not green anymore. He’s almost blue! They want to poison our land.”

Beside that one, another reached into his pouch and pulled out a weapon. “To arms! Eradicate the contaminants. Keep Breeze-rustle-chitter pure!”

“The Ship is Family!” LaFuentes retorted and shot the gun out of the GON’s hand.

Some days, I hate being right. Jeb activated his personal body armor just in time. He felt a slight warmth on his back as the energy beam someone shot him with was deflected.