I drew this picture of Wylson. As you can see, the artistic gene skipped my generation. But I love him, anyway. BTW, I would adore fan art. I’ll post it here and on my FB page with a link of your choosing (as long as it’s clean and non-political!)

Need to catch up? Read part 3 here. Gets links to all the stories here. 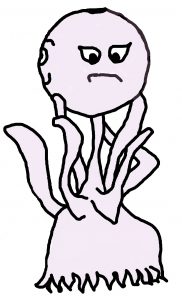 You know, I liked the Diplomatic Corp better when they were trying to take my people away for themselves.

We’ve been negotiating for two days, practically nonstop. The Pelotanns are able to go without sleep for days when necessary, and apparently, the GONs have been perfectly happy to talk with Wylson – who had been given ambassadorial status for this mission – nonstop for as long as he can keep conscious. They’ve directed him to one bureaucrat after another, on whatever part of the world was on business hours at the time, and Wylson has patiently dealt with each.

Smythe and I, however, are starting to lose ours. We are taking it in shifts to try to work out a solution with the GONs and Wylson, but they will not grant a single concession. They refuse Loreli their water because they will not give resources to an outsider. They won’t let us beam in water because they fear contamination. Either case, they say, is out of the question anyway, because they don’t want to encourage further growth. They won’t let us uproot her, even if we promise to return their soil. They won’t let anyone teleport to the planet to examine her and treat the injuries from the attack and refuse to treat her themselves. On top of that… well, you get the picture.

Loreli, meanwhile, puts on a brave front, but it’s obvious she’s fading. We may not have time for a diplomatic solution. As my people look for alternatives, I am faced with the worst duty a HuFleet Captain can have – sitting on my hands and waiting.

Jeb ignored the clutch in his stomach as he smiled reassuringly at Loreli. She drooped, her trunk crumpling in on itself. The edges of her extremities were tinged yellow.  Her hands, which had been stretched with fingers splayed to take in the sun, hung limp at her side. Her eyes were open to look at the screen, but he felt certain, they would close as soon as they finished talking. He’d make it short, but he wouldn’t be doing his job if he didn’t call in, just to let her know she wasn’t alone. She needed that hope.

She smiled thinly but with affection. “You know, you haven’t called me ‘Sprout’ so much since I graduated from the Academy. And I seem to recall when you took me on as xenologist and ship’s sexy, you said you’d never call me that again. Something about it ‘not fitting the image of a mature, desirable, unattainable woman.”

He shrugged. “Well, this whole damsel-in-distress routine has brought out the paternal in me, is all. But I do need a status report, Lieutenant.”

She nodded and tried to straighten up. “I’ve managed to retract most of my ancillary capillaries. I’m working on the greater roots now. It’s being…incredibly hard. I’m so thirsty. If I could just have a drink…”

The longing in those words, coming through bark-chapped lips tore his heart. “I know. But they won’t budge. Just keep at it. The more you accomplish, the more we can argue your good faith. I see your trunk is starting to divide. That’s good.”

He was lying, and they both knew it. True, her trunk had split, and under normal circumstances, that would be the beginning of returning to legs, but the crack was uneven, a tear rather than the carefully considered division of limb generation. Still, even though no scientists wandered around her taking soil samples this late in the evening, he figured his transmissions were being monitored. They may not understand the heroic efforts she was making fighting the survival instincts of her body to root, take in the nutrients of the soil and survive. He needed them to know. Being a captain was knowing when to lie and how to make it look convincing.

Not to mention, lie though it was, the thought calmed the lump in his throat.

“I’m doing my best, Captain. Enigo called me. He’s quite…impassioned…about my situation. Much blustering and vows to rescue me. I don’t want him seeing me like this. I… It’s not professional.”

Yet something in her posture said she’d needed that blustering. Boosting morale went both ways.

“Don’t underestimate the power of a damsel in distress. Some males find that very appealing. You know he’d never turn down a chance for thrilling heroics. I’ll talk to him about toning down the bluster.”

“He’s quite distressed himself,” she said. Her tone implied enough to do something stupid and against orders.

She nodded. She got the message. The Impulsive wasn’t below breaking a few regs themselves to save one of their own. Hadn’t Jeb done just that for a potted plant that turned out to be sentient itself?

Suddenly, there was a loud pattering, and the shield became a dripping gray ball around her.

“It’s raining again,” she whispered. Her eyes looked past the screen. She trembled.

She forced herself to look at him.

“We’ll figure this out. They aren’t going to let you die there. If you decompose, you’d ruin their soil, right?” He hated mentioning the possibility, but did so for whatever enviro-isolationist insectoid lackey was listening.

“We have other relief waiting on the Impulsive. The doctor is mixing up a nice nitrate-laden sludge, and the whole botany department is drawing lots on who gets to prune you.”

She giggled. “I’d like crewman Lin to do my hands. She does the best manicures.”

“Noted. We’ll get you out of this. We’re family,” he started the Impulsive’s motto given to them by Lieutenant LaFuentes.

“And family takes care of its own,” she concluded.

Ah, family. Chokes me up, every time I read this. Of course, one day, I’ll write one of LaFuentes’s “The Ship is Family” motivational speeches. You may choke for other reasons. In the meantime, come back next week to see how the crew gets their family back together.