When last we met, the crew of the HMB Impulsive was on a rescue mission to an alien ship of new species. Since it’s first contact, Capt. Tiberius wanted to make a good impression, so instead of simply swooping in to rescue the crew before their ship explodes, he’s offered to have Chief Engineer Deary and his Heptite assistant, Lt. Morange, fix the ship. If you missed this installment, check it out here and come back! 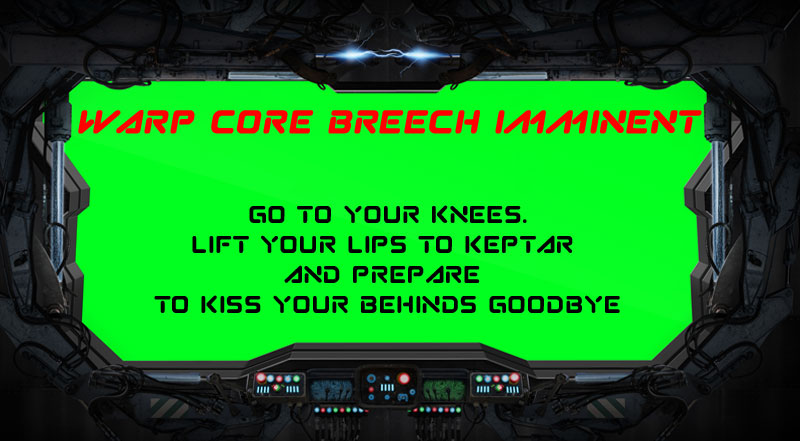 The away team boarded the teleporter pads, excited for First Contact and ready for the challenge of repairing the damaged ship. All except Lt. Morange, that is. Like the Logics, Heptites were rational, mathematical creatures, and when he’d run the odds of survival, he’s almost elected to duck into an airlock, suit up, and blast himself toward the nearest sun in hopes a friendly, familiar species would pick him up before his air ran out. The odds of survival were somewhat better.

On the way to the teleporter room, he’d mentioned this to Lieutenant LaFuentes, the security officer, who insisted they were too pretty to die but had relayed his findings to Ensign Doall for the latest ship’s pool.

His commander had told him he’d learn a lot about humans while serving on the Impulsive. Somehow, he didn’t think this is what he’d meant.

Commander Angus Deary hummed to himself as he bumped the spanner on his thigh in time to the music.

“What song is that?” the captain asked.

“Voltaire, sir,” Commander Deary replied. “The man understood man’s role in the universe, he did.”

From the teleporter console, Chief Dour cleared his throat. “Subspace is highly polarized due to the Graptarian’s malfunction. My mistress leads you on a difficult and perilous path. Perhaps it would be easier if you were silent for the preparations?”

A Heptite subordinate would have spent a day in isolation, meditating on his rudeness while suspended over a vat of man-eating larva for such a comment, but the captain merely rolled his eyes at his chief engineer. Before Morange could experiment with a rude comment of his own, they dematerialized.

They rematerialized to the controlled chaos of a ship in its death throes. The crew, who looked human enough except for wrinkled foreheads and an affinity for shiny jumpsuits, were rushing to and fro, some carrying what looked like tools while others had luggage. The translators worked overtime to record commands, pleas and prayers as a ship’s computer informed everyone that they had eight minutes to live.

Jeb Tiberius clapped his hands together. “Good! We’re early. Where do you think the captain is?”

Almost is if scripted, a Graptarian in a slightly more decorated jumpsuit approached them. “I told you not to come!”

“Yes. Please. My people are evacuating by escape pods and shuttles. Can you?’

“Oh, absolutely! We’re already prepped to pick them up, get them lunch and a tour of our ship and bring them back when my engineers here have taken care of your little problem.”

“Our little…?” The captain nodded and threw up his hands, which also had five fingers and looked human except the nails were a thick brown. “Perhaps it is your way to die in the service of others. Come.”

They started down a corridor. Lights strobed between yellow and green. LaFuentes asked, “So is that normal, or is that your alert?”

“It is our highest alert – a call to fleeing and prayer.”

The alien captain led them to a door just as it opened to a swarm of Graptarians. They froze at the sight of their captain.

‘There’s nothing else we can do!” The one holding the door panel open said.

Deary raised his box of spanners. “No worries. We brought fresh ideas.”

“Meh, I want your best five engineers to stay. The rest, flee!” the Graptarian captain ordered.

Apparently the best five were in the back of the group. They swallowed hard, their coincidentally humanish Adam’s apples bobbing in their necks, and made their way to their consoles.

Seven minutes on the clock for the crews – but you have to wait a whole week to find out what happens next. I should apologize, but I just can’t make myself do it. If you need more ST:HMB fun, join the Facebook Page. And be sure to sign up for the RSS feed to get notices when the next segment goes live. See you Wednesday. I won’t apologize, but I do promise it will be fun!