Need to catch up? Find the episode list here.

When I worked at Purch, we had a D&D gaming group that met once or twice a month. My husband was part of the group, too. It was such fun, in no small part thanks to Dan Tennant, our DM who had a flare for voices and acting. It didn’t matter what the NPC (non-player character), he had the personality down pat. The best was when he acted a whole crazy scene himself, three different characters, with input from one of the players. It took half an hour for us to stop laughing and get on with the game. (That happened a lot with this group.) I miss you guys!

I wish I could be so uninhibited, but I do the next best thing with my characters.

When last me met, Petru and Katrin had reached cliché critical mass and finally fallen in love after threatening to destroy each other. However, the Cybers were not interested in seeing the courtship end happily. (Cybers are Cybernetic beings that every SF show needs as the enemy. I think it’s a passive-aggressive way of lashing out at Windows OS. It is for me.) Petru, Edor and shuttle pilot Ensign Donner were captured by the Cyber hive. Then, the Cyber shuttle bay exploded. 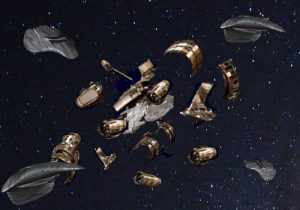 Katrin screamed and fell to her knees.

On the screen, a simulation of the ongoing battle still played. The princesses’ ship held back but the Kandor ship renewed its attack, now focusing on the injured section of the Cyber hive. The Impulsive, too continued to press its advantage, because the crew knew its job and didn’t have to wait for the captain to tell them to keep doing it. That freed captain Tiberius to handle the weakest participant in the fray: the princess.

“Courageous, get out of here – maximum warp!”

“No! We will engage the Cybers. We will break through their shields. We will board that ship and find the prince and rescue him!” Katrin stood. Despite how hard she sobbed, she managed to spit out the words with fiery vengeance befitting a monarch-to-be who had just had her True Love snatched from her on the eve of her nuptials.

The captain ordered their retreat.

“No!” Katrin ran to his chair and stabbed at the controls. “This is Princess Katrin, your future queen. You will disregard that cowardly order. You will attack the Cybers. You will save the prince!”

A voice from the back said, “But Katrin, I am already saved.”

She looked up and gasped. “But… how…?” She turned to the viewscreen (or rather, the teeny camera that let her face been seen by the crew of the Impulsive.)

Jeb shrugged. “We don’t question the transporter chief or his methods.”

Over the intercom, Dour said, “That is wise.”

“Thank you! Captain Courageous, get us home.”

The viewscreen went dark, but not before showing the princess run to the prince’s embrace and their first kiss.

She wiped a tear quickly and checked her console. “Shields at 40 percent. Donner’s safely in the shuttle bay. Edor made it to the Kandor ship as well. We were lucky we’d distracted the Cybers enough to transport them and put in that bomb.”

“Yes, sir. Shields at 38 percent. A couple of shots did get through. Transporter crews are beaming in replacement hull pieces as needed.”

Smythe said, “Mr. Cruz, we are no longer protecting the princess. If you could not fly into the shots now?”

“Sair, you can’t get blood from a turnip!”

“Tell that to the Russians. What about the Wikadas shields? Less power, more effect, you said.”

“But we’ve not run tests… Ack! What am I saying? Ten minutes.”

“An honor serving under you, Captain. Dasvidaniya. Oh, Danny boy…”

“Debris field?” Doall highlighted the scattered remains of the destroyed Kandor ship on the screen.

“Hiding behind the dead bones of our fallen friends? Tipo tosto! Changing course. How about a distraction?”

“On it!” LaFuentes said, and a scatter volley of torpedoes left the Impulsive to impact against the already-injured side of the hive. But when the flares of impact cleared, they saw pieces of the hive pulling away of the core, each under its own power. They arches away from the hive, then started toward the Impulsive.

A deep male voice came over the speakers, singing about searching for the perfect love. (If you want to hear it, click here.)

“It was ranked Number One on Earth’s twenty-first century’s most played list, early teens.”

The voice went on about exclusive commitments.

“Top annoyance of the social media age. It should corrupt their systems.”

Indeed, the Cyber ships had ceases their focused attack and buzzed about, disconcerted. As the singer launched into a repeated chorus about staying true, supportive and honest, two of the ships deliberately flew into each other.

Jeb nodded. “Nice. Catchy tune, too. Cruz, we there yet?”

“Parking us now, Captain.” Cruz’s hands, so wild in conversation, moved with Spartan efficiency as he slid the intrepid between the largest pieces of the shattered Kandor vessel. Even so, a proximity alarm sounded.

“All right. Let’s turn off the lights.”

Of course, the captain didn’t mean only the lights, but rather anything that might broadcast their location. The music stopped, although a few people hummed the chorus. All outward lights shut off and nanites darkened the glass of the windows. Transporter repairs halted. The deflector shields went off line, and the motherly voice of the Impulsive’s main computer reminded everyone to stay away from damaged outer areas of the ship without radiation suits or anti-radiation vaccines. In Sickbay, Pasteur prepared to receive patients who didn’t listen to their mother.

Tiberius returned to his seat and settled himself in comfortably. “Doall, keep an eye on those Cyber ships. Captain to Engineering. We bought you your time. Make the best of it. In the meantime, ladies and gentlemen, let’s see if we can have a rip-roaring surprise lined up for when that new shield is ready.”

As the Impulsive hides and waits and plans, it’s time for us to live our regular lives. I’m hoping you don’t need to do any hiding behind the bones of dead friends or planning attacks against hives – Cyber, insect, or otherwise. Unless, of course, it’s in the course of a D&D campaign. Have a safe week and come back next Wednesday when we launch into the exciting conclusion of The Best Laid Plans of Vegetation and Cybernetic Organisms.