Behind? Catch up by checking the episode list here. Otherwise, let’s jump in.

“Out of the frying pan and into the fire,” as my grandmomma used to say. She was a horrible cook and hated replicators, but she had a lot of colorful metaphors. Usually while cooking.

Anyway, our original mission arranging the courtship of Prince Petru and Princess Katrin has rapidly turned into a war over disputed territory and the right of my ship’s sexy to marry royalty. Which, to be clear, she has no interest in, but the Prince is adamant about rights and about having her. To make things worse, as I was trying to work things out with the Kandor captain, a Cyber hive entered the system through a transtellar gateway, and they aren’t supposed to be anywhere near this quadrant. 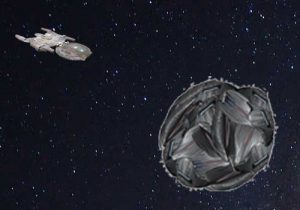 The lights flashed red and a shrill siren sounded, followed by a harsh male voice. “Get moving! This is no drill. We are in deep kimshi so get your butts to your stations. Move! Move! Move!”

Jeb stood up and pushed Prince Petru aside. “Okay, playtime’s over. Time to let the adults take over.”

“How dare you patronize me,” Katrin exclaimed.

Jeb smiled. “You’re cute when you’re riled. Captain, as soon as those Cybers recalibrate, they are going to be meaner than a nest of angry hornets. We’ll cover you. Get the princess back to your planet.”

“No,” Katrin shouted. “You must save Petru. I demand you get him to safety.”

“You’re just full of demands, aren’t you, young lady? Lucky for you, in this case, I agree.”

“We will cover your escape. Captain Courageous, to the fray!”

Behind her, Captain Courageous shut his eyes as if praying for patience.

Jeb shook his head. “I have a better idea. Why don’t we give you the prince and both get to safety? Captain to Chief Dour, transport the Prince and his councilor to the Kandor ship.”

“My mistress forbids it.”

“Captain,” Doall chimed in, “the Cybers have begun a telemetric sweep of the system. If we transport anything now, they could intercept and absorb the signal information.”

“What was predicted has come to pass,” Dour concluded.

“The old-fashioned way it is, Cruz, get Donner to prep a shuttle. LaFuentes, have security find Edor and get him on board. We’re sending him and the prince to that ship.”

“Not without my Loreli,” the prince insisted.

“My duty is on this ship,” she said from her console by Doall, where she monitored the behavior of the Cybers in hopes she would have insights to help them in or at least some really cool data to pass on in case of their deaths or integrations.

“Brave Loreli. This is why I love you. Then I will stay at your side.”

“Incoming transmission from the Cybers, Captain,” Doall reported. She put it on speaker for both ships to hear.

“We are the Cybers. We are many, yet one. We will integrate your uniqueness to our programming. Prepare for disintegration and re-intigration.  We are…”

“Blah, blah,” the Captain concluded and signaled for the transmission to be turned off. “Doall?”

“Cybers are almost done recalibrating to this system. Shields are up and holding, randomizer is running withe three crewmen inserting changes at will. A complaint has been sent to Union Intelligence concerning their recent report on Cyber activity.  And Minion First Class Ja’az in Environmental Science wins this week’s crisis pool. Donner is in the shuttle bay and warming up the Killians.”

“Donner’s on the way, Captain.”

“We don’t have time!” Katrin exclaimed. “Don’t worry about us. I have six sisters. Maybe one of them will better please the prince. Get him away and we shall defend you. Courageous, send the others to engage the hive.”

That command, apparently, Courageous could get behind. He sent the two other ships dashing away to provide a diversion.

Katrin said, “Captain Tiberius, get your ship out of here. We’ll cover your retreat.”

Petru gaped at her. “You…you would sacrifice your people for me?”

In answer, one of the Kandor ships exploded under the Cyber’s attack.

Petru flung his arm out of Gel’s grasp. “Then we fight together! Captain Tiberius, I demand control of this ship.”

Katrin set her hand on her chest. “You…would fight with me?”

“With you and for you – and always at your side! I am sorry, my Loreli, but my eyes have been opened.”

Loreli gave him a gracious nod. Katrin squealed with joy and clasped her hands in a very dainty and un-warriorlike way. Doall clicked some buttons and 30 credits and miscellaneous chore voucherss went to Minion Matrinez in Security for winning the ship pool on how the two royalty would finally fall in love.

Gel oozed his viscous body over the prince’s arms and legs. Petru screamed.

“Quit whining. You could have walked out on your own,” Gel said as he frog-marched the prince out like a puppet. Despite the warning, Petru kept shouting protests. He struggled so much that they left a trail of spatters. Immediately the Impulsive janitorial services dispatched a roving shop vac to suck up slime that dotted the floor and walls. It would later separate the bits of Gel and carry them to Sickbay to be put in stasis to reintegrate with the enthusiastic security minion later.

(Fun fact: Gel’s species has fully adaptive DNA. Every molecule can be repurposed on the fly to take over some vital function. In fact, while this species does mate, they are perfectly capable of cloning themselves from even a tablespoon of their own fluid.)

(Fun Fact 3: I’m planning on a long-running series. If you expect immediate payoff, grow accustomed to disappointment. And now, back to our story…)

When the lazivator doors shut on his last desperate cry, the crews on both ships breathed sighs of relief.

Jeb took a step toward the screen – or rather the teeny camera at the top of the screen that would note his authoritative move and focus on him instead of the closed lazivator door. “Now, young lady, you let us captains do our jobs, or I swear by my pretty flowered bonnet that I will send my security officer with the prince to escort you off that bridge.”

Jeb didn’t know for certain how the translators handled swearing by dainty headgear but whatever it used, it was effective. Katrin paled, then stepped back with a bowed head.

“Shuttle away,” Cruz reported. “Moving to engage the Cybers.”

“LaFuentes, when we’re in range, fire at will – or better yet, the Cybers.” Tiberius said.

“Captain, the Cybers are targeting the princesses’ ship!”

“Cruz, get us between them. Engineering. Deary, I need all power to the shields.”

“Into the jaws of death we go. Let’s kick a hive!” Cruz said.

Before she finished speaking, the shields flashed bright, because, after all, light travels fast then sound or human reaction.

LaFuentes didn’t even bother to announce his intentions. The captain said he could shoot; no one had to tell him twice. Among the pyrotechnic light show in the screen, they could see the Kandor ship moving toward the shuttle.

“Shields at 60 percent and holding,” Doall announced. “About one in three of our blasts are getting through. Their shields can’t adapt fast enough.”

“And we’re as random as it gets,” Enigo crowed. “Deary, give me one full power for one full spectrum shot and Dour, prepare a special delivery.”

“My lady visits death upon our enemies,” the transporter chief intoned.

The Cyber ship had captured the shuttle in a tractor beam and was pulling it toward them. The Kandor ship fired but with little effect.

“The hands of fate hover over instruments.”

The entire ship dimmed as all the energies momentarily channeled into the phasers. Yes, even life support, because everyone could survive for a few seconds without the heaters on and the scrubbers going. It’s a huge ship. The phaser banks didn’t whine so much as roar as the power escaped. The Cyber hive’s shield, vulnerable already at the point there its beam passed through, flared with the impact. The tractor beam disengaged as the Cyber shields adapted, but the shot did not get through.

The shuttle rushed away, only to be caught again before it could get out of range.

Princess Katrin’s image again showed up on a side screen. “Captain. Captain, what do we do?”

He sighed. “Courageous, get your ships out of here and back to your planet. Get ready to defend yourselves.”

The shuttle disappeared inside the Cyber hive, the bay doors closing behind it.

Then that section of the Cyber hive exploded.

Oh, no! Into the fire, indeed! What happened on the Cyber hive? Will Katrin have to settle for a cousin? Who is Donner, and what color is his uniform? Someone asked if I could post hourly – hahahaha – but sorry. You’ll have to wait until next week.

In the meantime, if you aren’t following me yet on Facebook, please join up. I share “hold my beer jokes” and ideas I’m getting that I may explore in future episodes, and I answer fan comments. I answer comments here, too, when I get them. Ahem.

On a personal note. This week, I’m with my parents in Colorado helping my dad as he recovers from knee surgery. If you pray, please ask for speedy healing for him. If you don’t, then good thoughts are also appreciated.