Missed an episode? Find the links here. We are on the road to Florida, having our own, non-SF, non-beer-related adventures. If you live around Rockledge, FL, drop me a comment!

Last episode, dear readers, we left the Impulsive under attack from within and without, as Prince Petru had challenged Lieutenant LaFuentes to a death duel for the hand of Loreli and some as-yet-unknown entity is attacking the ship. Let’s stagger to the bridge with the command crew – because the inertial dampeners were so badly designed even Deary hasn’t found a fix – and find out what’s going on! 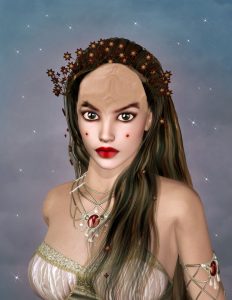 Another blast rocked the Impulsive.

Captain Tiberius staggered and caught himself on a chair, muttering an apology to the crewman doing things that were important to the ship but not interesting enough to mention. Once again, Jeb vowed that he would make Deary upgrade those dagblasted inertial dampeners. If his engineer could reverse polarity by 90 degrees, he could sure as hell handle a simple task like that. He looked at the screen to see three Kandor battle cruisers.

From his safe and secure seat, Commander Smythe said, “It would seem the jilted bride has come to make her displeasure known.”

At Security, Gel reported, “They fired once while we were hailing them, but shields were up, so no damage that time or this. Wikadas blade is not on line yet. I’ve got target locks on all ships.”

“Good job, O’Tin! You’re on the fast track for sure.” Enigo held up his knuckles. Gel bumped them with his gooey pseudopod and headed to the minion bull pen to await another chance at minor glory on the bridge. The second-string ops officer joined without comment.

Doall’s hands flew over her console. “Ready to hail Princess Katrin on the lead ship. Prince Petru is in the lazivator.”

How does she do that? Jeb wondered for the hundredth time. He knew she didn’t have a camera trained on the lazivator. He made Deary check on a regular basis. Too many people depended on that lift for a couple of minutes a “private time,” a rare thing on a ship the size of the Impulsive.

He shook off his curiosity as the front view screen came alive. In the foreground paced an angry princess, while in the back a nervous but resigned captain shrugged an apology to Jeb.

“Princess Katrin, I presume? I’m Captain Jebediah Tiberius. How wonderfully convenient that you showed up. We were about to contact you. There’s been a small mixup we’re hoping you can help us with.” Jeb put on his most beguiling smile, the one normally used for people who hadn’t already fired on his ship without warning.

The Princess Katrin did not return the favor. Her stunning face was only more impressive for her anger. She scowled with all the ridges on her forehead, and her flat-plaited hair seemed to tingle with energy.

“Where’s the hussy?” she demanded.

“You heard me! The hussy who thinks she can sashay around the prince, using her alien wiles, and take what’s rightfully mine!”

Loreli cleared her throat and stepped into view. “I believe you are referring to me. However, you are mistaken concerning the origin of Prince Petru’s misguided infatuation. If we could just discuss this…”

“Shut up, you kingdom wrecker! Look at you! You’re green, and I can’t even imagine what’s going on with your hair. What could Petru possibly see in a mealy-mouthed little skank like you?”

Jeb barely had time to register how impressed he was by the universal translator when Petru burst onto the bridge. “Pay no attention to that shrew, my fair flower!” he shouted. He hurried to Loreli’s side, then pulled her close. He glared at the viewscreen. “Why are you here? I sent you a note.”

Katrin rolled her eyes. “Wedding called off for TLA? We have a duty to our planets, and you’re going to throw away peace in our time for that…that..”

“Her name is Loreli, soon to be Princess Loreli of Clicha.”

“You’re adorable when you’re angry.” But he released her nonetheless.

Katrin said, “Oh? And you think I’m letting him keep mistresses? Skank! Captain, release this brazen minx to my custody so I can try her for treason and get on with my lawful courtship.”

“I forbid it!” the prince thundered.

The Impulsive rocked as phasers from all three ships struck its shields.

“That took us down 15 percent. Captain, let me fire back.” Enigo said.

“Everybody, hold your horses!” Jeb ordered, trusting the universal translator to say something equivalent so he didn’t need to explain the idiom. “I know you’re frustrated…”

“Shut up!” both royalty yelled at him.  Again, the Kandor ships fired.

“Shoot them!” Petru yelled at Enigo.

“I don’t take orders from you!” Enigo yelled back.

Another shot, and Doall reported shields at 80 percent.

“But come on, boss!” Enigo begged.

“Katrin, if you’d calm down for just five minutes and let me talk, we can resolve this. I’m not here to start a war.” Jeb said.

“Oh, there’s going to be a war if you don’t hand me over the wench.”

“Now that’s enough, young lady. Lieutenant Loreli is a respected member of my crew, and wenching is not in her duty description.” A comm signal beeped on his chair. He gave Doall a quizzical look and she mouthed “Kandor captain.” He grinned to himself. Had the Kandor captain called him or had Doall once again anticipated his needs? No matter. He sat down to see if he could have a calm, adult conversation with someone rational while the monarchs-to-be raged on.

“Besides, this isn’t in your jurisdiction,” Petru said, pointing to a side screen she could not see, but which showed the relative positions of all the ships on a star map. “You are in Clichan territory!”

“Yeah, right. The Kandors have claimed this land since the star famine of 2913.”

“What? Galandifax? Galandifax, who founded the first colony on Kandor? That claim transferred with him.”

“You are as stubborn as your mother!” Petru yelled.

“And you are a fickle two-timer like your father!” Katrin yelled back.

“Leave my family out of this!”

“How can I when they arranged this marriage, which you are throwing away on a vegetable!”

“Take that back!” The prince yelled.

“Actually, I am a vegetable.” Loreli said.

Katrin sneered. “So glad we agree on something.”

Petru stamped his foot. “Well I don’t. Loreli is my true love and you have no jurisdiction. Captain, I order you to fire on those invaders!”

“No one is firing at anyone!” Jeb said.

“Can I fire at the Cybers when they’re in range?” Enigo begged.

“The what?” everyone but Doall, Smythe and some needed-but-unmentioned first-string crew shouted.

The first screen split to show long range sensor scans, A Cyber hive had emerged from its transtellar gateway and was heading toward the system.

Oh, noes! The cybers are attacking – and the Union Fleet is halfway across the quadrant by now. Can the Impulsive protect the Clicha-Kandor system single-handedly? Will they have time to get Petru and Katrin to fall in love? Oh, who am I kidding? The answer isn’t “will they” but “how much fun will it be to read?”

I can’t answer that for you, but I can say it has been a blast to write. If you’ve enjoyed yourself this far, tune in next week to see some kick-ass fun as the Inpulsive takes on the Union’s greatest threat.