The Doppler Effect: Wasted Away Again in Margaritaville, Part 2

We last left Bo and Dop in the psychic clutches of a water elemental who had washed into town looking for trouble. Maybe she misread the sign. The bar may be The Corral, but there was nothing OK about it.

If you missed episode 1, read it here. Then hurry back because that elemental is meaner’n spit. Bo and Dop are going through hell and gotta keep on going. 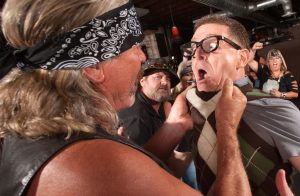 “Come on, boys,” the water spirit coaxed our entranced heroes. “Belly up to the bar. Time for some drinking and thinking.”

They continued forward. Something crunched under Bo’s foot. Trance broken, he stopped to pull a twist of metal out of his boot heel.

“A pop top? Who uses pop tops any more?”

Dop returned to him, two mugs of beer in his hands. They had an elderich glow.

Bo grimaced. “How old is that?”

“Doesn’t it get better with age?”

Our hero lunged toward his faithful friend, but to no avail. Dop chugged his beer down like he’d been walking the line down a dusty dirt road. He gasped, smacked his lips, then rubbed the back of his hand across his mouth. Above his lip, where once there’d been foam, a mustache appeared. Five o’clock shadow suddenly covered his face, even though it wasn’t past two.

Frantically, Bo dug into their emergency pack and pulled out a velvet pouch of dice from Brother Francis of Balastair’s Books and Games. “Quick Dop! Roll a saving throw!”

Dop reached into the bag, grabbed the dice, shook, then released them. Everyone cheered as he rolled a seven, but Bo groaned. He held the bag again to Doppler.

The water elemental snatched the bag from his hands. Laughing, she emptied the dice into the blender, adding them to a margarita mix. Dop took a seat on a barstool to watch.

“Hey, those were mine!” Bo protested.

“Sorry. You gotta know when to hold ‘em.”

The elemental bartendress shrugged, threatening the integrity of the fabric of her blouse, which had changed to a white tank top. “So, what’ll it be?”

Bo scanned the ingredients of the bar, thinking fast. “Pomegranate and kiwi margarita.”

The patrons laughed, but the elemental sauntered into the back after fresh kiwi. Over her shoulder, she said, “If you’ve got the money, honey.”

In a flash, Bo kicked his unwary friend in the shin. Dops leg swung and connected with the guy standing next to him, who spilled his drink on a passer-by. That person, already off-balance by one too many, stumbled into a cowboy wearing beer glasses who was just about to ask a rather homely but good-hearted woman to dance. The impact propelled him face-first into her cleavage, which is where he had been looking, anyway.

Any hope of discovering her true beauty and good heart was lost as she stood, shrieking like a banshee. He did discover, however, that she had a mean left hook. The whack! was heard even above the music. Folks looked their direction.

“A distraction! Excellent idea, Dop!” Bo shouted as he dodged a flying chair thrown by some union men at an off-duty enlisted man home on leave and on his way to propose to his girl (thank you for your service; God bless the USA). Bo patted his own pockets, and his eyes grew with panic.

“The salt! Dop, where’s the salt? Help me… Dop, why are you looking into the bar mirror?”

“I’m getting better looking. Can we come back tomorrow? I can’t wait to look in this mirror again.”

“Never mind that! Help me find the salt.”

As chairs and bodies flew, they patted their pockets and clothes and searched the floor, kicking peanuts and cigarette butts and the occasional pop top. Suddenly, Dop grabbed Bo by the arm and reached into his shirt pocket. He came away with a salt shaker.

“It’s not my lost shaker of salt?”

“Brilliant! Quick!” Bo retrieved Dop’s shaker and they emptied the contents into the plate of salt behind the bar, just as the water elemental returned with a kiwi.

She acknowledged the chaos taking place with a roll of her eyes and a smile, but otherwise concerned herself with mixing the drink. As the blender destroyed the fruit, she dipped the glass into the salt.

She poured in the mix and handed it to Bo. He held up his hand in refusal.

“How do I know it’s not chalky from the dice?”

She huffed in exasperation, but lifted the glass to her lips. When they touched the salt, she gave an otherworldly scream as her lips cracked with holy dehydration (Batman! – Come on, you know you wanted to say it.) Her body warped and she propelled herself into the margarita to rehydrate, but with the blessed dice in the mix, she found herself trapped by her own foolish ways.

The glass fell into the sink and the water elemental, now blended rather than distilled, slid down the drain.

His victory was cut short as a man was thrown onto the bar and slid bodily over its length before smacking into a couple making out at the end.

“Pulling out my record?”

“Because it’s the perfect compilation of country and western songs?”

Together, like a football team of two, our heroes ran to the turntable, Dop clutching the record protectively while Bo cleared a path through the fighters, drinkers, and lovers. Dop dropped the LP on the turntable while Bo sprayed it with Holy Water. Then they played it backward.

The effect was almost immediate. People sobered up. Fights stopped. Couples reconciled. Broken furniture replaced itself. Peanuts popped out of Coke cans and took their rightful place in snack bowls. Salt shakers returned to tables and not a pop top was to be seen. Conversation turned back to grumbles about government spending.

Bo and Dop surveyed the scene and gave a coordinated sigh of relief. Then they high-fived, because it’s hard to be humble, and strode out of the bar.

When they got to the truck, Bo gave a yelp of surprise. “My truck!”

A repairman had already replaced the broken headlight while the woman who broke it stood watching. She walked over to Bo. “Yeah. I’m sorry about that. I don’t know happened to me. I mean, I’m so over Jesse. I wanted to make it up to you, and this guy was here with his repair truck, and…”

A promise to call, maybe, later, and Bo climbed into the truck with a phone number in his hand. “Dop? Did you see that? I think I got the girl! I… Dop, what’s going on?”

Dop looked up from where he had buried his face into the fur of a happy, panting, golden retriever. “Bo. It’s Buster. It’s really Buster. I got my dog back.”