The Doppler Effect: Wasted Away Again in Margaritaville, Part 1

Perhaps you remember the silly story I wrote about some supernatural hunters: The Doppler Effect? If not, go check it out. It’s cute, and another of the for-the-love writing I’m doing on this blog. Today, I have the next episode:

The Doppler Effect: Wasting Away Again in Margaritaville 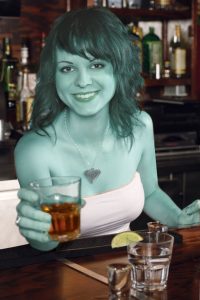 Chaos again threatens the city. Reports of demon possession and magical mayhem taking place in a local country and western bar, The Corral, fill the news as the city calls upon its two best spirits-hunters, Bo and Doppler. Let’s join them as they prepare for the biggest challenge of their careers thus far:

Bo shoves things into the back of his pickup as he calls out inventory. “Holy water squirt guns, recharged. Check. Tire iron?”

Doppler passes him the tool. “Blessed by Father Erik. Check.”

“We broke it playing ring toss on that minotaur.”

“Damn. Do we have blessed salt?”

Doppler hands him a shaker of St. John’s Demon-Drying Blessed Dead Sea Salts, which he stuffs into his shirt pocket. “Check.”

“Great. Record. Che– Dop, why are we taking a record on a demon hunt?”

“This is the perfect compilation of country and western songs of all time?”

“The bar has a turntable?”

Our intrepid heroes race to the scene, music high and CB radio reporting no Smokeys along the route. The bar was just out of town. The lot was packed, but our duo expected that. Tax day was coming, and people were gathering their courage before filing. Bo double parked in front of the entrance. Official business, after all.

As they reach behind the seat to grab their supplies, they heard a crash. Bo leapt out of his truck in time to see an angry, yet well-built, woman in cowboy boots, tight jeans and a flannel shirt taking a bat to his other headlight.

She looked up, eyes wild with supernatural hate. Then they cleared. “Oh, wow. Sorry. I thought this was my cheating ex-boyfriend’s truck. Glad I didn’t key my name in the seats yet. That would have been embarrassing.”

She slung the bat over her shoulder and sauntered away, whistling a breakup-revenge song.

“What about my truck?” Bo called, but she just waved. Cold-hearted woman.

Bo took a step to follow, but someone got tossed out of the bar, just missing the guy on the porch playing a banjo, but knocking over a spittoon. It was enough to bring our dedicated hero’s mind back to the mission. He took his pack from Dop, and they rushed inside, stepping around the oozing tobacco juice mixing with the peanut shells on the wood porch.

They expected to find pandemonium, but the Greek god was nowhere in site. Instead, people crowded the floor dancing – some fast, some slow, as if listening to different songs. A man knocked back drinks and cried while watching a woman dance with another suitor. By the pool table, a fight had broken out…over cards. A man carrying a basket of fries wandered from table to table, eyes blank but despairing, asking if anyone had seen the salt.

“And the feeling’s not right.”

“Wouldn’t that be at the roller rink Downtown?”

A cheer rose from the bar. Our heroes turned. A willowy blonde in tight cutoffs and Daily May blouse was handing out beers. No one seemed to care that her skin was blue and her legs ended in fins.

“This one’s on me!” she shouted and poured the beer over her head. She didn’t get wet; she had observed the liquid.

Too late. The spirit, watery or distilled, saw the pair. She fixed Dop and Bo with her gaze.

Caught in her trance like flies caught in honey, they approach the bar.

Will our heroes break free of the spirit’s spell? Will they rescue the patrons from this bad re-imagining of a country music video? How many Country-Western clichés can you cram into a short story? Tune in next week for Wasted in Margaritaville 2.