Last time I talked about writing, I mentioned that I had kept writing despite having fallen out of love with it. Today, I want to talk about how I did that because it ties in with the dreaded writer’s block. 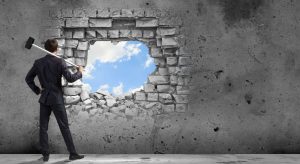 Writer’s Block? Not if you have the right sledgehammer.

Those of you who know me or have heard me present at workshops know I don’t believe in writer’s block. I do think there are plenty of reasons a writer might have difficulty getting words on the page, but some powerful wall between you and your muse is not one of them. I believe that whatever keeps you from getting words on paper is something you can identify and overcome – even if you aren’t in love with your work.

When I first started writing, I loved it. I looked forward to reconnecting with my characters and worlds, even if only for a few sentences a day. (And yes, it’s OK to write only 50 words a day and still call yourself an author.) My characters never stopped talking to me. I was eager to share my ideas or my finished stories with my kids. Story time, even when the oldest two were teens, came from my WIPs. I jumped at any chance to have my stuff published, and was satisfied with the praise of my publishers and a handful of friends.

Fifteen years later, however, I wasn’t as excited and hopeful. Our family has had some major challenges and my books have not achieved commercial success. I’ve struggled with might- 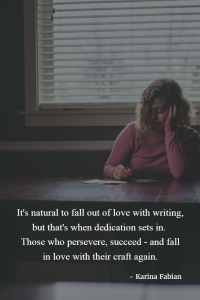 have-beens and doubts about whether putting so much time into my stories has been worth it.
My characters don’t talk as much as they used to. I was laughed t – not with, but AT – at a conference when I told a group of several hundred people the kind of books I wrote. Three publishers I loved to work with quit, and I’ve not made it into the big publishing companies I’d aspired to.

There are times when I’ve wanted to chuck my computer and quit altogether. But discouraged as I was, one thing never left: I love telling stories. Just like a woman who loves her husband even when the marriage is rough, I clung to that love, and it got me through to rough years.

I put in some hard work the past couple of years writing despite not “feeling it.” That meant writing even when I was discouraged. It meant sending out my manuscripts, even when I was not hopeful about the prospects. Not only did I send again to major publishers, but I took a chance on a micro-press, Full Quiver Publishing, owned by a friend who I admired and had seen do well with other books.

What happened with those submissions? More rejections, but Full Quiver published Discovery, and it’s been one of my best-received books yet.

Next, I took pressure off myself. This is not an easy one for me. I have dreams of being a best-seller, or at least of making enough money to make a significant contribution to the household budget. Instead, I took a writing job at Top Ten Reviews. Originally, it was a way to keep up our income after Rob retired, but now, I stay because I enjoy the work and adore the people I work with. Plus, they’ve done a lot to re-affirm my skills as a writer, and I’ve learned a lot.

Even more than finding an alternate income, I gave myself permission to treat writing like a hobby and a way to bring joy to others, even if it’s only a few people.

I pursued new opportunities to grow. I took a marketing class and applied for a writing workshop that extended into a long-term critique group and mentoring with a best-selling author.

Then, I worked to figure out why I was no longer so enthusiastic about certain characters I still adored. Vern, the dragon detective of my DragonEye series is a prime example. It took 50,000 words and some very harsh critiques from my mentor (and yes, I cried) before I got back into the groove with a story I am excited about writing. 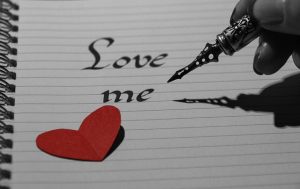 Finally, I have given myself permission to play with my writing. As I’d grown in success, I had started to get more particular about when and what I wrote. I was pursuing commercial success as well. Now, at least for now, I’m going to follow the fun. I’m going to write – and publish – when I’m having fun, when it’s cathartic, when I have a hair-brained idea. If I can sell it, hooray, but that’s not on my radar this year, at least.

I’m starting to get to that energy stage again, where I am excited to clock out at work, grab my laptop, and sit on the couch to write for 15 minutes or an hour or two before I had home. But I think if I had not said that I would continue to pursue my writing even when it was hard, I would not have come through on the other side of strife to enjoying my avocation again.

Speaking of fun – next week, I’m talking about Space Traipse: Hold My Beer. The first episode launches April 19, but I’ll share some of my adventures writing it!