Neeta Lyffe, Zombie Exterminator in I Left My Brains in San Francisco 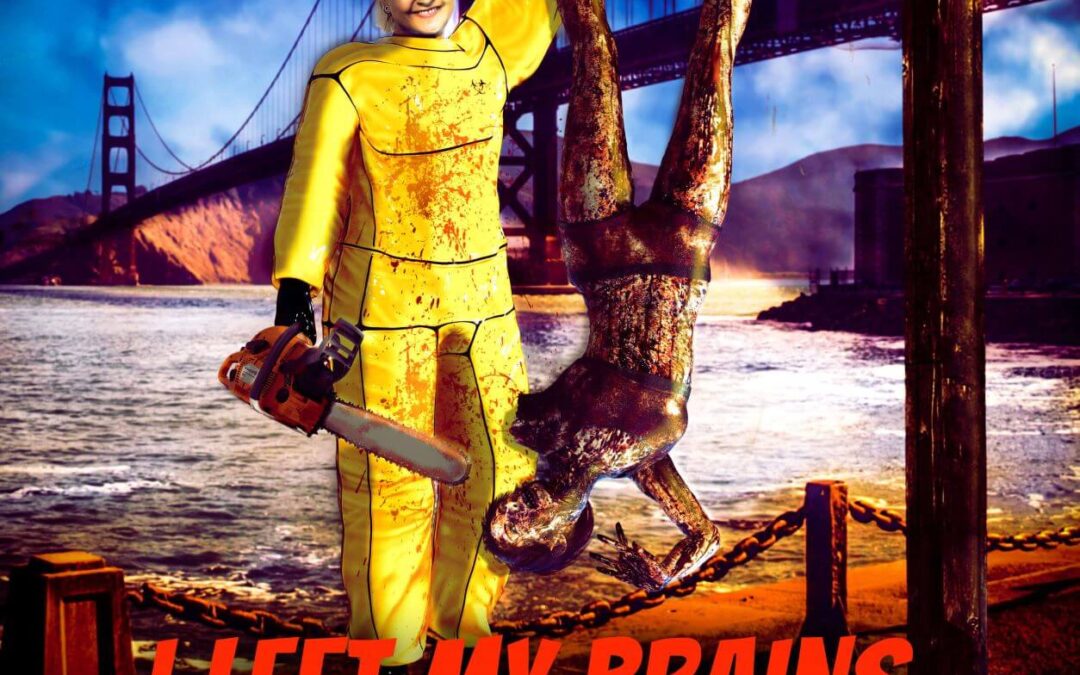 Hooray for Zombie Humor! The second Neeta Lyffe book, I Left My Brains in San Francisco, is out again. 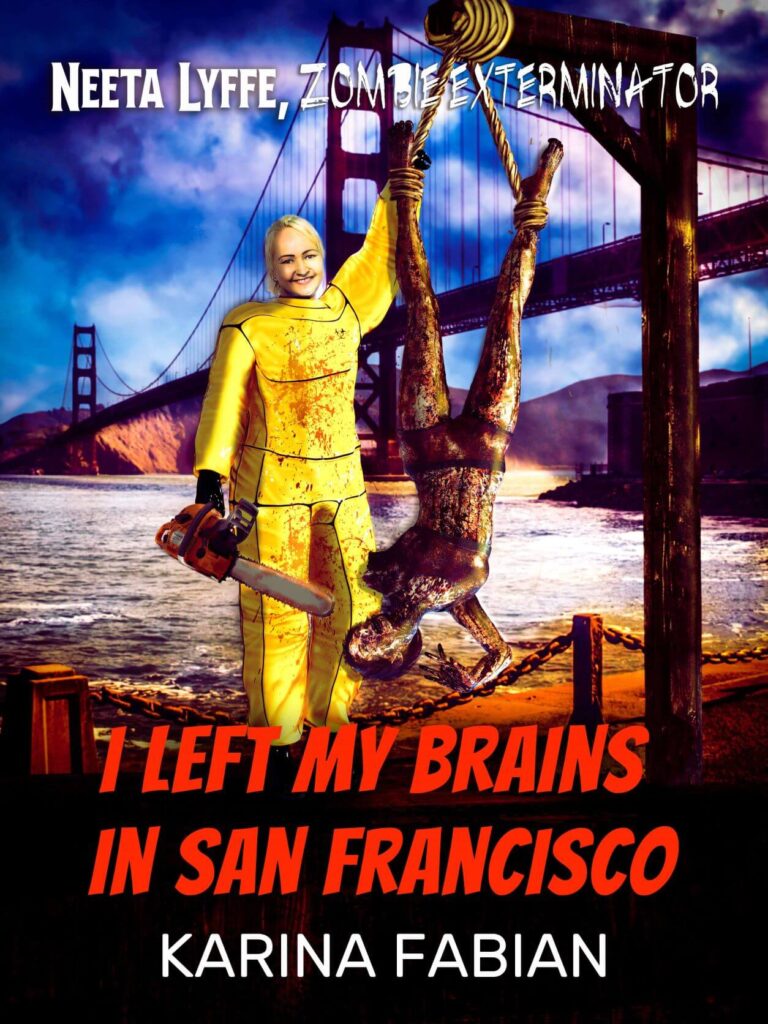 On vacation at an exterminator’s convention, she’s looking to relax, have fun, and figure out her relationship with her boyfriend, Ted. Too bad the zombies have a different idea. They rise from their watery graves to take over the City by the Bay…and destroy any chance of downtime with Ted.

Can Neeta find time between lopping off heads to bare her heart?

Enjoy the thrill of re-kill with Neeta Lyffe, Zombie Exterminator. Get your copy now.

I had a lot of fun writing this one. It’s based in San Francisco/Richmond, back when my brother-in-law was working at the Chevron refinery there. He thought it would be fun to have zombies attack a refinery, and I took it to ridiculous extremes. So you find environmental terrorist zombies, alternate fuels of the weirdest kind, a zombie exterminator convention, zombies on the Golden Gate, and more. Neeta and Ted develop their relationship, which has a few bumps. There’s a little bit of a “love” triangle – or, since Neeta is really bad at making someone jealous and Ted is happily oblivious to everything, not much.

Get it on Amazon.

This is by far my favorite scene.

Survival Hardware hadn’t seen such a rush of customers since the last Armageddon prediction coincided with Black Friday.

Manager Clint Sanders rubbed his hands with glee.  What a stroke of luck that the chainsaw shipment had come early.  And those videos that Marcel guy had talked him into selling on commission?  He’d jacked up the prices twice before they were gone.  He’d be vacationing in Maui before anyone had read the “All Sales Final” warning on their receipt.  If only his old partner, Marley, were here to see it.

A couple of stock boys approached, one carrying a large box, the other a police-issue-style billy club and pepper spray.  They were dressed in HazMat suits with the attached headgear and the Survival Hardware logo on the back.  For that matter, over half the store was dressed in suits, either worn in or purchased on the spot.  It was a beautiful sight!

Oh, Marley, if only you hadn’t gotten drunk and decided to go zombie hunting.  Could it have only been last Christmas?  You would have loved this.

“Sir, here are the last of the you-know-whats,” he whispered.

Clint looked at the box of HazMat suits and clapped his hands together.  “Excellent!  Take them to the counter with the bulletproof glass.  We’ll be handing them out one at a time.  Jason, we’ll need security.  Get Dirk, Kent and Lindsey and arm them with pepper spray.  Remember: pepper spray is your best friend.”

He left them to their duties and hurried to Customer Service, crafting an announcement in his mind.  No wimpy “Attention Shoppers!” at S.H.  “Listen up, survivors!  If you want to live, form a neat line…”  Maybe, “My people are armed, so if you want a suit…”

Yeah, he liked that.  Sense of urgency, plus the “We’re in this together” crap people professed to believe.

He got to the counter and nodded at Bitsy, who had rung up a chainsaw and a half-crate of bleach while the customer complained that he couldn’t purchase more, especially since he had cash.  Apparently, he’d been griping for some time, all the while holding his wallet but not pulling said cash from it, while Bitsy again explained their survival rush policy and people behind him started to grumble.

The man saw Clint and demanded to speak to him.

“You want the manager?” Bitsy snarled.  “Manage this:  Pay or get out!”

God bless survivors, Clint thought as he continued to the back.  Out of habit, he checked the exit door, even though it was always locked from the outside, with a six-digit combination and thumbprint set for only himself and his late partner.  That reminded him: he really needed to delete Marley’s old code from it sometime.

He set the volume higher to get over the general din of the store, and cleared his throat.  “Attention shoppers!”  He winced.

He keyed off the mike and yelled at the door, “Use the entrance!” before he tried again.

“That’s impossible!” he declared, not realizing the mike was still keyed.  The store fell silent.  He could hear the electronic clicking of the lock.

“What?”  He realized the mike was hot.  “That’s not what I meant!  Hang on.  Security team to customer service, ASAP!”

He dropped the mike and reached under the counter for a shotgun.  Bitsy grabbed the chainsaw.  She primed the pump.  They had filled them all that morning—another example of the excellent service at Survival Hardware.

The customer reached for it.  “That’s mine!”

She butted him in the face with engine.  “You haven’t paid!  Boss, headgear.”

He pulled it over his head as the lock buzzed.

The door swung open, and the zombiefied remains of his late business partner, Marley, staggered through the door.

Dirk vaulted the counter and let him have it full in the face.

“Friend!” Marley laughed, but it was enough time for Clint to shake himself from his stupor and blast him with the shotgun.  The impact knocked the Marley out the door.

Clint used the sight on the gun to scan the parking lot.  “He brought friends!  Bitsy, get the door.  Dirk, call Nine-One-One.  I’m putting this place on shutdown.”

“Screw that!  Bitsy yelled.  “I’ve been prepping all my life for this!”  With a howl of challenge, she dashed out the door.  She swung low and decapitated her former boss before moving on.

Thundering footsteps signaled the customers following in her wake.

He gaped at the carnage while Dirk called 9-1-1.  It’d be too late by the time they got there.  All that’d be left was to clean up the zombie parts and get the customers back in to pay.