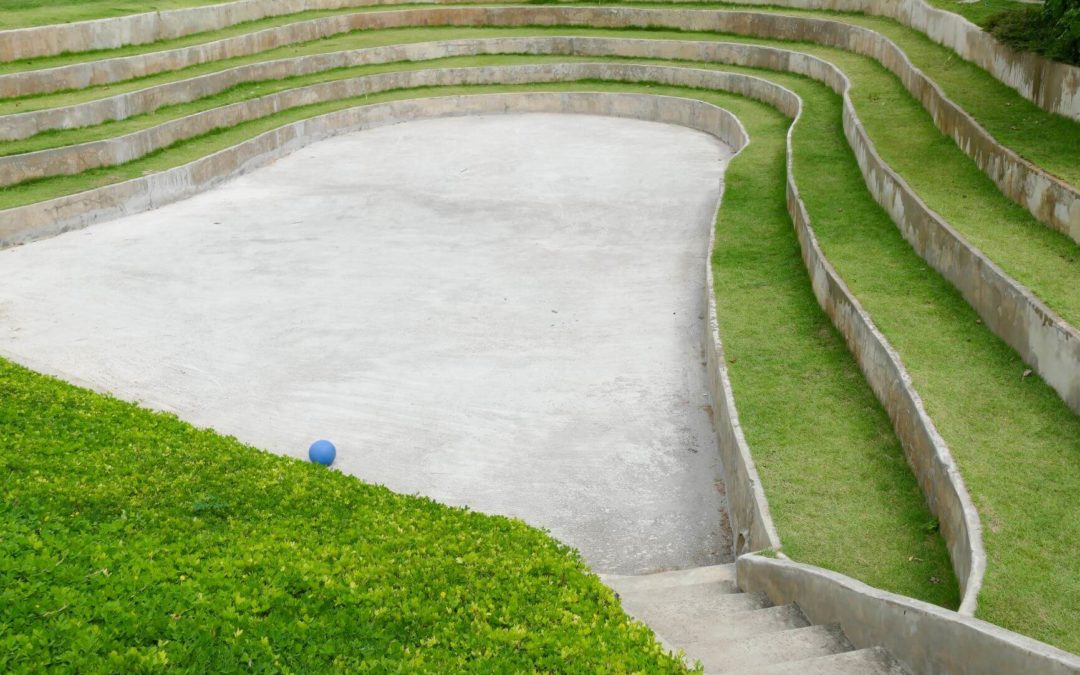 Once again, forgive my lack of mad photoshop skills. Also, at the time of this posting (June 23), I am working full time, putting together Space Traipse 3, and writing stories for anthologies – plus, my dragon. Vern, is insisting I finish his second book. So I’m a little rushed. This is kind of what the cargo bay looks like. Incidentally, two of the anthology stories – maybe three – are Space Traipse stories. 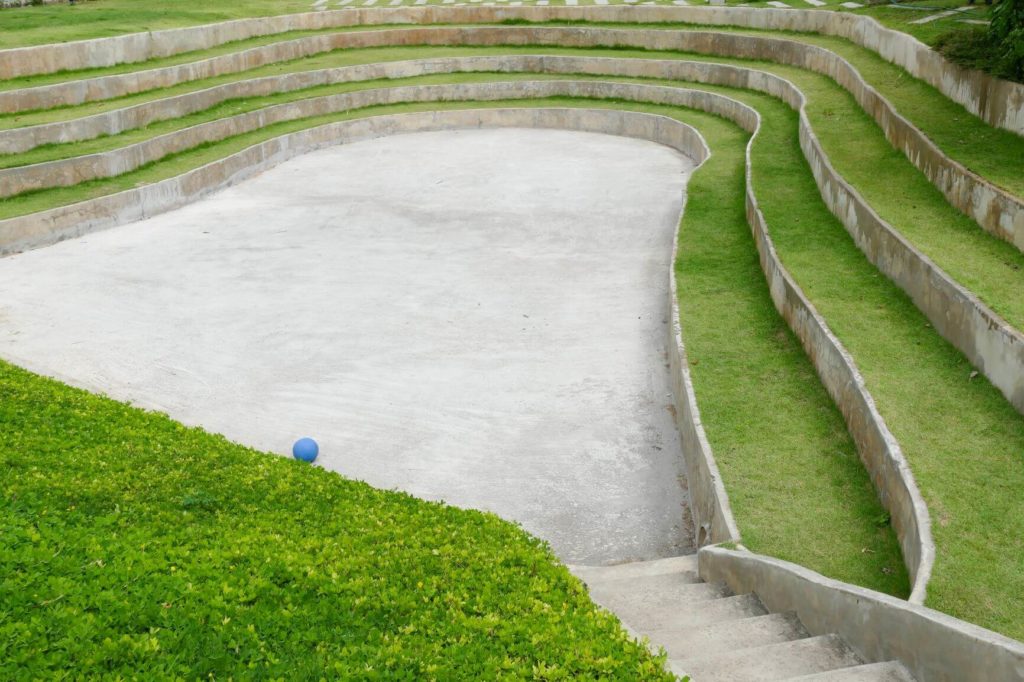 With the Impulsive and the Scenic Route crews attending, the variety show had been moved to the largest cargo bay on the station, but you couldn’t tell from looking at it. Gloria Joy insisted on creating a comfortable but unique experience, and what Gloria Joy Dour wanted, Gloria Joy Dour got.

So rather than an indoor theater, the bay had been made up as an outdoor amphitheater, with blue skies (projected) and a simple stage surrounded 180 degrees by elevated bench seating. These were all replicated by her own proprietary design. The seats looked like rock, but were in fact, very comfortable. The stage was set at the perfect distance and height that everyone got a good view, and Gloria Joy had made Dolfrick wander around the stage reciting his poetry while she tweaked the acoustic plating around the bay.

As a result, anything from the stage could be heard with perfect clarity, while the noise of the waiting crowd was just a dim roar. The seating split rather evenly between the two crews, with the Impulsive security team claiming a central section from which to cheer their L.T. Ellie and Tod sat in seats in front of them. Ellie was turned around in her seat so she could show Leslie and Gel her engagement ring. After her acceptance, she and Todd had gone back to her room so they could design it together. Rather than a large diamond, still a traditional choice among humans, hers held 45 small citrine chips in the shape of a dandelion bloom.

In the front row, Jeb pretended to mope a little about losing the ship’s pool, telling Phin it was all their fault for giving her the day off. Then, the doors opened, and instinct made him look up. Captain Kat Genoa headed his way. She wore tight jeans and a loose, low-cut blouse and somehow, Jeb thought she looked even better than she had the night before. He was so glad he was wearing his hat, despite Phin’s warnings that it was rude to wear in a theater.

When she got to the pair, she eyed the Stetson, then with a frown of mock disapproval, whipped it off his head. She spun it between her fingers, then settled it onto her lap as she sat down. Then, she turned away from him to talk to her crewmen. Todd leaned forward to ask her to sign a collector’s card, and she asked about his brother and cooed over Ellie’s ring.

Jeb forced his face into something resembling neutrality, but he knew he was as smitten as his Ops officer. When the sky started to darken and take on the pinks of sunset, he slipped his hand onto her leg under the hat. She gave him a sidelong glance and a smirk, but otherwise, pretended not to notice.

Toward the top of the amphitheater, the holographic doctors sat together. The Scenic Route doctor was pointing things out and Doc Sorcha was letting him while she did her own observations, because she’d concluded that he was not going to give up his analog prattling around her. Sorcha was running Ship’s Sexy Casual Afternoon Program 3, and the Scenic Route holodoc was preening like he’d won the lottery.

Seeing Jeb’s casual flirtation, the doctor decided to imitate the gesture and put his hand on Sorcha’s thigh. Without turning her attention from the crowd, she set a hand over his and disrupted his holoemission to halfway up his arm. He yanked his arm away, giving her a shocked, dirty look that she ignored.

The stage lit up, the spotlight on Gloria Joy. She welcomed everyone and introduced the first act, a chorus of popular songs from the Sol system.

For the next hour, people clapped, laughed, and cheered as the performers – and Dolfrick, whenever anyone caught the black-clad teleporter chief moving a piece of the stage. If they could not see his glare, they felt it, which only encouraged some of the Impulsive crew to cheer harder. Jeb whistled through his fingers for the baton twirler. The flashing metal tube and tasseled white boots took him back to his high school marching band days.

Then, Gloria Joy came out to introduce the last act before the final chorus.

“We have seen representations of cultures across our section of space, but there’s one culture that has always been a mystery. When most people think of the UGS Hood, they think only of violence and division. They have been shunned as a ship and respected individually only for those warlike traits that have But as I have come to know more about these people through my friendship with Marisol and her parents, I have seen so much more. Loyalty. Intelligence. Compassion. And hope! Oh, so much hope soaring from a history of grief. There is no better way to express that than in music. But first – we must travel to the UGS Hood!”

She spread her arms, and suddenly, the room began to change. The twilight sky and grassy knoll became hard, metal bulkheads. The stage transformed into a knotwork of pipes. Nestled into them was Enigo. He wore brown leather pants (actually, Dread Oog hide, a detail Gloria Joy tactfully omitted). His shirt was two strips of brightly patterned material that crisscrossed in the back and hung loosely over his chest, weighted down by metallic lace. He cradled his guitar.

Minion Jenkins started to whoop and what quickly silenced by his peers. Enigo has made it clear that if anyone took the focus off his chica, the entire Security Staff would be running laps on the hull.

When Marisol came out, also in hide pants, but with a blouse full of flounces and a train, the crowd went appropriately wild. Enigo silenced them with a strum that echoed off the artificial bulkheads. He played an introduction, then Marisol took over with the trumpet.

The notes poured out, strong and energetic, too wild to be martial but with the same effect of stirring the blood. Security from both ships whooped approval.

But then the melody slowed, growing haunting and anguished. The crowd grew silent, each one of the audience remembering a lost comrade, an opportunity missed, a regret not resolved.

Jeb heard sniffles behind him. Ellie, or maybe Leslie Straus. He glanced to his side. Kat had her fist pressed against her tightly closed lips. She watched the stage with grim determination, but her cheeks were wet with tears. Surreptitiously, he pulled out his handkerchief and passed it to her.

As if sensing the crowd was reaching its emotional limits, the song changed again. The tempo remained contemplative, but the key changed, reassuring with notes and tones that spoke of healing and hope. Then is grew past comfort to determination before ending with one last, optimistic, victorious note.

Marisol lowered her instrument and regarded the audience, panting and elated.

For a long moment, there was silence. Then LeRoy leaped to his feet with a howl of approval. Everyone stood, and the room echoed with applause.

Laughing, her own eyes misty with tears, Marisol bowed, then gestured to her father. He shook his head and directed the adulation back to her.

After that performance, the finale was anticlimactic, but no variety show is complete without everyone doing the last song-and-dance and taking another bow. Then, Gloria Joy stepped forward for her farewell speech.

“…We leave you now to continue your adventures among the stars. But in the universe of our lives, love is many stars. The warm glow of parent for child. The bright shine of new love or the steadfast glow of longtime friendship. Even the erratic twinkle of a sister’s love for her bratty brother!” She glanced backstage and giggled. “Space is vast and empty. And yet, we don’t see that. We see the stars. As you look at your own lives – past, present, and future – it’s my wish-upon-a-star that you see the starlight that comes from love.”