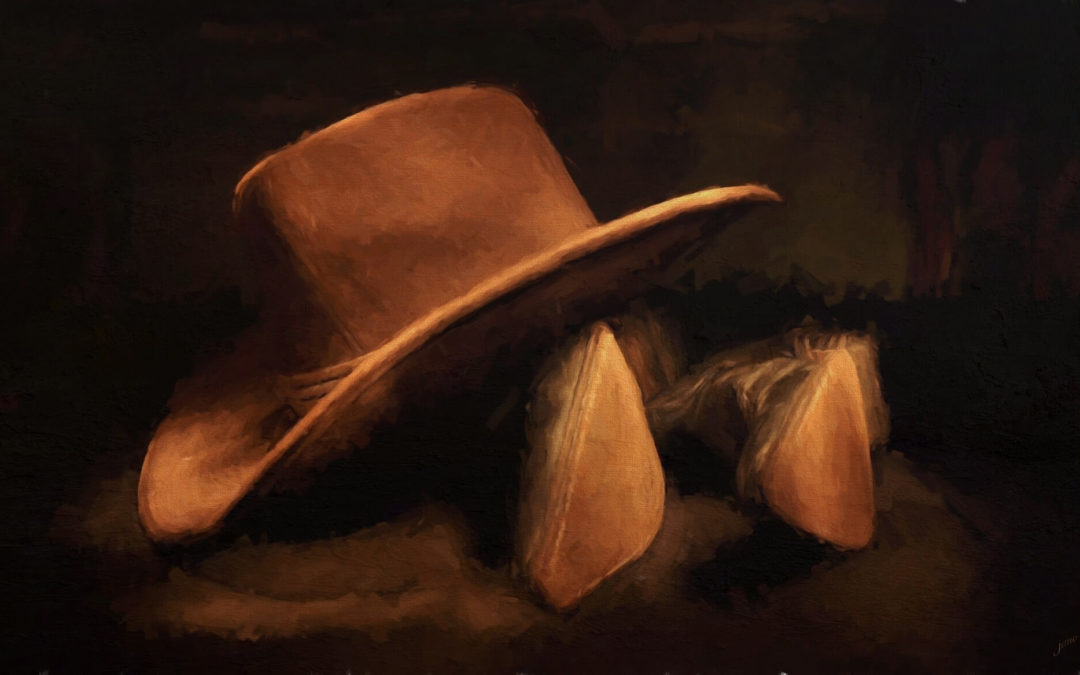 It’s the Captain’s turn! Jeb does not get a lot of screen time, but he gets to have more fun in a story I just wrote, “Doall’s Brain!” which is going to be in an upcoming anthology. I’ll post a link on the Space Traipse Page when I get it. 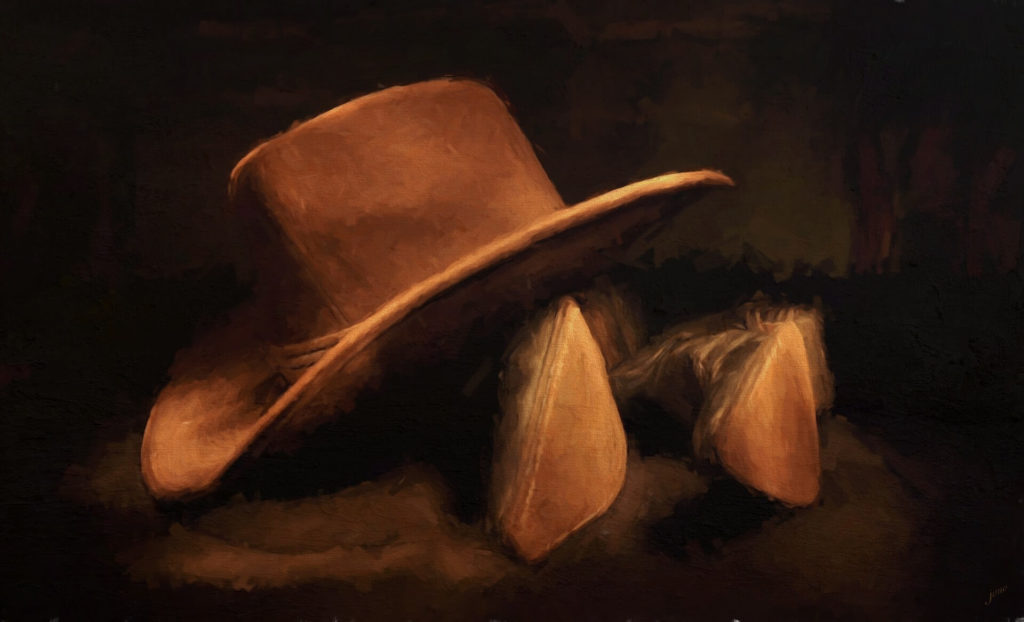 Phineas rang the chime to Jeb’s quarters and entered when invited. In the crook of his arm balanced an old-fashioned picnic basket with a big red bow. A querulous meow issued from it. One of Chief Loggins’ minions had been on his way to deliver it, but Phineas intercepted him and took on the chore. He knew why Jeb had sent the logistics officer after a katt and who it was for.

He found his CO and best friend leaning into a mirror, carefully trimming his beard. Earlier that day, he’d used a follicle stimulator to quick-grow a rugged five o’clock shadow. He wore polished cowboy boots, tight jeans, and a button-down shirt. The buttons were pearl snaps that matched the collar tabs. On the counter beside him was his cowboy hat.

Phineas sighed. He thought Jeb had gotten over her seven years ago.

“She knows about the hat, you know.”

Jeb frowned as he regarded the tan Stetson. When he wasn’t in Texas, he generally only wore it when riding, when he needed to display his ethnic heritage, or when he was hoping a beautiful woman would give him a reason to remove it.

“I thought you gave up on Katika after she married your cousin.”

“She ain’t married to him anymore,” Jeb said, “and she invited me to dinner – and you’ll note you were not included in the invitation. Still, point taken. Hey, Loggie found one!” He opened the basket and reached in to caress the silky fur of the katt.

Katts, for those who have not read earlier stories or who have forgotten, are genetically engineered small mammals designed specifically for life aboard starships. They have the amiability and desire to please of dogs but the independent nature of cats. Skilled predators with stomachs of steel, they wander the vents and nooks of a ship looking for vermin that inevitably end up on a ship despite the best screenings, but they are also up for cuddles and have an instinct for knowing when a crewman is in need of purr therapy. They also “go” only in their kattboxes.

Jeb had given Katika a katt when she took command of the Scenic Route, but she’d told them Claws II had died in the gamma quadrant. He’d immediately asked Chief Loggins to find another.

Looking at the grin on Jeb’s face as he scratched the kitten’s ears made Phineas want to sigh again. “Just don’t expect too much? There’s one sure way to know if a woman wants to be kissed.”

Jeb rolled his eyes. “I remember your trick.”

Jeb chuckled with fond exasperation as he tucked the katt back into the basket. “All right. I’ll remember. And if she just wants a platonic dinner with old friends, I’m okay with that. I’m just glad to see her back safe.”

Phineas had his doubts, but when they exited together, Jeb left his hat behind.

The UFS Scenic Route was a sleek vessel for exploring uncharted deep space and for going extended periods without encountering a Union station or habitable world. Thus, it had been designed for science and for luxurious hominess to keep the crew comfortable. During the extended time between star systems. It had not, however, been designed for five years in often hostile territory, and every scorch mark and replaced panel was a testimony to the grit of the crew and the leadership of their captain. Even so, it would still be in drydock undergoing repairs after the Impulsive was back on duty.

Still, Jeb had to admire the wide, windowed halls and soft carpet that muffled the sound of his boots as he made his way to the captain’s quarters.

Don’t get yer hopes up, he reminded himself as he took a breath, checked the tuck of his shirt, and rang the chime.

Kat opened the door wearing a loose, peach-colored silk shirt and matching pants. Her hair was down and her make-up definitely not at her usual conservative level.

She laughed and looked him over carefully. “Howdy yourself. No hat?”

He was suddenly glad he’d taken Phin’s advice. He would’ve come off as too eager. “I wasn’t sure what kind of dinner this was,” he said.

“Oh. You’ve gotten wiser since we last saw each other. Come in.” She backed up to let him enter, then pointed at the basket. “For me?”

He handed it to her, careful not to let their hands touch, enjoying the anticipation as well as the instant camaraderie. “I know you prefer dogs, but…”

“No ship should be without a katt,” they finished together.

“Oh, Jeb. He’s darling!” She reached in and picked up the katt, cuddling it close and scratching it behind the ears. It bumped its head under her chin. “And you were right about a ship needing a katt. Claws II certainly earned his keep, and not just in comforting the crew. He actually saved us once.”

“Mm-hmm. We were being experimented on by hyper-intelligent pan-dimensional beings. We had no idea, but they were trying different experiments on each of us. I had a migraine for three weeks. My first officer went prematurely gray. Two of my crew couldn’t keep their hands off each other… Anyway, we had no idea what was going on until ‘Two left a dead little rodent on my pillow. The next day, he left another one. After the fifth one, my headaches were gone, and people started getting back to normal.

“By this time, we’d been through enough that we were not going to assume we had a mouse infestation, so we did a closer examination and discovered the ‘mice’ were a protrusion into our dimension of the scientists doing the experiments. You should be getting a sensor update with their dimensional frequency, just in case they start making inroads to our section of space. In the meantime, keep an eye out for white mice. Little white mice – it makes an odd kind of sense, doesn’t it?”

As she spoke, she made her way to the replicator. Jeb followed. Still snuggling her newest crew member, she ordered the replicator, “Feline supplement 129, a bowl of water, and a temporary kattbox.” Jeb helped her put the things in a corner, and she set down the katt in front of the bowl, where it ate tidily. She ran two fingers along its back, making it arch.

Still stroking the katt, she turned her head to cock a brow at him.

“Seriously, you are. I didn’t expect to see you dressed so… I thought you might be…” He shrugged.

She stood, and brushed off her blouse, a dog-lover’s habit, since katts did not shed. She ordered a couple of drinks and handed him one. “Jeb. I got over Grant three years and four lovers ago.”

He almost choked on his drink. “Lovers? You?”

Now she laughed and led them to the couch. They sat apart but facing each other. “I know, I know. I was always so focused. But after Grant, and with all the stress of our predicament and the many, many attractive males in the gamma quadrant… It just didn’t make sense anymore.”

She studied her glass as she spoke, running one finger along its rim. “It’s funny, in a way. Grant and I knew this was a five-year command. After that, I was going to retire, take a civilian job, start a family. When we got trapped in the gamma quadrant, I told myself, I’d give it five years – the length of the mission. If we were no closer to finding a way home, I’d let him go. I could give us five years. Apparently, Grant couldn’t. Not even a year.”

“Yet, you came home a week before your five-year mission was up. I told him he was an idiot.”

She nodded to herself. “Just as well. Despite everything, I love command. I don’t think I would have given it up.”

She met Jeb’s gaze. “Tell me: Is he happy? Did he marry that Derulian?”

“Yeah. They have two kids.”

“Good. I don’t think we’d have made it through the stress of my command under a normal tour. And now, after all I’ve been through… But what about you? How are you holding up after losing Loreli?”

He blinked at the change of subject, but the news of the morning filled his heart with cautious optimism. “She might be alive, after all.”

He grabbed her arm and gently pulled her back down. “Hold on, there! I thought I was the captain of the Impulsive. We’re not ready to act yet.”

Her eyes flashed. “You know I loved that sprout like she was my own child. If there’s any way I or my ship can help, we’re in.”

“I know,” he said, gratitude and warmth flowing in his voice. He couldn’t help thinking how fun it would be to go on a mission together, too. The Cybers wouldn’t know what hit them. “Right now, all we have is a cryptic warning from a malfunctioning janbot. My people are working out if it’s even possible, and if so, where we can find her and how we can get her back.”

“If you need anything, we’re at your disposal,” she said.

He was still touching her arm. She set her hand over his. “Promise me.”

He’d forgotten how deeply blue her eyes were. “I promise.”

They fell silent then, both too full of things they wanted to say, none of them seeming to be right for a smooth transition in the conversation.

Then she started to trace lazy circles on the back of his hand with her finger. It sent tingles up his arm, more heady than the wine he hadn’t drunk.

“So,” he drawled, “what kind of dinner were you thinking, then? Should I go back and get my hat?”

She smiled, her gaze still on his hand, her fingers moving meditatively. “I’m tempted. I have been since we saw each other yesterday. But… I need a friend. Someone who understands me and my position, and that I can talk to, captain-to-captain. I think maybe you could use one, too? Maybe we should play it by ear. What?”

She looked up as he sucked in a breath.

He grimaced. “Sorry. Just an unfortunate choice of words, considering what my ship has been through with the Cybersong virus.”

She snickered, and then they were both laughing. “I’m sorry! Yes, that must have been torture for you. You’re as tone-deaf as I am!”

He wagged a finger at her. “Ah, but now I have the advantage. I’ve had two weeks of having my brain rewired.”

“I didn’t say that, exactly. But I might just be able to play it by ear for a while.”

He threaded his fingers between hers. “And no matter where this leads, I’ve always been and will always be your friend.”

They spent the night talking, snacking, drinking. They named the katt, “Claws III” or “Tre” for short. Five years of hardships and joys, regrets and reassurances… They barely scratched the surface of it all, but it was enough.

And when the clock called them back to their respective ships, Jeb reached out and caressed her hair, and when she seemed fine with that, he kissed her.

Years ago, I had read a tip from a guy who wrote a dating advice book for men. He said if you weren’t sure a woman wanted to be kissed, caress her hair first. I always liked that advice. I’m a happily married woman always up for kisses from my man, but when I was dating, I think this would have been a good strategy.