ST:HMB Phantom of the Cybersphere, Part 13 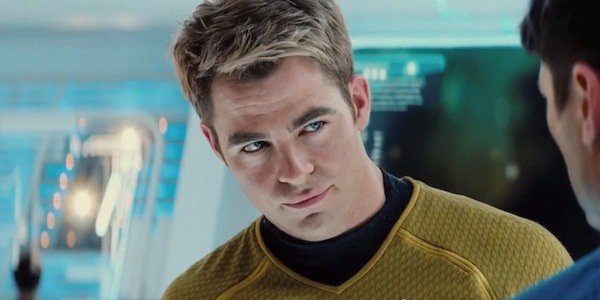 Think we can get Chris Pine as Ellie’s Love Interest?

Finally! We’ve eradicated the Cybersong virus! It was truly a team effort. While Ensign Doall and Lieutenant Lumier kept the Janbot distracted, Lieutenants Perez and LaFuentes were able to flank the coding from within Doall’s mind while Perez’s team attacked from without. Meanwhile, the doctor eradicated all the nanites in your Doall’s brain and Security took out all the sanitation bots on the ship. On the downside, everyone has to do cleanup duty until we get the Impulsive thoroughly cleared and replace the janbots.

It felt good to be in a mess hall filled with talk and not song, even if the chatter comprised of tired complaints about clean-up duty.

Leslie had just finished griping about her nails and was cleaning under them with a blade she’d made from a piece of janbot she’d destroyed. “I’m getting (manicurist name) to paint them later. I think I’ll get titanium infusion this time, at least until we’re done with cleanup. They’re so weak from the solvents. Did anyone figure out how to get phaser scoring off the bulkheads?”

“No,” griped Gel. “I asked Pulsie, and he said, “‘You made this mess, you figure it out. Why don’t you slather yourself on the wall?’ Slather, really? I don’t slather.”

“That’s not what she said,” LeRoy quipped.

Leslie smacked him, but Gel’s color turned slightly bluer. If anyone asked the universal translator, it would have told them that this implied that LeRoy was not wrong, and the Gel was somewhat embarrassed and proud of it.

Suddenly, someone yelped from the other end of the mess hall, accompanied by the clatter of a tray.

This time, he didn’t even make a statement of ennui before disappearing again. The minion whose lunch he’d ruined gave a howl of frustration – after all, someone had to clean it up – and bent down to sop up the mashed yams and sloppy Joe.

They returned to their own meals.

“What I don’t get is how the Cyber virus was able to do so much with the Janbots,” said Leslie. “Granted, they have access to everything, but I thought their programming capacity was limited. I mean, they just clean stuff. That doesn’t take a lot of processing power.”

“They used one janbot as a hub,” Ellie answered, “and that Janbot – my Janbot – was always different. He reacted to positive reinforcement.”

“True,” LeRoy said. “I thanked it for cleaning up some chicken grease from my chair, and the next day, I found extra napkins in my cupboard.”

“I got flowers and chocolates,” Ellie muttered. She felt sudden tears. She buried her face in her hands to hide them. “Stupid Cybers. I’m sorry.”

Her friends scooted to surround her, enveloping her in love. Leslie said, “No need to apologize. We’ve had so much happen to us – and you, even more. It’s okay to cry about your little friend.”

“Especially since he was such a cassanobot,” LeRoy teased, making her chuckle.

Ellie looked up and gulped. Raoul stood in the doorway, searching the crowd. Hastily, she wiped her eyes on her sleeve. Gel handed her a napkin, and while she blew her nose, he set two pseudopods over her eyes. They were cool and soothing.

Gel said, “I got hidden talents. Don’t say it, Jenkins.”

By the time Raoul caught sight of her, her eyes were dry and hardly red, and she’d smoothed her hair. Her friends had returned to their seats, Leslie and LeRoy both cleaning their nails with knives.

Raoul gave them all a nervous smile. “Hi, everyone. Um… Ellie, can I talk to you for a sec?”

Her friends looked at her. Ellie felt her heart warm in a way it never did around Raoul. “Guys?”

Leslie gave a theatrical sigh and put her knife in the holster next to her sidearm. “We probably should get back to work. If our Fearless Leader sees us lollygagging, he’ll probably set us to cleaning the hull.” She winked at Ellie as she stood, then broke into song.

LESLIE
I like to be in the Hu-man Fleet
Real men, I meet here in HuFleet.
If they liked what they see in Union Fleet…

Gel put a friendly pseudopod around Ellie’s shoulder and finished: They would act more like me in the Union Fleet.*

They left the mess hall swapping high fives and clapping in rhythm. Ellie chuckled. Their performance had everything to do with teasing and comradery than viruses and compulsion.

Raoul took one of the vacated seats. “Um… What was that all about?”

Really? Had he always been so slow to take a hint? “So…ready to go?”

“Almost.” He bit his lip and gazed deeply into her eyes. “Ellie, what you said in the Cybersong world… I always wanted us to be more … You know that, right?”

She let her gaze rest on the table, where his hand had stretched toward hers, almost but not quite touching. How many times on the Mary Sue, even when they were supposedly dating and the crew had them “totally ‘shipped” did she have to reach out to cover the distance?

Every time. The thought tired her. There were times when she didn’t want to be Ellie Do-It-All.

She pulled her hand back and set it in her lap. “Different fleets aside, I don’t think it would work between us. I really do wish you all the best.”

“And that’s why I loved you. I’m a different person now, Raoul. I need a different kind of man.” And I’m too much for you, too, anyway.

She patted his shoulder as she left.

She passed Enigo just before the exit.

“You did good, Doall,” he murmured as he continued without stopping to the replicators.

She also continued her way without stopping, without even stopping to wonder what he meant. It was enough that she knew he was right.

*If you don’t get this joke or the innuendo that preceded it, then you need to read Amock Time, found exclusively in Space Traipse: Hold My Beer, Season 2, now available from Amazon.