When last we left, the combined crews of the Inconceivable and the Impulsive had tried to explain the human concept of scientific inquiry to the First Officer of the Logic ship Rational Plausibility, and only succeeded in convincing him that the entire race was quite mad. 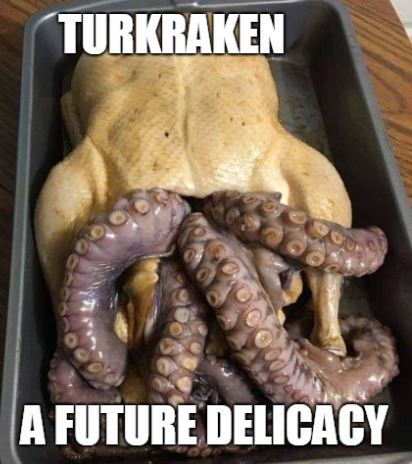 At this point, Captain Tiberius decided it was time to change the subject. “So, philosophy aside, how exactly is this experiment going to run? Not that I want to influence the results, but how can we be sure we aren’t sucked into a black hole?”

“That’ll be a no-brainer,” Grant said as he reached toward the table and grabbed a bottle of ItsGreen and refilled both his glass and Commander Deary’s. At the table itself, Chef had just set out the main course of the evening – a turkraken, a hideous yet oddly tasty mix of a turkey and a squid. Enigo was explaining the concept to Loreli as she eyed the food dubiously.

“I…am not sure those words belong together,” the Logic science officer Fle’ek said, and Jeb had to agree with him.

Deary tried to explain, but Doall asserted that he was simply stringing unrelated words together again, to which Deary replied, “Och, that’s how it goes with acronyms sometimes. Suffice to say, without that handy little device to apply adaptive interferometry for measuring the nucleosyntheses, we could be in big trouble before anything’s registered on our sensors. But dinna you worry. We’ve got everything under control.”

At that moment, there were shouts as the turkraken suddenly gathered its tentacles and launched itself straight at Enigo. Before the chief of security could react, it had wrapped itself around his face. Loreli grabbed it by the roasted wings and pulled, but it freed one tentacle to slap her, and she fell back. Ensign Gel whipped out a tentacle of his own and caught her before she fell into the Ridelian sweet puffs.

One of the Inconceivable officers dashed in in a second attempt to free Enigo from the culinary fright and was also slapped away. He went crashing into the espresso bar. He screamed as hot steam seared his arms and hands.

Four members of security pulled out their phasers and stunned both culinary creature and their superior officer. Enigo dropped unconscious to the ground, and the turkraken, still possessing whatever counted for consciousness in a main course, started to scurry away, only to be phased until it stopped, shook and exploded.

There was silence and the smell of roasted meat.

“Another result of ‘science’?” The Logic First Officer asked as he peeled a singed tentacle off his cheek.

“Baking is science; cooking is art,” Doall said as she presented him a bowl to drop his piece into. “Even so, with your permission, Captain, I’ll get this to the science lab so we can figure out what’s going on. This doesn’t normally happen with food,” she added to Fle’ek.

The two gathered some pieces and exited together, talking animatedly.

Meanwhile, Sickbay personnel had arrived and were putting Enigo and the Inconceivable officer on stretchers while one lucky tech examined the sucker-shaped bruises on Loreli’s otherwise perfect cheek. As they exited, a trio of janbots snuck in the open door

“Good job, everyone,” Gel said to the security team. “The Boss is going to be so proud of you all.”

(Of course, you know Enigo will be. If you don’t remember (or know) why, check out this vignette in “A Day in the Life.”)