J.R.’s life depends on Dour’s knowledge of arcane teleporter physics. Can Dour do the math? Let’s find out!

Don’t know what’s going on? Go here to catch up. 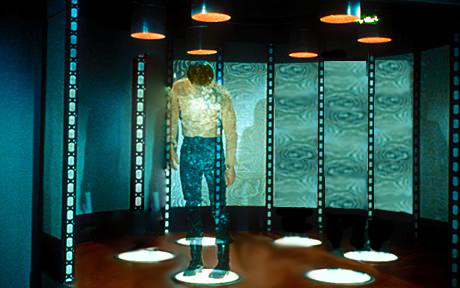 Twenty-seven minutes after Dour’s instructions were given, Captain Tiberius led a small group to Teleporter Room Four. The doctor and Bobby carried J.R., who had been dosed with enough sedatives to put an Orion bloodbeast into a coma. The doctor was counting on it lasting about 10 minutes. Just in case, however, LaFuentes followed with his phaser set on maximum stun. Loreli and Minion O’Tin followed, just in case J.R. gained control of his psychic abilities.

The door slid open to a dim chamber that smelled of antiseptic and paraffin. The transporter pad was lost in shadows, the console illuminated by candles that lined the back edge. Two were held by black-robed women. The cowls obscured their faces. Dour’s own cowl rested on his neck. His fingers danced across the console.

“Why’s it so dark in here?” Enigo asked.

Dour did not look as he said, “There can be no active devices in this room save the teleporter itself. Nothing can interfere with my mistress’s perception of the matter stream. All devices must be left outside the room. That includes insignia – and, yes, Lieutenant LaFuentes, your phaser.”

Minion Werl, similarly robed, approached them, an open box in his hands. With a shrug, the captain pulled off his insignia and dropped it in. The others followed suit with their own devices, but LaFuentes hesitated.

“Once the teleportation process has begun, he will be helpless to act. Before then, we shall rely on your weirdly effective defense capabilities.”

“Hand-to-hand combat by candlelight? Why not?” He dropped his phaser into the box. Werl bowed, closed the lid, placed the box outside the door. Then he locked it from the inside.

Now, Chief Dour looked up – slowly, theatrically. He made a small motion with his hands and the women hastened to put the candles closer so they illuminated his face.

“What you are about to witness has been attempted only a handful of times in teleportation history, and never under such extreme conditions,” he intoned as if reciting a ceremonial text rather than voicing a warning. “The procedures are delicate; the union between my mistress and myself must be total and uninterrupted. There shall be no movement, no speech. If you must hum, then harmonize in a minor key and maintain no more than eight tones.

With deliberate slowness, he raised his hand, a single pale finger pointed from the wide black sleeves. “Place the victim on Pad Two. He must remain standing. I will tell you when to release him.”

Bobby and the doctor did as ordered, balancing him upright, and holding him up by a hand each as they backed off the pad themselves. By a miracle, J.R. remained up.

J.R. not only remained standing, but his head snapped up and his mouth opened to yell.

The candle bearers facing the transporter started to scream a warning.

“Silence!” Dour thundered, and at that moment, J.R. was caught up in the teleporter beam. He tried to reach though, and in fact, the beam seemed to waver. The sparkle lasted unusually long, and its light cast weird highlights and shadows on the walls.

Enigo clenched his fists and traded a look at his security officer, who tenses (or in Gel’s case, solidified slightly) to show he was ready to spring into action if J.R. somehow escaped containment. Otherwise, no one spoke and no one moved, except to look from J.R. who writhed and shouted silently in the field, and Dour whose hands handled the controls of the teleporter console, making minor adjustments that were intuitive as much as deductive.

Then, the light faded, the beam ended, and the teleporter pad was empty.

One of the candle bearers gasped softly; the other turned her head. Her cowl slipped revealing a tiara over blond hair; it was one of the women who had come aboard with Dour.

Dour spoke, calling her attention and everyone else’s back to him. “My mistress has taken him into her embrace. She calls him to his former self. She dictates the manner of his form. Now, let us see if he was strong enough to do her bidding.”

His hands caressed the console, then took a sudden, strong hold of the control paddles. The candle bearers gave a different kind of gasp. He eased the controls forward. Again, the teleporter sparkled, but this time, it was the steady, familiar pattern of teleportation. When it ended, J.R. slightly younger and less buff, stood on the pad.

“What the..?” He started, then his knees buckled.

“Jimmy Ray!” Bobby dashed toward him, closely followed by the doctor. Both reared back when they got within smelling distance of his breath.

Dour said to his subordinate. “Present to him…The Mint.”

Werl stepped forward, holding a pillow on which was a silver wrapped candy. He knelt before J.R. and handed up the pillow, keeping his head ducked both in respect of the reborn and to minimize exposure to his exhales.

“Uh, thank you?” J.R. took the mint, unwrapped it with shaking hands and popped it into his mouth. He returned the wrapper to the pillow. He winced at the potent minty coolness. “Bobby, where are we? Why’s it so dark in here and why are BiBi and GiGi holding candles?”

Bobby laughed. “Come on, brother. We’ve got a lot of explaining.”

Together, he and Dr. Pasteur helped him up. He staggered slightly, but they held him steady as they led him to Sickbay, Bobby explaining about the ship. As they passed by Captain Tiberius, he gave a small shake of his head. Better to get J.R. to sickbay and checked out before a lot of introductions were made.

Instead, he went to his teleporter chief, who was now running a diagnostic. “Damn fine work, Dour.”

Dour peered at him through hooded brows. “I do not know yet the consequences of this ceremony. There are many reasons it is not done, and only a few  concern the victim.”

“We’ll cross that bridge when we get to it. For now, we’ll put this room off limits until you give the All-Clear. In the meantime, why don’t you enjoy yourself?” He glanced from one candle bearer to the other, then back to Dour.

Dour, however, barely looked up. “My mistress needs me now. Go, you are free.” He raised one hand to wave a dismissal.

The blonde whispered, “I would stay and learn at your feet, Master,” but the other blew out her candle and her robe, leaving both on the floor.

“Well, you have fun, BiBi. I’ll see y’all later.” She sauntered out of the room, then picked up the pace until she caught up with Enigo, who with Loreli and Gel, were trailing behind J.R. and his escort, just in case.

“Hey, handsome,” she said as she got close to Enigo. “I take it you’re in charge of security? You wouldn’t have really shot J.R., would you?”

“To save the human race? You bet I would, and sleep good that night, too.”

“That’s hardcore. I’m GiGi.” She made to slip her arm through his, but Loreli pushed her hand away and skillfully slid between them.

“He recently experienced trauma to his side,” she explained smoothly, but not smoothly enough that Enigo didn’t falter in surprise.

“Uh, yeah, and I gotta work, anyway. Loreli, you okay escorting GiGi to the teleporter room so she can get back to the party? Gel and I got this.”

Loreli slid her hand through the woman’s arm and led her to a side corridor. GiGi hesitated and scowled, but true to Loreli’s talent and training, they were chatting like new friends before they turned the corner.

Enigo and Gel continued following the others to Sickbay.

“What was that about?” Gel asked.

Enigo shrugged, then regretted it. Loreli was right; his side did still hurt, but he didn’t think that was her concern.