My apologies for missing April 11. I could have sworn I had an installment all set up. I am going to plead to the court that my brain was addled by job hunting stress, but now I am all better! April 30, I start an exciting new job as the marketing communications specialist for Newscycle. I’ll be writing copy for various aspects of publicity for the company, which makes terrific software for streamlining production of and monetizing publications in print and digital, as well as braodcast. I still stop now and then just to squee, I’m so excited. It’s not as good as getting a commission to the Impulsive, but it is safer. Though, come to think of it, no one has died on the Impulsive. 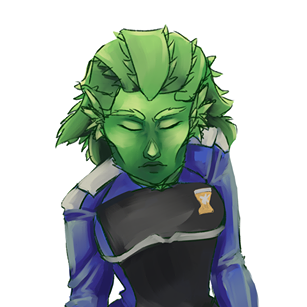 At Sickbay, one of the nurses prepared a backpack with scanning equipment. To be more precise, the backpack was the scanner, with a handheld device connected wirelessly to the main console. It was portable and allowed the doctor or medical technician to run a complete set of scans for analysis.

Actually, anyone could run the scans. It’s not hard to wave a flashy light tube over a person. However, most people felt weird about the average joe invading their personal bubble, except when that “joe” was in medical or security. Thus, in a feat of standardization that could only happen in a bright and most-likely impossible future, all scanner wands worked the same way, whatever data it recorded.

Every doctor and security officer in HuFleet had to take a three-week course in scanner wand waving. Enigo had then further honed his skills during a six-week stint at HuFleet HQ scanning visitors for nanoexplosives and surveillance devices. While it had been a punishment for starting a bar fight, it nonetheless made him one of the most qualified people on the Impulsive to run medical scanner.

It also meant he got to carry the backpack.

Loreli grinned as he grumbled about not being able to do his job protecting them if he had to protect the equipment on his back. “When we get to the teleporter room, I’ll don the pack.”

Enigo grinned at her. “Then the doctor will have to do the chivalrous thing and take it from you. I like your conniving mind, Fronds.”

Loreli had the computer explain chivalry to Chi Nikki Chawa as they made their way to the teleporter room. It didn’t take long. Apparently, their people had a similar concept. “Though, it’s usually a prelude to courting.”

“The doctor is not courting me,” Loreli said. “No one on the Impulsive is. It would require special dispensation from the Captain for me, as a ship’s sexy, to have a romance.”

“My work is important to me,” Loreli answered, “and my kind, Botanicals are able to absorb the admiration of others to sustain our emotional health, much as we absorb sunlight.”

“Do you get a lot of sunlight living on the ship?” Chi Nikki Chawa looked at the mild, recessed lighting of the hallway with skepticism.

“The artificial lights are designed to mimic the UV range of Earth’s sun. It is sufficient. Still, nothing compares to the power of summer’s day.”

“You could say the same about love,” Chi Nikki Chawa said, and Enigo shrugged to show he agreed.

When they got to the teleporter room, the door would not open.

“Go to Minion Barnes at the engineering teleporter,” Dour said through the intercom. “My mistress requires privacy.”

“Speaking of love…” Chi Nikki Chawa started, but Enigo cut him off.

“It’s not like that. His ‘mistress,’ is the teleporter, and it’s like a slave/acolyte thing. Bizarro. He’s probably still doing that freaky ritual of his.”

“I’ll bet he stopped to write some poetry or a tragic, depressing song. Next talent night is going to be a hoot,” Enigo concluded. His frown and roll of his eyes said what he thought about Dour’s idea of entertainment.

Chi Nikki Chawa shook his head. “Despite my evolved intellect and the assistance of your ship’s translators, I am still not sure I understand.”

“Don’t worry about it. Nobody understands Dour. He likes it that way.”

In the transporter room, Teleporter Chief Dolfrick Dour had indeed finished his poem and his “freaky ritual,” but was pondering the portents his mistress had laid before him. Today, he had destroyed and rebuilt the physical vessels of four souls: an alien, a human woman, and two human brothers…

Two brothers, at least. He wasn’t quite sure one was fully human.

So far, all the comments I’ve been getting are spam. Is anyone reading this? If so, please give me a yep in the comments or on the FB page, just so I know if this is worth bothering with. i’ve been having a ton of fun, but with the new job, it would help to know that folks are still interested in weekly adventures of the crew.