Welcome to the exciting conclusion of Polarity Panic. If you missed an installment, find the links here. In our last exciting installment, Commander Deary was going to save the Graptarian ship by reversing the polarity of the magnetic containment field – quite a trick of engineering since the Graptarian ship doesn’t have a magnetic containment field. Will he save the day? (Spoilers – of course! How else can I keep writing these. The fun is in how. Read on.)

In the debate of whether Angus Deary was an idiot savant or just an idiot, Meh chose idiot. He reached for the Impulsive’s engineer’s hands, somehow managing to miss. “Stop it! You can’t do that. It doesn’t even make sense.”

Deary paused long enough to bat his hands away. “It’s called improvising. I got this, just hold my beer.”

“It means step back and relax. I got this. Morange, ready?”

“Warning: Warp core breach in three minutes, fifteen seconds. Please hang onto your butts and prepare to approach the Great Crack in the Sky.”

The alien captain sighed. “Meh, just leave him. It no longer matters. Capt. Tiberius, it grieves me that you would sacrifice your ship and all your crew to save us. Maybe if you beamed here, you could beam us all back now?”

“Sure, we’ve got some time. Away team to Impulsive teleporter room. Get a lock on all the life forms in this room and be ready to zap us out on my command.”

“My mistress does not know you.”

“Well, get on it! Captain out. I’m sorry, Ke. That’s my teleporter chief’s fancy way of saying he can’t get a lock. But I’m sure Commander Deary will have this done in a jiff.”

Sparks flew from the console, and Morange was tossed back. With a yelp of surprise (and perhaps a bit of joy about being useful in this final scene), the doctor rushed to his side. He ran the scanner over him and said grimly, “He’s dead, Jeb. Fortunately, his species can handle death temporarily. I can stabilize his molecular makeup with 65cc’s of Imposazine, but we have to get him to a resuscitation chamber in the next four minutes or he’s unrevivably dead for sure.”

“Anytime, Mr. Dour,” the captain said over the communicator.

Smythe moved to take Morange’s place while Lt. LaFuentes helped the doctor drag the body of Morange out of the way.

Jeb grinned and shook his head. “I knew you-all were a spiritual peo—whoa! Hey, that’s my buttock you’re grabbing!”

The Graptarian captain said, “It’s our way. Keptar, seat of all that comes and goes…”

“Smythe, connect the yellow one. Good. I think I’ve almost got it. What’s this button do?”

The air circulation system suddenly reversed. People’s hair pulled toward the ceiling and folks staggered as they fought to keep their hands tightly clamped to their cheeks.

The aliens chorused,”…and guide us past the bladder of purification and on to…”

Deary shouted, “Got it! Plug in the blue one!”

Smythe did so with only a minimal amount of sparking. It was if his British heritage had affected the very wires, preventing them from any garish displays of pyrotechnics.

The engines ceased making a whine like a distressed TARDIS with the emergency break on. The lights went from warm yellow to a bright florescent white. The computer said, “Warp core has been stabilized. Keptar has heard your pleas. Praise Keptar, whose mercy is sweet but whose wrath is silent but deadly.”

Meh unclenched and looked over the console. “I… I don’t understand… What have you done?”

“Like I said. I reversed the polarity of the magnetic containment field.”

“But we don’t have a magnetic containment field.”

Deary smirked. “You do now. Do you want me to get rid of it?

“No!” every alien and even the computer shouted.

The communicators chirped. Doall’s voice spoke cheerily, “Captain, subspace has stabilized. Is everyone all right?”

“Ensign, I told you to get that ship out of here.” Although he spoke sternly, Captain Tiberius winked at Ke.

“Oh, I know. I was going to, but the bridge crew refused to go until the one minute mark and by then Cruz was telling a story and you know how he talks with his hands.”

“Ah, We have to do something about that. At any rate, it’s a good thing you stayed. All’s well that ends well. Have we got transporter lock? Good. First, beam the doctor and Morange straight to sickbay. Don’t worry; he’s just mostly dead. Then teleport over an engineering team – and make sure they bring some magnets with them. We’ve got a lot we can teach our new friends and a lot we can learn from them, too.”

As the small engineering crew started to clean up the mess, Captain Tiberius put a friendly arm around the Graptarian captain’s shoulders and like two friends who’d known each other forever, they walked out of the engine room. The door closed as Ke was saying how Jeb had the right tush for worship – firm, yet squeezable. 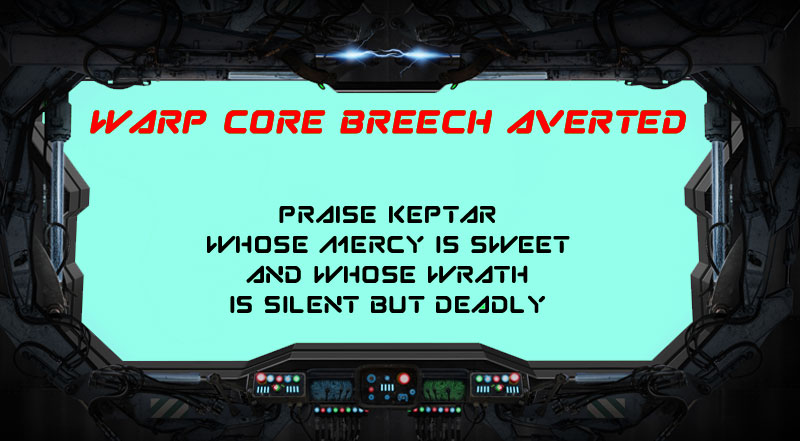 After two days of working with and learning from our new alien friends, we are leaving them and continuing on our mission. It’s been a wonderful experience. Deary got to teach a new crew a thing or two about warp engine technology. Doall has taken her inability to get Cruz to stop waving his arms and steer the ship as a sign that she’s not ready for the Diplomatic Corps. Morange recovered, and feeling he’s learned everything he needs to know about humanity, has requested to return to the Heptite Corps ASAP. The doctor came to the bridge to share a cameo and a joke, but we were all pretty busy.

For me, however, this mission has been a life changer. Never have I felt so close to the divine. I don’t think it was the near brush with death. Not like I haven’t been there before! But the spirituality of the Graptarian people, even in the crisis, moved me. In the past two days, I’ve seen it expressed in their routine activities, too. Never have I been goosed so often or with such love. I think…I think I may have found a religion I can embrace.

The captain ended his log. He looked around his quarters, dimmed for the night. The Graptarian ship hung outside his window. As he watched, the drives cycled in the saucer-like vessel and it disappeared. He raised a beer to it and wished them farewell.

Then he set down his glass, grabbed his behind with both hands and said, “Great Keptar…”

Thanks for sticking around, and so glad none of you died. Although if anyone does die, I hope its dying laughing. I’m working on Episode 3, but in the meantime, check out my Facebook page, and sign up for the RSS feed to get notified of future episodes.