Are you ready to rumble? If you want to see the inspiration, check out this video: https://www.youtube.com/watch?v=AmWLaFQNwVE. If you need to catch up, find the scene list here. Finally, if you want to have some fun, cue up this song. Get past any YouTube commercials. When the power comes on (and you see the red text), hit it!

The Impulsive had five minutes of down time – literally and cinematically – to prepare a “rip-roaring surprise” for when the Cybers found them hiding in the wreckage of the Kandor ship. Now, I could start today with a scene of them meeting in the briefing room to discuss strategy in creating the perfect plan.

But come on! Even in this century, we have remote communications and project management software. You really think people are going to leave their duty stations and traipse up to the bridge just to talk and do show-and-tell? Let’s jump to the fun, shall we? 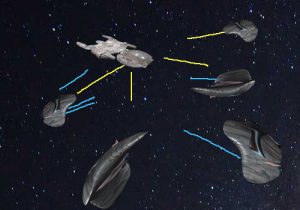 Captain Tiberius leaned forward in his chair, concentrating on the viewscreen, which now showed the Impulsive in the center of a field of debris. With only the ship’s passive detection systems operating in order to keep hidden from the Cyber ships the locations were approximated by previous known locations and movement. Red blips showed the Cyber ships as they moved toward the wreckage, first a few, then more as other possible locations were dismissed.

“They’re starting to poke around, Captain,” Doall said as her console picked up the Cybers’ active systems feeling out the field.

Smythe glanced at his console. “Wikadas shield online and formations programmed in.”

Doall added, “Jamming ready. I have a new selection: Classic Twentieth Century Metal. That should confuse them. They are entering the debris field.”

Tiberius leaned back and pressed the intercom. “All hands, this is the Captain. Time to make trouble. Mr. Smythe? Beer me.”

“All hands. Silent Red.” Smythe ordered. In response, the lights dimmed to red and brightened three times to signal the alert and for dramatic effect.

The power came on, all systems coming alive in a rush. The intercom blasted with a man’s maniacal laughter. In the bullpen, the second shift cheered.

The screen shifted to a completely accurate representation of the ships and debris locations just in time to register multiple explosions as Doall’s musical choice caused some of the Cyber ships to veer into pieces of the Kandor ship.

The deflector shields powered up in a programmed expansion that started close to the ship then pushed outward. Debris, mechanical and biological was shoved away from the Impulsive at high velocity and rammed into the approaching swarm. As the swarm jinked and dodged to avoid collision, LaFuentes and his weapons team followed up by blasting Cybers and debris alike to increase the confusion.

The defector shield energies warped until they formed a blade with a horizontal edge that paralleled the width of the ship. The engines engaged and just as the singer began to sing of locomotion and insanity, the HMB Impulsive burst from its hiding place, plowing through debris and ships, phasers striking from every turret.”

“Kill them all or make them run,” Tiberius ordered.

The Impulsive swooped in and out of the fray, scattering space junk, ships and ships that became space junk like a Fibaltian dragonhawk terrorizing a flock of hummingsparrow.

“Brace!” Cruz called as he entered the thickest part of the swarm. Across the ship people grabbed consoles or the arms of their chairs.

Just before they’d break through the swarm, Cruz kicked the ship into reverse. (Heck, yeah, reverse! The Impulsive has reverse drive – impulse and warp. As Deary’s father, Montgomery Angus Deary used to say, “U-turns in space are for people who don’t understand engineering.”)

The ship jerked with whiplash-inducing suddenness the inertial dampners could not compensate for. The Impulsive cut back through the swarm.

Just like the alien bird mentioned earlier to remind you this is space opera, the ship twisted and dove through the smaller but plentiful enemy ships. Unlike the birds, the Impulsive and the Cybers fired phasers and launched torpedoes. The Cybers tried to form into a swarm for a coordinated attack, but as Deary and LaFuentes predicted, their best efforts bounded off the shields at angles, sometimes continuing on their new trajectories to hit their own ships. Doall reported the drain, but it was a fraction of the damage they’d been sustaining earlier. LaFuentes whooped.

Tiberius grinned, imagining the next time he was on earth at the Captain’s conference. “Take that, Union Fleet.”

The band on the intercom moved to another guitar solo. In the bullpen, the second-string team played air guitars.

On the screen, they saw the Cyber ships breaking away, retreating to a safer distance and gathering into a new formation, latching together like giant, evil, Cybernetic Space Legos. A few remained behind to provide cover for the retreat, and the Impulsive’s weapons team made sure they paid a dear price for it. Even so, enough survived that they could complete their intended form.

As the new configuration started to become clear, Jeb swore. “Doall, jam them!”

“The jam is on all frequencies, sir – even FM. Kind of sounded better that way, too. But it’s not working anymore. This must have been a programmed failsafe.”

“See how they connect, then move?” Loreli added, because her job is to study alien behavior and because she hasn’t been mentioned yet this scene. “They’re getting commands through physical contact. I’ve made a note for HuFleet and the Union tacticians.”

The last of the Cyber ships broke off to join the rest, which had formed themselves into a large wedge.

“Captain?” Cruz asked. He’d slowed the ship and it hovered, ready to attack or run.

As if sensing his thoughts, Doall said, “The formation contains 57.8 percent of the original hive. Still enough to integrate the entire system. Our shields are holding at 87 percent.”

Tiberius narrowed his eyes at the screen. The tiny camera by the viewscreen focused on his determined expression for its visual report and potential intraship memes.

I didn’t want to break the tension, but if anyone read “bird” and “torpedoes” and snickered, that would be fine. I thought about it, myself.

Next week, we continue the bird analogies with Interstellar Chicken! What’s a good song for that? Share your ideas in the comments or on the Facebook page. If you aren’t getting reminders and want to, sign up for the feed. Also, let me know if you want my monthly newsletter. Thanks for joining me on this crazy train.