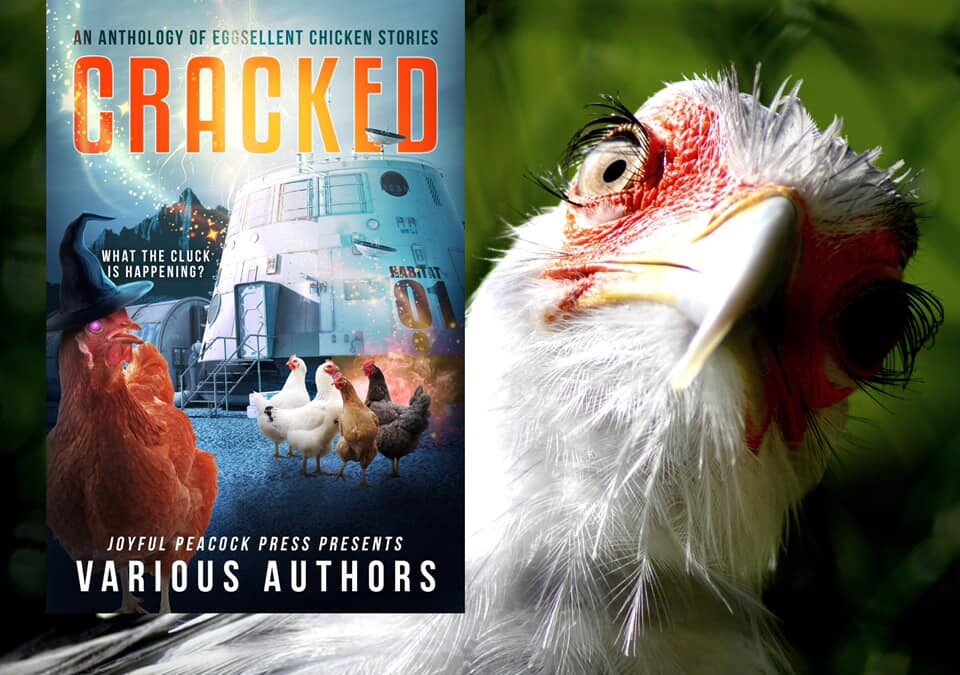 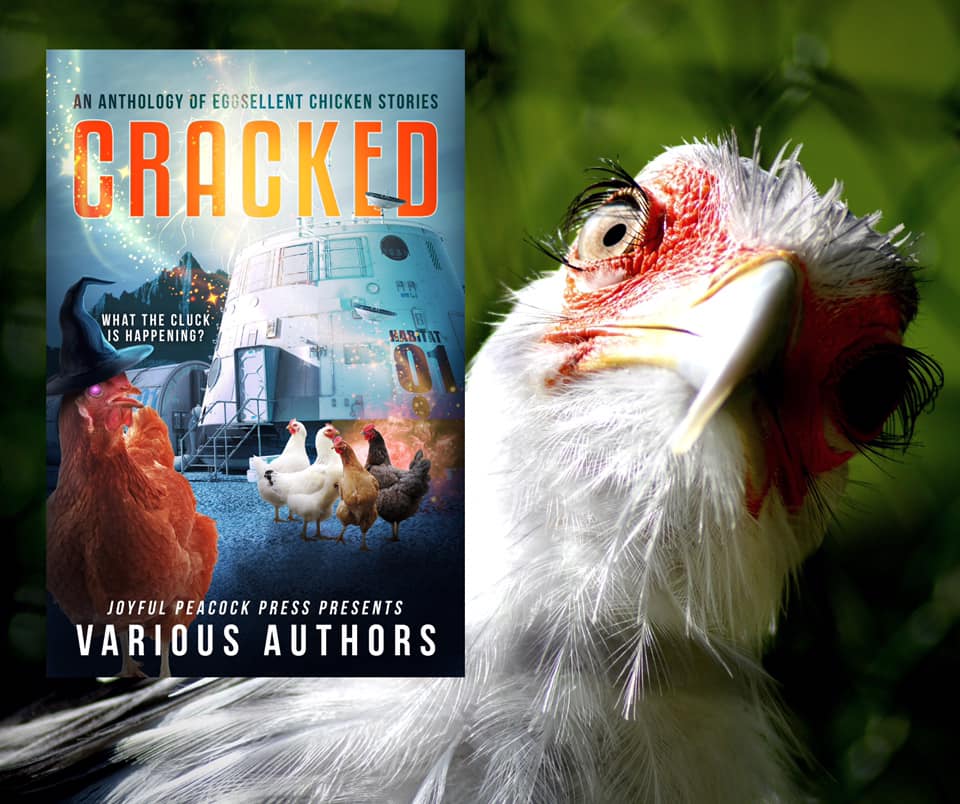 But what happens when authors have too much free time on their hands?

Craft a story featuring our favorite feathered raptors: the CHICKEN.

Twenty authors deliver in some unexpected ways and live to crow about it. From chickens in space to cozy murder mystery farmyards to schools of magickal thought…
Includes guardian angels, chicken shifters, aliens, and feathered matchmakers, maybe even a non-fiction adventure or two… and more! These amazing chickens come from the minds of twenty cooped-up authors on the edge of cracking…

Excerpt from my story, “MotherClucker”

Minion Basic LeRoy Jenkins stood at ramrod attention inside the office of what looked like a 20th-century Midwestern farmhouse. Of course, it was made with alien materials using 24th-century technology, but over the centuries human tastes had evolved and devolved, and country chic was back in vogue among colonists.

Governor Farrugia sat at the desk and frowned grimly at LeRoy’s human captain and Logic first officer as he summarized what Choquette would have read in the situation reports but the readers have not. “The situation is dire, Captain. About three months ago, we opened up a new coop. The area was rich with sorghum beetles, the weather mild…perfect for laying hens.”

The captain nodded. “Yes, we’re aware of that. The first shipments of eggs were heralded as the ambrosia of breakfast. Food critics were going wild.”

“Exactly! The profits over the next year would have allowed us to colonize the northern continent, but disaster struck. First, it was little things. A broken fence, a scratched-out piece of lawn. Then one of our best hens started screaming in the night, then another the next night. Finally, three weeks ago, they all stopped laying.

“We figured something was coming by at night, scaring the hens, though none of them were hurt. Still, we had contracts to fill. So, we put out guards.”

He sighed, then moved aside a ceramic rooster to turn his console so Choquette could see the screen. “This is Calusian Brown, one of my best breeders.”

The screen held the image of a dead man with foot-long gashes that tore not just across but into his body so that guts hung out. In among the furrows were large, irregular holes.

Captain Choquette leaned forward, the doily in his chair slipping to the seat. “Sacre poulet! Did anyone see what did this?”

On cue, the door opened, and a man stepped through. “I have. A glimpse, anyway. It was cloudy, and as you know, Pullet VI doesn’t have a moon. It was big and feathery. The creature, I mean. I shot it.”

“You mean you shot at it,” Kun’pau, the Logic first officer, corrected. He was good at that.

But the newcomer only rolled his eyes and held out his phaser. “No, I shot it. With this. Didn’t even slow it down. So, we’ve made our report. Production’s shut down. The rooster is stress-molting. If the Union wants Pullet Grade As, you’re going to have to do something about it.”

The newcomer sneered back. “You HuFleet types think you’re so tough, don’t you? Starships, phaser banks. You can’t use a starship phaser to kill something in the forest. That’s where the sorghum beetles breed.”

LeRoy was ready to rush forward and deck the colonist for his impertinence, but the captain merely shrugged. “I don’t think it will come to that. I’ll start assigning security teams with heavier weaponry and we’ll scour the woods for your oiseau effrayé.”

“Oh, no,” Governor Farrugia said. “We’re calling it a Calusian Brown. Cal always wanted a new breed named after him.”

As they stood to go, Kun’pau paused to pick up an egg-shaped object from a metal pail on a shelf. “What is this?”

Farrugia shrugged. “A rock. It’s the strangest thing; the beetles move them around. My wife collects them. We have bucketloads all over the house. They’re weirdly uniform. She and some of the ladies are thinking about making them into things. People, bunnies, fat little starships. Want one?”

“That won’t be necessary.” He set it down