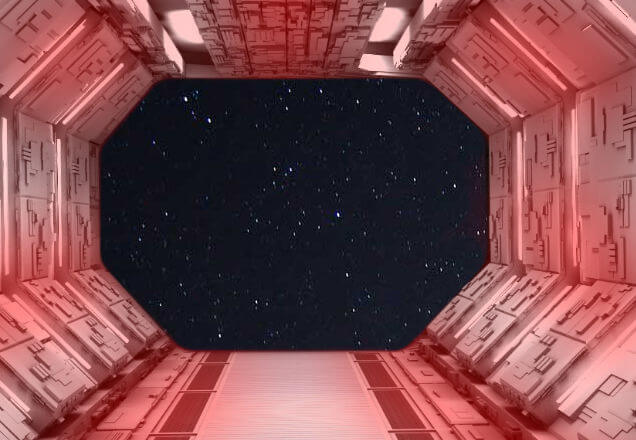 So, this scene made me cry a little. 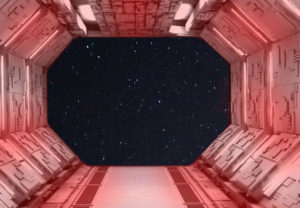 While Enigo’s dinner was more talk than food, Gloria’s and Dolfrick’s was just the opposite. Of course, that didn’t mean a lot wasn’t being said. Each small frown, the cast-off gaze, the heavy sighs… It was not a happy conversation.

They were in her quarters on the station, a spacious suite with a large living area that was open to the sleeping section. The living room held a couch, computer console, and small round table with four chairs. The double bed under windows that curved overhead to give a view of the stars. The blocky pillows could have been square pillars covered in satin, but she’d brought her own pillows and her favorite stuffed animal. She’d also brought her own linens, and had stuffed away most of the generic, trendy decorations and replaced them with her own even more stylish stuff.

Dofrick spent a good deal of dinner examining a potted plant with a huge sipping-cup blossom. He wondered if it lured in unsupecting insects who were hungry for its pollen, only to find themselves the unwitting victims of nature’s cruel design. If so, he understood how they felt.

Finally, Gloria pushed away her desert, straightened her shoulders and declared, “Well, that Enigo is certainly suave, isn’t he?”

Dolfrick grunted and stabbed at his chocolate mousse, not an especially satisfying action when done against a silky pudding. The last thing he wanted, however, was to hear his sister “girl-talk” about a superior officer. It was bad enough watching her sigh over his guitar playing as he accompanied his daughter who played trumpet. He hadn’t known the chief of security had so much talent, but he wasn’t going to say anything with Gloria fanning herself.

Now, she sighed in something less than admiration. “Oh, come on, Dolfin. I’m not a silly teen anymore. Besides, I know he’s nursing a broken heart. Still it’s nice that he’s here and able to play for his daughter. Family is such a comfort in trying times.”

He screwed his eyes shut. He didn’t need to hear this. He wanted to leave, to envelop himself in the brief nothing of the teleporter process, disintegrating into kajilions of threads, each disparate and alone…

“I know Enigo doesn’t blame you. Nobody does. Just you, and that’s not fair to yourself, Dolfrick. You have such a, a freakishly amazing talent. That story Enigo told about you teleporting out altered DNA. I know how close to impossible that is. Seriously, I talk to teleporter officers.”

“You talk to everyone.”

“Uh, huh. And so trust me when I say that when they find out I’m your sister, eyes widen. They speak your name in reverent whispers. You are amazing, but you’re your own worst critic. You have to forgive yourself –”

Doflrick slammed his spoon down. “Enough! I have heard all the silver lining speeches already. I can recite them in my sleep. Is that why you brought me here. Did you think Miss Perky Positive could sweep in and cure all our ills with a motivational speech and song?”

Her eyes flashed. “No, Mr. Know-it All. For your information, it wasn’t my idea to make this stop. It was Marisol’s. So was his playing with her and going for drinks. I didn’t know you’d entered into one of your DOL-drums until I called the ship to see if maybe we could have dinner. So what was I supposed to do? Of course, I came to see if I could help.”

“Of course, you didn’t. You never ask. But you’re my family. I wasn’t going to leave you hurting and in pieces. So I came to help, like I always do.”

Suddenly, she was standing and leaning over the table, and her eyes were red with unshed tears. “What else was I going to do? You were just laying there, wrapped up in yourself and checked out from the world. Just like you always do. Just like you did when Mom died!”

She swept her hand at his dish, sending it flying. It thumped against the wall, leaving a dark chocolate stain. She’d spun and was staring out the windows, sobbing softly.

“You didn’t show up, not when she got hurt. Not for the funeral. Dad was a mess. It was all up to me. I had to make the arrangements and receive the condolences and stay perky and positive and then afterwards I get a call that you’re unbalanced and I had to take care of you. Did you give any thought to what you put me through? Where were you?”

“Father didn’t want me there,” he murmured.

“I wanted you there! I needed you, my big brother. You could have come for me.”

They fell to silence, regarding each other across a room yet separated by a gulf of pain, unkept promises, and too many words that had never been spoken.

Finally, Dolfrick asked, “And if I’d been there, what would you have done.”

Her lips quivered and she had to take a deep breath before answering. “I’d have screamed into the void and filled it with my grief.”

He nodded. “Change clothes. Something less flowy. And I need my clothes back.”

She sniffled and asked in a small voice. “Where are we going?”

As he changed clothes, he contacted the ship. “Lieutenant LaFuentes? I need a favor.”

Ten minutes later, the two had joined LaFuentes in the airlock.

“Dolfrick,” she said as she stepped into a harness and then shrugged it over her shoulders, “are you sure about this?”

“Don’t worry, Gloria,” Enigo said as he clasped her harness together in the back, then secured it to the wall, checking the clamps with a firm tug. “We do this all the time as emergency airlock training. We’ll keep pumping atmosphere. The pressure is going to change some, and there’ll be a heckuva wind, but you’ll still be able to breathe. Normally, the exercise is for you to close the door yourself, but in this case, I’ll shut it after 30 seconds.”

He checked Dolfrick’s rigging. He jerked his head toward Gloria who stared at the door, wide-eyed and trembling. “You sure about this, Chief?”

He shrugged. “Jenkins is standing guard down the corridor. Minion Tyler is in Teleporter Room Two. Anything goes wrong and he’s pulling you out. I don’t care if your sister is a teleporting virgin.”

When Enigo was on the other side of the door, Gloria asked, “So, when the door opens, what do I do?”

“Scream into the void and fill it with your grief.”

Again, her lips quivered, but she recovered more quickly. “In 30 seconds?” she quipped.

Dolfrick took her hand. “We will fill it together.”

“Ready?” Enigo asked over the intercom.

With a last smile at her brother, she shook herself and braced her feet. “Let’s do this.”

A red light started strobing in the room. An alarm sounded. Then the airlock door started to lift. As the void of space sucked the air from the room, Gloria screamed into the vortex. A moment later, Dour joined her.

It didn’t take 30 seconds to scream herself hoarse, but when the doors closed and the room was again atmo-normal, there was still grief to pour out. She fell against her brother, sobbing. He pulled her close.

“I’m sorry,” he whispered over and over, to her, to Loreli, to himself. And his tears flowed as well. They two sank to the floor, hugging and crying.

Enigo secured the outer door and unlocked the inner one. As he left, he told Minion Jenkins to make sure no one bothered them.