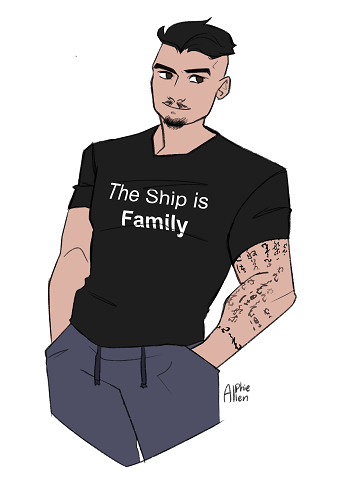 My second-born did this awesome character sketch of Enigo for me. You can commission characters as well at https://www.instagram.com/alphieallen/

They paused at a door. Enigo stopped Bobby from simply opening it and waltzing through. Doall took the side by the latch, while Enigo, the door itself. With a count of tres, he kicked it open, fell to a crouch against the threshold and scanned the hallway, phaser first. “Clear!”

“You don’t have to do that,” Bobby protested amicably. “Others came before us.”

Enigo pointed to the foil-hatted people lying on the ground. “No kidding. Listen, we advance and cover, got it? Me, then Loreli and Booby.”

“Doall, cover our rear. Doc, I guess you want to check the bodies? You’re with Doall, then.”

They advanced in leapfrog fashion, taking cover. The doctor set his scanner to its longest range and pointed it at bodies as they approached. After all, he wasn’t stupid. Why put himself in danger crouching over a body to check its pulse when he had the technology to do it from a distance? If a person was alive, he dragged them to cover while the others kept watch. Bobby followed Loreli as instructed, the whole time insisting their caution wasn’t necessary. Then, a shot scored the floor at his feet.

With a yelp, he dove for cover as Enigo tracked back the shot and stunned the gunman.

Enigo glanced at the cowering Bobby and grunted. “Huh. Guess you’re agile after all.”

“Lieutenant,” Doall called. In the fight, she had made a final dash to the door and was trying to get in. Around her, several bodies attested to failed attempts. The doctor was applying imposazine patches to those who were stunned. “We’re locked out.”

Enigo looked at Bobby. “You got a code?” Bobby looked up from the convenient and otherwise superfluous crate he was hiding behind and shook his head, Enigo yelled for Doall and the doctor to get clear. They complied, dragging the three bodies that were starting to moan their way to consciousness.

He swung the phaser rifle around and without any noticeable effort at aiming, fired at the door. It grew red hot, then disintegrated.

Enigo shouldered his weapon. “I don’t know if those boards were made from Jira, but that’s how you blow up something,” he told Bobby.

He grabbed the Filedesian by the back of his shirt and when Doall declared the room clear, pushed him to the door. He covered the rear until Loreli was through as well. As she passed he gave her his best rakish grin and a wink. She responded with the standard appreciative-in-the-face-of-danger smile, but there was a twinkle in her eye.

Seeing that twinkle gave him almost as much a rush as blasting through danger.

“Well, this was certainly helpful,” Doall sneered at no one in particular. She scanned the room for convenient vents, but the only ones were not even the size to let the ship’s katt crawl in. Apparently, Filedise did not follow the standard clichés for modern HVAC construction. Outside, the phaser fire had begun again, tracing a crosshatch pattern on the other side of the destroyed door. One beam made its way in and impacted at Loreli’s feet. She skipped away with a shriek.

Bobby, however, took a seat at the console and rubbed his hands together. “No, this is perfect. I can set the pied piper from here. If you could keep them from shooting me?”

Enigo growled in annoyance but took station at the edge of the damaged door. With his heel, he kicked the groggy Filedisian who was still shaking off the effects of phaser fire. “You! You heard him. Covering fire, now!”

Enigo saw movement on the catwalk, shot, and was rewarded by a yelp. Further down the hall, however, more bare-headed Filedesians were coming. “Doall, give him yours, then help Booby work faster.”

“How? With a motivational speech?”

From the console, the Filedesian said, “Oh, I like motivational speeches! And it’s Bobby.”

“He said they didn’t have a plan for when they trap this thing! Make a plan!”

Enigo turned his attention to shooting things. He thought he heard Doall say, “Yes, sir.” He might have heard her grumbling under her breath about the impossibility of the task. He ignored it. Doall excelled at the impossible.

“Sure, come up with a plan. His teams couldn’t stop the virus. HuFleet – nope. Even Filedise doesn’t have a solution, and it’s their planet. But I’m just gonna snap my fingers…”

Ellie stopped herself. People were depending on her – the whole Union, in fact. What was she doing being negative?

It’s my hair, she thought. All the phaser fire has charged the air and it’s staticy. I hate static. I shouldn’t have traded my last bottle of Calm Under Fire for extra toilet paper.

She pulled up the conveniently mirrored, high-backed office chair and sat, leaning forward so her head was below the top of the back to protect herself from stray beams. “Okay, Bobby, tell me something about this virus that the rest of the Union wouldn’t know.”

He checked that the program was running, then ducked his head. “We do apologize for the inconvenience…”

“We know it’s the Cybers. It’s not your fault you got attacked.”

“But we didn’t. You see… They were a customer.”

Yes, despite centuries of phaser use, they still said gunman. “Phaserman” sounds like a campy superhero, and “phaserperson” was just awkward.