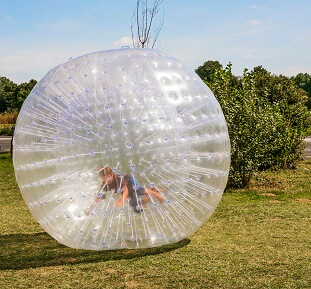 As McCoy might say if he were a writer, “I’m a writer, not an artist, dammit.” Alas, my vision for the image today turned out to be beyond my capability. So please imagine Ellie in this human hamster ball as you read on.

Enigo was right. They were close to the ground, and it was coming at them faster than Ellie’d imagined. The park near the headquarters building looked peaceful, even idyllic – if it weren’t growing closer at a rate of roughly 32 feet/second-squared. With a squeal, she slapped at the buckle on her utility belt. It immediately blew away from her and began to expand into a double-layer bubble around her.

Bubbleballs were originally designed for cargo drops. The object was surrounded by an inner bubble while an outer bubble filled with air around it. The material of the outer shell, however, contained an element that, when interacting with the air around it, created a layer of viscous material. Upon hitting the ground, it did not break, but rather bent, absorbing the impact, before pooling. Thus the object had a gentle drop to the surface.

Of course, objects couldn’t have all the fun, so the technology was adapted for sapient use, first as an extreme sport, then for military applications. Bubbles were less conspicuous than parachutes, and for most planets, environmentally friendly. Very important for invading forces to respect the environment where they could.

Ellie had never been part of an invading force before, but she had bubble jumped twice before – once in training and once while drunk. She decided she liked it better drunk.

The bubble landed smoothly with a gentle *pop* and disgorged her. She rolled to absorb the last of the impact than ran to the nearest line of bushes. Loreli and Enigo soon joined her.

“That was exhilarating,” Loreli breathed.

“We’ll do it again, sometime,” Enigo promised and before Ellie could do a double-take, he pointed. “Doc timed it good. There’s the landing pad. Let’s get closer. Follow me and keep to cover as much as possible.” He pulled out his phaser, nodded for them to do the same, then took off for the nearest clump of trees.

They crossed the park, hopped over a low fence that looked more decorative than anything, and ducked again into bushes, this time only yards from the landing pad. There were no guards, no patrol animals, no cameras to note their progress, much less sound an alarm. Ellie was starting to feel a little silly, especially when three people in casual clothes and no discernable weapons came out of the building and greeted the shuttle with arms wide in welcome.

As soon as the doctor exited, however, they sprang toward him, grabbing him by the arms.

“I told you!” Enigo said, even as he fired. They and the doctor dropped, stunned.

“Great,” Ellie said. “What do we do now?” But Enigo was already rushing toward the landing pad. She started to follow, then froze when she saw the doors to the building open and more people step out – these ones, armed. Enigo leaped and rolled to avoid the shots they fired.

Ellie crouched to make herself a smaller target as she took aim.

Suddenly from the other side of the landing pad, phaser fire streaked out and hit their attackers. They crumpled. Phaser fire began streaming from all directions. Enigo shouted a command, and she and Loreli ran to him. They grabbed the doctor and, since opening the shuttle doors would take too long, took cover under the shuttle between the landing struts. Flashes of lights lit the ground all around the shuttle as if they were in the middle of a lethal technicolor light show.

Enigo reached into his pocket and pulled out a hypospray. “Revive the doc.” Then, he crawled to the edge of the shuttle to shoot anything that might have noticed their escape. Or anything that came out of the building. Or anything that triggered his defense senses. He had the phaser set to stun, so why not? Better safe than sorry.

Ellie pressed the hypospray against the doctor’s arm. Almost immediately, he sat up, cracking his head against the bottom of the shuttle. He lay back down. “What happened?”

The doctor glanced at Doall and Loreli in confusion. “I don’t understand. I knew one of those men. Why would they attack me?”

“I don’t know, but there’s some kind of war going on, and I don’t know whose side we should be on. Ellie, can you get us back in the shuttle?”

“Through the head? The door won’t open.”

“It will partway,” Enigo said. “Try. Squeeze through.”

“Are you kidding? The bowl won’t recede unless the door opens fully. I’m not Gel!”

“Well, we can’t stay here. As soon as one of these two groups wins this firefight, they’re going to wonder where we went.”

“Fine, fine!” Ellie low-crawled. If she couldn’t move the toilet, she’d have to use the phaser and disintegrate it, and if she did that, everyone had better have ‘gone’ before they left because she wasn’t going to hear any complaints. “I need something to jimmy the latch.”

“Here,” Loreli reached into her uniform and pulled out a long, thin wire. “Good thing I’m doing some reshaping,” she said by way of explanation.

Ellie took the wire and started pulling it straight. She didn’t ask what Loreli was reshaping. Some things she just didn’t need to know. She poked the wire into a crack in the shuttle hull. Her makeshift lockpick was at once too thick and too bendy.

There was a roar of victory outside, followed by the thundering of footfalls.

Suddenly, someone stuck his head beside her. His skull was tightly wrapped in aluminum foil.  “Don’t shoot!”

The person wisely jinked out of the way in case anyone fired anyway. But Enigo simply replied, “Why not?” as he continued to scan for threats. Loreli, Ellie noticed, had her phaser pointed at the man.

The guy crouched lower and showed them his empty hands as a gesture of good faith. “You’re from HuFleet, right? Trying to stop whatever madness is coming from Filedise? We’re trying to do the same. We need your help as much as you need ours.”

When I outlined this, there was no firefight here. There was no toilet escape hatch, either. What can I say? I love when my characters run the plot.