Need to catch up? Find episodes and installments here. In the meantime, to sum up: The replicator prankster is not just on the Impulsive; Enigo & Loreli are in a secret romance, and Enigo was just sexually assaulted by the main course at a party and is in Sickbay after his security team shot it – and him – four times on Stun. 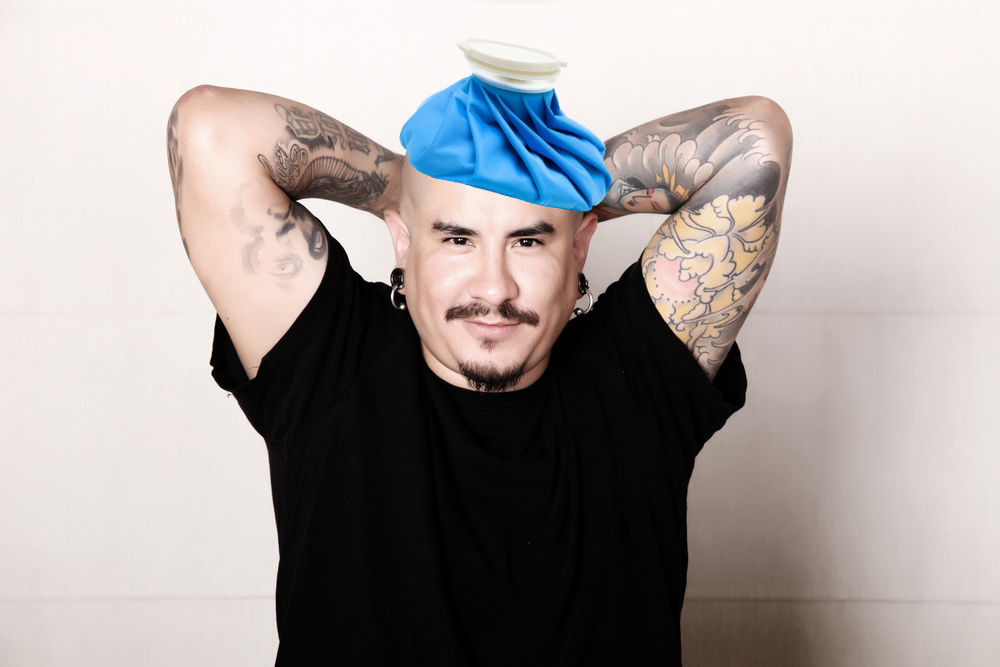 Enigo with an ice pack on his head

Captains Tiberius and Vizzini entered Sickbay, where they found the doctor arguing with Lt. LaFuentes about giving him something more for his stun symptoms while Loreli stood nearby, being beautiful and supportive and, Jeb admitted to himself, doing a damn fine job of not showing how concerned she was over her boyfriend’s condition.

“Ironically, if you had in fact been implanted with alien eggs, the next level dose would have dissolved them into an inert compound that you would pass harmlessly.”

Enigo paused to consider this. “Would it have helped my headache?”

“No. Now, lie down. The symptoms will pass in a couple of hours – less, with your…resolve.”

Jeb cleared his throat to get their attention. “Mind if we have a word with the lieutenant first, doctor?”

“As long as he doesn’t leave the bed.”

“I cleared him and he’s gone to warm up for the concert.”

“Excellent. Well, Lieutenant, please explain what you meant when you said we’ve been sabotaged. I can assure you our preparations have been under the tightest security.”

“Yes, sir,” Enigo said. In accordance with doctor’s orders, he did not leave the bed, but even though it was set to an upright reclining position, he was sitting up and perched on the edge, an effort which was costing him. A normal human would still be deeply unconscious after taking such a concentrated stun fire, but being Hood born and bred, he had an instinct to fight to consciousness under the most extreme circumstances, an instinct which paid off in the many gang fights and skirmishes that were a normal part of life on the Hood, but for which he was paying with the migraine of a lifetime.

He swallowed, took a slow breath against the nausea, and explained. “Not the experiment, per se, sir. The replicators. I heard you are having a problem with a practical joker? Us, too. I don’t think we can chalk that up to coincidence.”

“One tried to at once choke and smother me,” Enigo pointed out.

From where he was mixing chemicals in a beaker, the doctor said, “He’s not kidding. He had some impressive bruises on his neck.”

“Whatever the intentions,” Enigo continued, “the fact remains, that both our ships were affected, independently. Captain – captains – I recommend all replicator activities be suspended except for mission-critical components, and that those be double-checked before being used. And we should definitely alert HuFleet and see if any other ships have been affected. In the meantime, I’d like Ensign Sisco to coordinate with his counterpart on the Inconceivable to see if they can find any commonalities that will suggest how our ships came under the same attack.”

“Sounds prudent to me. Vizzini?” Jeb nodded, and decision made, the doctor returned to Enigo’s side, and insisted he lie down. Loreli moved in to help him ease back against the mattress, leaning forward just enough to allow everyone a peak at her perfectly sculpted cleavage. Jeb made a note how well she was maintaining her duties as ship’s sexy even while emotionally committed.

“I don’t see how it’s an attack,” Vizzini said, after shaking off the momentary distraction. Being a science vessel and not a combat ship, the Inconceivable did not rate a ship’s sexy. “Still, you know the old saying, ‘Never get involved in a land war in Asia.’ I’ll alert my ship to suspend replicator operations. However, I think we can hold off introducing our two CompuSec officers for a couple of hours, don’t you? Only, Rurr is part of the band, and they’ve been practicing this new set for a month now. Sopren’s weird new instrument is something that has to be experienced to be believed. You might say the sound is…inconceivable.”

Enigo winced, but then again, so did everyone else.

Dr. Pasteur cleared his throat. “If that’s all, Captains, I think my patient should take his rest.” He handed Enigo a glass with a cloudy liquid.

“Hangover cure – my great-great grandfather’s recipe. Not exactly meant for stun shots, but the symptoms are similar, so… Drink this down, then I’m going to give you a cold compress and you’re going to lie quietly with the lights low for at least four hours – one for each stun. If you sleep the night here, all the better. Understood?”

“Too bad, you’ll miss the concert,” Vizzini said. “Maybe we could pipe it in?”

“No,” both doctor and patient said.

He sighed, “As you wish. Though perhaps Lieutenant Loreli…?”

“I’d be honored, Captain.” Loreli finished smoothing a compress on Enigo’s forehead and patted his shoulder. Then, she slipped her arm through Vizzini’s and allowed him to escort her out. Jeb gave a nod to both Pasteur and Enigo before following.