I think my husband, who is wonderful and very patient, would agree that there’s a lot of me in Ensign Ellie Doall – including the martyr complex you get to read about today. I gave ti to her because she’s so far been pretty amazing, and every character needs a flaw or they risk becoming a Mary Sue. (For those that don’t know, a Mary Sue is a character, usually female, who is competent at too many things, usually physically attractive, and doesn’t realize how great she is. It makes for an annoying character…but it’s also a fun trope to play with! And I will be, promise.) 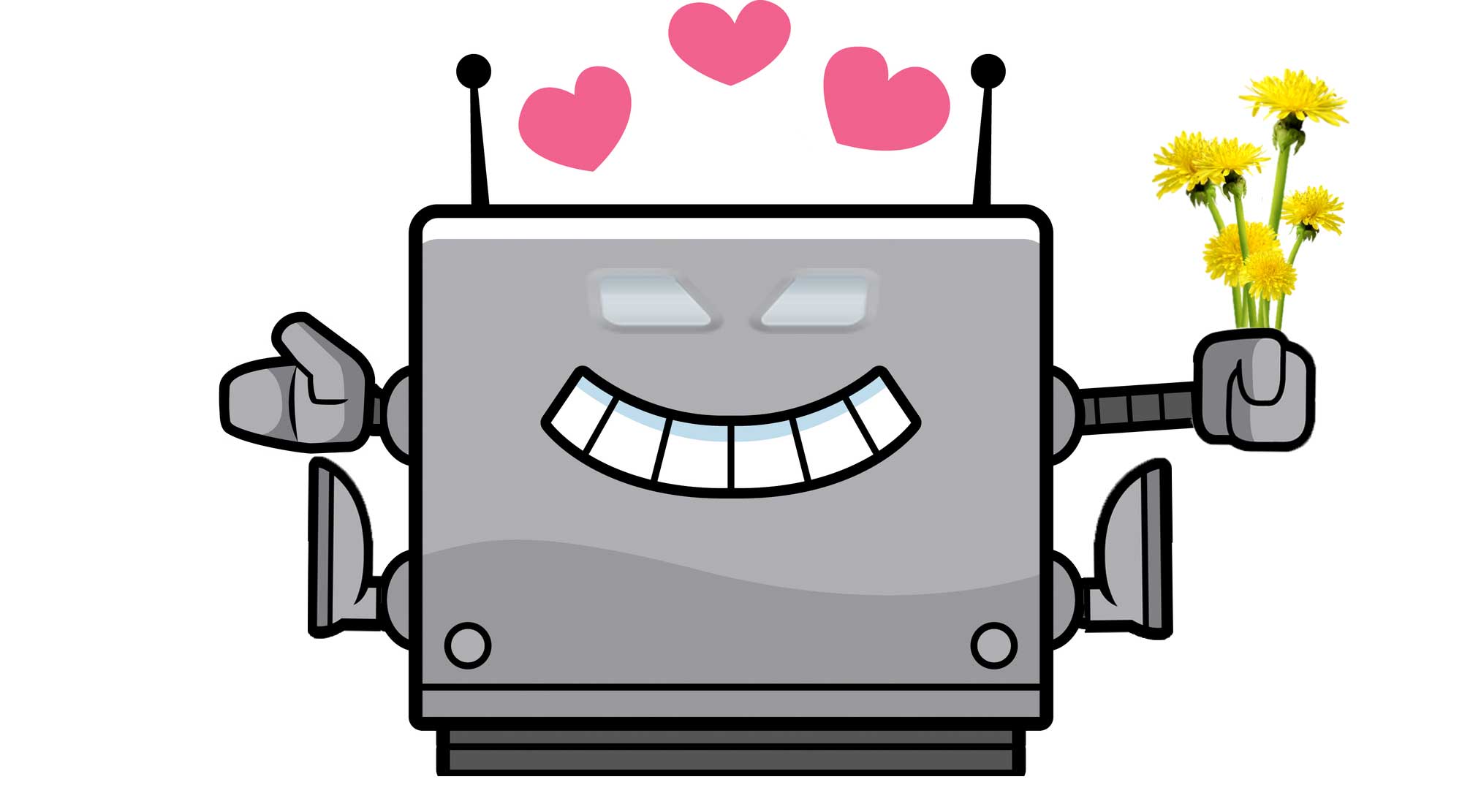 After a brief stop in the hydroponics bay, janbot arrived at its next destination – crew quarters. It detected a life form inside so rather than charge in, it bumped against the door, backed up, and bumped again. Then it retreated a few inches and extended its gripper arm which held an assortment of dandelions, which, even in a controlled environment, still grew like weeds.

The door opened, and Ensign Ellie Doall looked down and smiled. “Janbot, hi! Are those for me? You are just so sweet.”

Doall took the yellow blooms and rubbed them against her cheek. Janbot knew she loved the feel of the blossoms. She moved inside to let janbot in. “Don’t mind me. I’m just talking to one of my friends.”

As she returned to her vidscreen and showed off the flowers, janbot pulled back its arm, replaced the gripper for a sprayer and vacuum nozzle and started dusting.

The woman on the screen, also an ensign, was teasing Ellie about how machines loved her.

“And I love janbot! It’s practically the only thing around here whose job I don’t have to worry about. Seriously. I have to double check the B and C bridge crews’ work – not just ops, but Security and Engineering, too. Oh, and don’t get me started about shift change. It doesn’t matter how many times I tell people not to lean on the consoles, I still have to devote some attention to making sure someone’s butt doesn’t reset a station.”

Doall’s friend nodded excitedly. “Me, too! Last week, the first officer leaned on a weapons console, and I had to do some quick programming to transfer control to my station before we fired on the Porta ambassador’s ship! I mean, how does someone manage the precise sequence of touch controls with his buttocks?”

“Pilates? My captain could do it – on purpose, even. But I did finally train him out of the habit. I’ve got most of the crew trained, but every time someone newb gets a turn at the bridge, it’s the same thing over and over again. Kind of like poor janbot.”

Janbot gave a coo of agreement, and the ladies giggled. Janbot liked being part of the giggles.

“And if I don’t think fast enough, I get grief. You should have heard LaFuentes! ‘Where’s your miracle worker rep now? Need to read another book?’” She sneered it in the heavy accent of the Hood. “The Captain put him in a time-out, and then he came up with his own idea.”

“I had one but it would have taken some reprogramming of the transporters and taking the reverse warp engines offline, but why should I have to do everything? He’s the one who should handle hostage situations. In fact, the last time I was held hostage, he never gave me a chance to solve it myself.”

“But you’re so good at it! Remember that time on the Mary Sue when that intruder caught you in engineering just as you were going to foil his plan and he took you hostage? And the Captain had to lower her weapon or he was going to blast you? But then you used that moment of distraction to elbow him in the groin!”

“That was just lucky. Good thing Andailusians are all over seven feet – and that he wasn’t wearing a cup.”

“Lucky-smucky. You’re just awesome. You could do that with anyone, I believe in you!”

“Thanks, but it won’t happen here. Someone gets taken hostage, they just stun them both. You should hear Security. ‘Headaches save lives.’ Trust me, that’s enough motivation to never get taken hostage on this ship. Once was enough for me.”

The conversation then moved to Ellie’s dismal love life and how the only time she got flowers were from janbot. Proud as it was to bring a little sunshine into its favorite human’s life, it tuned out the conversation as it moved on to clean her shower.

“Is this foreshadowing?” you ask. Maybe, but you don’t think after hinting about how Ellie’s already been stunned while a hostage, I’d be so lazy as to do that again, do you? Anyway, that’s another episode – this is the filler, remember? Just a happy day in the life of a janitorial droid. So file this comment away under “payoffs Karina’s promised,” and tune in for the next installment next week.

If you’d like to help with the future episode, let me know in the comments or on Facebook the worst hostage clichés you’ve seen or read. As always, I have the RSS feed to remind you when the next episode is up, and my monthly newsletter, which is really more intermittent.