The Impulsive has been repaired, courtesy of the Clichan and Kandor empires. The Union has been informed of the battle and has dispatched a janitorial ship to clean up the debris from the battle before it becomes a hazard to travel, or attracts other Cyber ships.

As for our mission, there was a brief scare when the bride and groom had a fight the night before and called off the wedding, but the groom’s wise granny intervened with some timely wisdom, and the two made up just in time for the ceremony. It was beautiful. They wrote their own vows. Petru cried. Best of all, Lt. LaFuentes did not have to dash in at the last minute and throw himself at anyone’s mercy nor did Lt. Loreli need to inject herself with imposazine, although Dr. Pasteur did treat the wedding party to .1CCs each. Their skin never looked better.

The entire crew was invited to the reception, and since it lasts three days, everyone has gotten a chance to let off a little steam and enjoy our victory. With the Einstein batteries charged and Deary providing the specs, we were able to treat everyone to an earth delicacy. Stout. 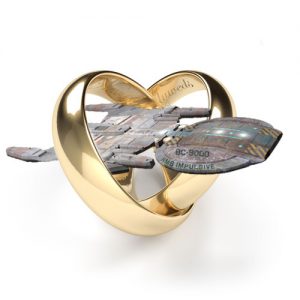 The grand ballroom held fifteen different buffet tables, three dance floors with different bands, and ten kegs from the Impulsive. Crew and natives mingled like old friends at the buffet tables and danced like they’d just met and wanted to get to know each other better. Deary held court at one large table where he’d set up a holographic display of the wikadas blade and was lecturing the engineers and military commanders who’d been invited on its many unique purposes. Dour, meanwhile, held another audience in thrall with the metaphysics of teleportation. He wore his black robes for the occasion; a few of the bridesmaids, watched him intently, their elbows on the table and chins on their fists, occasionally sighing dreamily. Wrapped up in his discussion of the Science and Dark Art of Transmitting Matter, he didn’t notice.

Meanwhile, Prince Petru’s blacksheep uncle, Sli, had cornered the captain and first officer to talk about the Impulsive and brag about his own military exploits. In between praising the beer, of course.

“Thish stuff is amazing!” he declared as he sloshed a mug of beer in Captain Tiberius’ direction. He was on his fifth pint and had already declared half the male crew his best friends and made passes at more than half of the female crew.

“I want to have more,” he said. “Long term, I mean. Shet up manufacturing, you know what I mean?”

“You’d have to take that up with Commander Deary,” Smyth said, leaning away from Sli’s breath. “It’s his family’s recipe. They have intergalactic patents, I believe.”

“Patent-schmatent. I’m sure we can come up with an equitable agreement.” Sli tilted his head back and drained his drink. Then, his eyes rolled into the back of his head and he fell backward. Some of the nearby quests squealed or yelped with alarm. A few of the Impulsive crew, who had had a couple of pints themselves, fell into giggles. Four servants set their trays aside and hurried to grab the unconscious man and carry him to his chambers.

Jeb tapped his comm badge, which only by coincidence looks like a beer glass with a six-pointed star. “Captain to the doctor.”

“I see him,” the doctor replied cheerily. “Nothing .7CCs of imposazine can’t help – five, if they want him to keep the hangover.”

As they watched the doctor follow the group out, Councilman Edor approached with Doall in tow. The ops officer was blushing even though she’s only had half a glass of Kandor champagne.

Endor said, “Captain, I cannot praise the brilliance of your crewman enough.”

“But, really, you already have,” Doall replied. With her eyes, she begged for the Captain to make him stop.

“But I agree. You did a hell of a job in the battle,” Jeb started, but Edor waved his hands dismissively.

“Battle, schmattle. I’m talking about how she planned to engineer the reunion of the prince and princess. It was sheer genius.”

“We never enacted the plan.”

“True, Ellie. Events took their own turn, but what you said in that briefing room. It was inspired! Inspired, I say. You have an understanding of our people that is unparalleled by any in your species. Captain, I’m requesting that you relieve Ensign Doall of her commitments to your ship and let her come to Clicha as your Union ambassador.”

“And Captain,” Ellie said, “I’ve been trying to convince him that I’m not senior enough. Besides, I like my job.”

From a short distance away, LaFuentes and Loreli sipped at their mugs and watched the goings on with amusement.

“Enigo,” Loreli said, “the Prince is happily married. I’m no longer under threat of his attentions. You should go have fun.”

“There’s plenty of security threats aside from Petru. Gotta stay vigilant. Besides, who says I’m not having fun?” he asked, but when she raised one perfectly pruned eyebrow, he relented. “Okay, fine. I’d rather be dancing. So, let’s go.”

“Enigo, my job as xenologist is to observe the rituals of other species, and as ship’s sexy…”

“…it’s to be competent, aloof and admired. I know. But you will be both better able to closely observe and to be admired on the dance floor. You’ve got to be a competent dancer. Come on. I know how to hurricane.”

Her face softened with surprise. “You know the dances of my people?”

“Claro. You think all we did on the Hood was fight? Come on, what do you say?”

“Well… if it would contribute to morale…”

“Certainly improves mine.” He held out his arm fist up so FEAR showed on his knuckles. She covered it with her hand and they moved to the dance floor.

The two took the center of the dance floor, raised their arms and began to sway in time to the music. Soon, others joined in. From where she rocked in Petru’s arms, Katrin pointed and giggled at the group. Petru whispered something in her ear, and the two rose to leave.

Now imagine the camera panning back from the happy scene: dancers, diners, and of course, the bride and groom giggling their way up the stairs. The mansion grows smaller as we rise, swallowed up by the city, where thousands of lanterns are being released into the sky in celebration. Next, the fireworks – watch out! – and then we are in space, where the Intrepid is stationed in orbit, always falling but never descending, hull new and gleaming, ready for its next great adventure.

Well, everyone! I hope you enjoyed the first episode of Space Traipse: Hold My Beer. As I’ve said, I’m writing this for fun, so what you are seeing is the raw, barely edited story coming straight from my mind… or out my butt, you decide. My mentor did tell me recently that I needed to reach deep inside myself, but that’s probably not what she meant.