By now, my family is “settled” in Florida, which means we’re in our house, with the dogs and all the boxes. I’m loading this ahead of time, and if I have time I’ll write a better intro, but if you are reading this, then you can guess I’m probably unpacking boxes and looking for a new job. As usual, if you need to catch up, check the episode list here. However, last we met, the Impulsive had used the wikadas blade to such great effect against the Cyber swarm that it had reformed into the shape of its own blade and now, the ships are braced for interplanetary chicken. 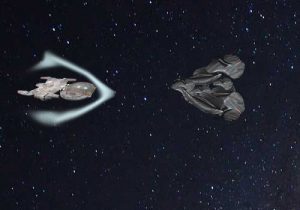 Imagine, if you will, two ships hanging in the blackness of space. Alone. Silent. The crew waiting with bated breath for the commands of their captains. If warp drives could rev, they would.

Okay, now hold that emotional image in your hindbrain because it’s good TV, but it’s not really what’s going on. In fact, on the Impulsive:

Smythe downloaded and encrypted the ships logs and deployed them by buoy and subspace transmissions.

LaFuentes was sending instructions to Deary, who was shouting to his engineering crew, who were scurrying about making untested modifications for the battle while wondering if the chance to visit the pleasure planet of Alura was really worth the equally sized chance of dying a horrible death by warp core breach, panel explosion or Cyber API.

Doall ran sensor sweeps and consulted with her team about new ways to disrupt the swarm’s communications.

In the transporter rooms, Dour’s team was making sure the Einstein batteries were fully charged and typing in modifications. Dour downloaded his last pattern into Smythe’s transmissions. If worst cam to worst, he would return.

In the bullpen, the second-string bridge crew had put away their air guitars and were catching up on what the bridge crew was doing in case, you know, someone died and they got to step up.

Cruz was wondering how he could rev the warp drive.

Captain Jeb Tiberius was thinking about the last time he’d played chicken. It had not ended well. His father had grounded him for the entire summer.

On the Cybership, the drones were all thinking, “We are Cyber. We are integrated. We will kick this frickin’ ship’s butt, then integrate it.” Of course, that’s not a direct quote, but if the Impulsive were to voice it for the crew, that’s about how it would come out, only Pulsie would not use the words “frickin’” or “butt.”

Jeb asked his crew, “Got my miracle yet?”

“Not until we are in contact with the Cybers,” Doall said.

“It’s tricky and untested, but what the heck?” LaFuentes added.

Doall sent a simulation to the captain’s console. He and Smythe grinned when they saw it. “That’s imaginative. Cruz, ready?”

“Dum vivimus vivamus,” he said, quoting one of the great space philosophers of his people.

Jeb gripped the arms of his chair. Smythe raised a brow.

“Your father isn’t going to ground you,” he said.

Jeb snorted. “Pa’s an admiral. Want to bet? All hands, this is the Captain. We’re making history or dying. Saddle up. Cruz, redline those engines.”

In space, no one can hear you rev, but the impulse engines went from zero to full that the astronomers on Clicha-Alpha-Two swore they saw the Impulsive buck and spring forward. Almost immediately, the Cybers reacted, racing toward them. At full impulse and then some, there was no time for anyone to have second thoughts or veer away. There was, however, just enough time for the Impulsive crew to enact their imaginative plan.

As the ship rushed toward the hive, the angle of the wikadas blade extended forward and rotated so it no longer met blade-for-blade. Meanwhile, the transporter crews pulled from the Einstein batteries to convert the energy they contained into matter – pure unobtanium, the hardest substance in the known universe – into a very solid blade reinforced by the deflector shields.

The Cyber intelligence barely had time to register surprise when the blade sliced through its shields and the first row of ships.

“Initiating spin,” Doall said, and the blade began to rotate, matter and energies bashing into the wedge-shaped hive from above and below and in between. When contact was made, the drones were treated to “Fibonacci Transforms in B-minor and C-major” by the Logic musician, B’Lather. Heralded by critics as “so complex and mind-numbing it may induce coma,” the composition came with warnings for non-logic species. Of course, logic-based species often shunned the song because of its insidious earworm quality.

As communication between the Cyber ships shut down, replaced by the song, Loreli made a note to add Cybers to the list of alien races that should never be subjected to the it. Or always. Can one adapt to an earworm?

Captain Tiberius frowned at the chaos on the screen as the Impulsive blended its way through the Cyber hive, which had become paralyzed beyond the ability to adapt or react.

“It’s almost tragic,” he said as Cruz swung the ship around to hit the hive from a new angle and LaFuentes took pot shots at the straggler ships. “Why hasn’t someone used this before?”

“FTBC is forbidden on all human ships,” Doall said. “We’re just lucky we have a Logic on the crew that’s a B’Lather fan.”

“Don’t worry, sir. We purged the ship’s systems as soon as we transmitted, and Ensign Ja’az is in isolation until he can stop himself from humming.”

“Sir,” LaFuentes cut in, “I think we’ve destroyed or disabled the last of the ships.”

“Really? That was easy. Anticlimactic, even.”

“Captain! The swarm has activated a self destruct –”

Before Doall could finish her sentence, the ship rocked as a handful of drones around them exploded. Immediately, red alert sounded. An engineering console sparked and electrocuted the crewman watching it. Immediately, three secondary crewman dashed out of the bullpen, two to drag their injured comrade to safety, one to assess the damage to the system and get it running. All three were too professional to yip with glee at the chance to be useful, but the two carrying the injured crewman to the lazivator did grin at each other when no one was looking.

Meanwhile, Doall reported aft shields down and damage to the engines. “That was the first explosion. The other ships were having problems concentrating through the song, but they’ve got it now. Next explosion in twenty…”

“Do we still have reverse engines? Cruz, get us out of here.”

“I’m trying, but reverse will take us back into the swarm. Even turning us around will expose our vulnerable parts.”

“Engineering is on it, sir, but they had a feedback surge from the explosion that’s wreaking havoc with the systems,” Secondary Crewman #3 called from his still-smoking console. He barely suppressed a squeal of glee over having spoken a whole sentence in this scene. His name would be on the credits of this report for certain, now.

“The Einstein batteries are depleted. It will be at least an hour before they can service my mistress again.”

While Smythe made a note to – if they lived through this – once again counsel Dour on his phrasing, the captain called for evacuation of all outer decks.

All eyes turned to the screen except for Doall’s, who was concentrating on the countdown, and our secondary crewman who was composing a hasty message home to tell his mom about his big day. If it was his last alive, he wanted her to know he died relevant.

On the screen, two Kandor ships and three Clicha vessels warped into view. They immediately extended their shields around the Impulsive.

Wrapped in a cocoon of five shields, the Impulsive didn’t even rock as the explosions sent shock waves through the system.

Princess Katrin’s face appeared on the screen. “Impulsive, are you all right?”

Captain Tiberius laughed. “We’ve been better, but we’ll live thanks to you. That was close.”

Katrin sighed. “I wanted to be here earlier, but Petru insisted we wait.” She looked offscreen with an exasperated but besotted smile. The viewscreen camera panned out to show Petru approach her side and take her hand. After giving her an adoring look, he turned a more serious, yet happy, one to the screen.

“Captain,” he said, “your crew has not only accomplished your mission, but saved our system. Let us escort you to the Clicha homeworld where you can make repairs. And, of course, you are all invited to the wedding!”

I know it’s June, but I am not going to make you sit through a wedding. If you really want a wedding story, check out Hearts Over Mind, a novella I wrote to finish out the Mind Over Trilogy. (But read the other three novels first so it makes more sense. Wink wink, nudge nudge.)

Next week, we’ll have the usual aftermath wrap up scene. (Spoiler – Dr. Pasteur does not die in it.)